The Oogieloves in the Big Balloon Adventure

EXPECTATIONS: Odds are pretty good that if you want to see The Oogieloves in the Big Balloon Adventure this weekend, you're not going to have much luck. Released last Friday, it's now widely reported as the biggest wide-release flop of our time (somehow surpassing even the Freddie Prinze Jr./Chris Kattan bomb Delgo). The Oogieloves is an original property from the mind of the man who brought us "Teletubbies." It's aimed at toddlers and it may or may not have hit lower. Luckily there's a bar right next to the theater and Happy Hour helps make any movie better (except Delgo). I know there are bright colors and singing and dancing, so as long as I don't think it's insulting the intelligence of freaking toddlers, I think I'll be okay.

REALITY: Goobie, Zoozie and Toofie are the titular Oogieloves. They're dead eyed, and their mouths never synch correctly to the words they're speaking. Each has a singular character trait, and by 'trait' I mean 'stereotype' and by 'singular' I mean 'offensive'. 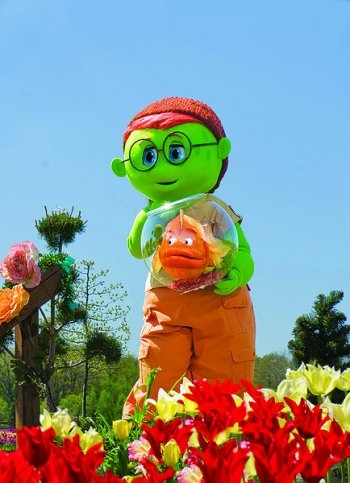 Kill me now.Oh, and by 'character', I mean 'I can't believe we're still condoning this dumb shit.' (Don't bother trying to figure out that sentence now, it's not healthy.)

We've got Goobie, who wears glasses and has the catch phrase "Scientastic!" He also gets quite flustered whenever something occurs that isn't scientifically plausible, which happens quite often. At one point, when it's discovered that one of the magical yellow balloons can talk, he nearly - and this is putting it succinctly - flips his shit over the shadiness of this. Mind you, he lives with a fucking talking vacuum cleaner, but... oh, whatever.

There's also Toofie, who is a purple chap that quite enjoys exercise, and he really enjoys climbing things. He shouts "Adventurific!" and has his pants fall down at least three times during the film. At this point, the other Oogieloves laugh and point, and the on-screen indicators encourage little kids to join in, emasculating Toofie further. Toofie takes all of this in stride; he's a better man than I.

Zoozie is last, and she's a girl. She likes hearts and is clever, I guess. Her big character moment is when she talks a puffin into flying, which is a triumph of spirit, etc, etc. Whatever, she's there because she's a girl and she can shout her catchphrase "Sparkleliciousness" at the drop of a hat.

The three Oogieloves live in Lovelyloveville in a house with J. Edgar, a vacuum cleaner with a bossy streak; Windy Window, a sentient window whose visual omnipotence is deeply disturbing; Ruffy, a fish who hates water (!); and Schluufy, a pillow who can only gurgle. Schluufy is like the Teletubbies' horrifying sun baby taken to a bizarre extreme, and I imagine Schluufy is supposed to be a sort of baby pillow itself. But then there's also the chance that he's been ritualistically lobotomized by the fellow housemates in a strange song-and-dance number that strings together words into nonsensical globs. Those pop up quite a bit.

The film is a combination of live action and puppets, with the main Oogielove trio crafted to appear like Mr. Potato Head's rotted siblings played by humans in suits. The world they exist in is awash in stuffed animals who've been lazily crafted into puppets, with most just sitting and staring at the proceedings in an unblinking, unnerving fashion. And again, their lip movements never match their speech. It's always pleasantly surprising when something as mundane as bad puppetry can transform itself into mind-bending horror with so little effort or intent.

The Oogieloves are celebrating Schluufy's birthday, but they accidentally lose the five yellow magical balloons that they're going to give him as a gift. Before he wakes up, they must traverse Lovelyloveville and recover said balloons. 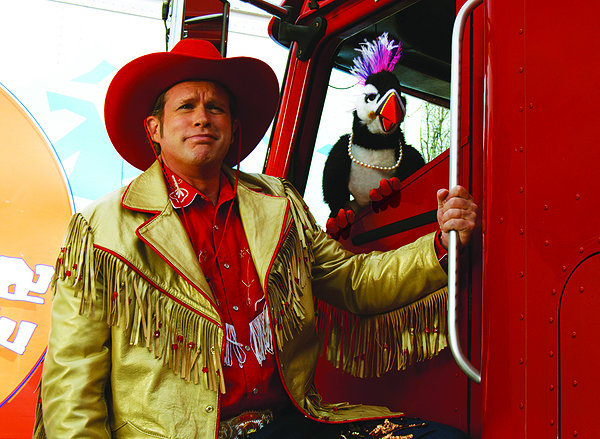 During this journey we have a dream cast from 1995 to carry the weight. We get bits from people like Chazz Palminteri (still alive!), Toni Braxton (still alive!), Cloris Leachman (who?), Jaime Pressly (still alive!), Christopher Lloyd (no dignity!), and Cary Elwes (still alive, and apparently sleeping with a puffin!).

Palminteri is at least funny as a man named Marvin Milkshake, who punctuates every sentence with a loud "OOH!", and Elwes, playing a cowboy who can't stand up straight and has a strange addiction to bubbles, seems to have escaped from Pee-Wee's Playhouse in the best kind of way. Lloyd, for his part, spends his screen time glaring at someone off-screen, who I can only imagine to be his agent.

What's deeply fascinating (and somehow troubling) about a film called The Oogieloves is that the movie offers a complete debasement of the word 'love.' Here it's used as an adjective, a modifier, noun, verb, whatever the hell they can wrap it around. The word is rendered meaningless, with every utterance demonstrating the film's complete and utter contempt for the notion. When you consider some of the crackpot sexual metaphors that emerge from some of the misadventures (don't get me started on what a character named Rosalie Rosebud is up to), you can tell that there was some twisted cookie working behind the scenes.

Kids in the audience won't pick up on this flimsy stuff nor, probably, will most adults. They will instead be assaulted with meaningless songs, lazy special effects, and colors so vibrant as to cause headaches. Will this film offer extremely small children a good time? Yeah, but I suppose by that measurement, forcing a child to dance at gunpoint while throwing Jackson Pollock reproductions at 'em with Katy Perry blasting nearby is of nearly equal value.

I know this movie is for toddlers, but even for toddlers, this is dumb. I'm aware that I'm tackling low-hanging fruit but, as been said here many times, saying your work is for children doesn't excuse shoddiness; it just makes it far more troubling. Someone decided to squeeze all they knew about children's TV into one long insipid pilot for a show that, thankfully, will never make it to air. There is nothing of worth in The Oogieloves, unless you really want to answer your child's question about why J. Edgar and Windy Window are both blushing while he's vacuuming her drapes.

MINORITY REPORT: In case you're interested, Sheldrake, my support group meets every other Thursday at the bar across from Toys 'R' Us. It's a safe place to talk out our aggression toward children's cinema. New members are always welcome. - Joseph "Jay Dub" Wade