EXPECTATIONS: Typically, I jump at the chance to go into a movie knowing absolutely nothing about it. The thrill of having no expectations whatsoever is becoming increasingly scarce in this world of pop-up ads, movie trailers and Taco Bell tie-in burritos. I should be excited for this, but rumor has it Branded is little more than a ripoff of John Carpenter's They Live. On top of that, early reports from our fearless leader himself are less than encouraging.

REALITY: It's always exciting when a new, unique voice in filmmaking comes along and tries to change things up a bit. The Movie Brats like Spielberg and Scorsese brought us a new way to look at classic film genres; John Hughes crystallized the experience of being a teenager; Branded writer/directors Jamie Bradshaw and Aleksandr Dulerayn apparently really, really hate advertising. (Editor's note: They're former/reformed (?) marketing executives!) They hate advertising so much that they made a movie about how invisible advertising demons are taking over the world. Allow me to repeat that statement, because it seems fairly important:


THEY MADE A MOVIE ABOUT HOW INVISIBLE ADVERTISING DEMONS ARE TAKING OVER THE WORLD. 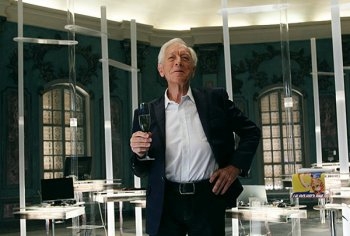 A toast to being as old as you used to pretend to be!Misha (Ed Stoppard) is one of the top advertising consultants in post-Soviet Russia. Along with lover and co-producer Abby (Leelee Sobieski), Misha sets out to create a reality TV show about fat women undergoing plastic surgery. Thanks to the machinations of a shady advertising guru (Max Von Sydow), Misha and Abby's show fails spectacularly, ostracizing them from the ad industry and forcing Misha into hiding as a cattle farmer. Misha then receives a vision (from a constellation shaped like a cow; a cowstellation) telling him to sacrifice a red cow, which suddenly allows him to see the root of all the world's ills: cancerous advertising demons.

This is not exactly a ripoff of They Live. They Live is a work of science fiction that features space aliens, underground armies, magical sunglasses, and the single best bare-knuckle brawl ever committed to film. Branded is something completely different. The general theme is the same and the trajectory is similar, but what separates this film from John Carpenter's unsung masterpiece is the fact that Branded is frequently idiotic, and almost entirely unwatchable. It seems to have its heart in the right place, but the film's insistence on shoving stilted flashback sequences into the story makes this a jumbled mess with no discernible direction and a message that any eighth-grader in the world could come up with.

The flashbacks alone deserve an entire review of their own just to explain how bizarre they are compared to the rest of this film's madness. Presented in 1.37:1 Academy aspect ratio, these flashbacks detail Misha's past as a historian who finds himself writing advertising copy for American ad executive/spy Bob Gibbons (Jeffrey Tambor). Narrating these sequences is a Sigourney Weaver sound-alike whose voice would not be out of place on a monorail PA system or Burger King training video. The whole production of these flashbacks is meant to be alienating and strange, but instead it lulls us into thinking we're watching the prologue to some micro-budget Russian soap opera.


Branded's central thesis is a simple one: Advertising is evil. The very people who sell us our favorite goods are constantly in a game of one-upsmanship with other advertising executives vying for our hard-earned dollars, and by hook or by crook, they will get our money. This film's view of humanity is dangerously cynical. According to this, consumers aren't responsible for their own fat asses, it's the ad executive who puts dangerous advertising into effect. The advertisers are the trendsetters, the ones who command us stupid cattle to consume whatever they put in front of us. Yes, advertising is what gets us to buy the things that we buy, but is it McDonalds' fault that I ate two whole Big Macs for dinner last night? No. It's my own damn fault for buying a greasy stack of meat twice in a row and then briefly considering a third. 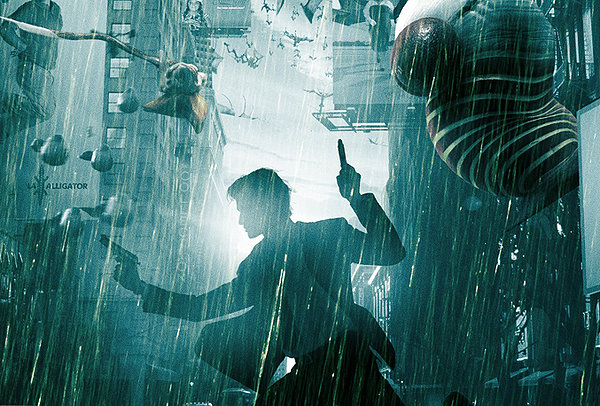 I don't even know what the hell I'm looking at here.

The film's final act involves Misha setting a plan into motion to take down the floating, CGI advertising demons once and for all. His plan is not the action-oriented invasion that we've come to expect from films like this. In fact, every bit of advertising you have seen for this film (TV ads, trailers, posters, etc.) is a lie. The poster image of Misha standing on a rooftop with pistol and axe in hand, ready to take down the demons, never once actually occurs in the film. There is no final showdown or last stand or all-out war; there is only the aggressive application of advertising tactics that may or may not go a bit too far. The CGI monsters make a number of appearances, but their brief battle in the skies above Moscow looks like a Thanksgiving parade gone horribly, hilariously wrong.

Truth be told, I was halfway expecting Branded to resemble the short film Logorama, a film that does more with advertising in fifteen minutes than this film can manage in 106. Instead, I was given a confusing mess starring a young Bruce Campbell clone ordering corporations to lie about their competitors. People dream about taking down 'The System' all the time, and many of them think they can do it by becoming part of the system, but despite what this film tells you, I'm willing to bet none of them ever took over the world because a cowstellation told them to.

Part of me does not want you to see this film. This review is technically a piece of advertising, and if you saw this film because of my review, I might feel tainted somehow. That is the part of me that has good sense and integrity and all that nonsense. Another part of me wants you to see this film, because my supreme confusion must be shared. If you value things like terrible art and bizarre filmmaking choices, you will probably not regret seeing Branded. If you're looking for a genuine good time at the movies, there is nothing here for you but the horrors of industry...

MINORITY REPORT: Finally, somebody else has seen the advertising demons! I remember once, Rutger Hauer appeared to me in a dream and said "Nice weather... for penguins." An obvious code to remind me that the cold war is not really over and I should reactivate my secret super spy abilities. I have now consumed over a gallon of Red Bull and am prepared to make use of my new wings by flying from the top of this building to Russia to steal their entire supply of Russian Standard Vodka! - Montague "Legally Sane" Smythe

Another noteworthy aspect of this film is the way it handles the convict between the shadowy manipulative antagonist and the hapless cow-guided protagonist: The two never interact or even know about each other. In fact, at the moment of greatest tension, one of them disappears in a lightning flash! It's never explained how this happened to a character not previously established to be supernatural, but obviously the implied answer is "because advertising." Also, the cowstellation winks at the audience! I laughed a lot. Bad Movie Rating: 48/50. -Andrew 'Garbage Day' Miller