From Paris With Love; The Red Riding Trilogy

Red Riding: Nothing to do with Grandma's House

EXPECTATIONS: The idea of a gritty noir thriller set in West Yorkshire during the notorious Yorkshire Ripper case might initially seem as though it would only appeal to those with a certain historical or cultural curiosity. However, these British TV films are now getting a limited cinematic release stateside, so how do they fare on the big screen?

REALITY: Based on the novels by David Peace, The Red Riding Trilogy is a bleak and tragic tale of corruption and murder. A serial killer is on the prowl in the West Riding of Yorkshire (The "red" riding of the title) and the only thing getting in the way of the investigation is the police department itself. Each of the three films follows a different character during a different year as they delve deeper into the case. Each film is helmed by a different director and offers a very different visual style, allowing each installment to stand alone. However, the trilogy should be watched sequentially and in quick succession, for it is only then that Red Riding's haunting story can truly be appreciated. 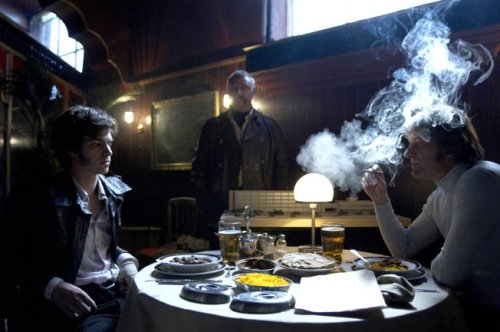 Because of this film, I am now deathly afraid of turtleneck sweaters.

In the first of the films, Red Riding - 1974, we follow young journalist Eddie Dunford (Andrew Garfield) as he follows the trail of missing children to the menacing John Dawson (a terrifying, turtleneck-sporting Sean Bean). This is by far the weakest entry, raising more questions than it answers, yet Sean Bean's presence forms the backbone of the entire trilogy, hovering grimly over all subsequent events. 1974 also introduces Maurice Jobson (the excellent David Morrissey), whose brief, heartbreaking appearance sparks the events of the following films.

In the second installment, Red Riding - 1980, Paddy Considine takes the lead as Peter Hunter, a police detective from Manchester brought to Yorkshire to track the Ripper, who is still on the loose. However, he soon hits a dead end in the form of chief inspector Bill Molloy (Warren Clarke) and his crew of corrupt lackeys, including Jobson. Considine makes for a much more compelling lead than Garfield, and his situation will leave that hopeless feeling in the pit of your stomach, especially as we realise just what he is up against. Compared to Eddie Dunford, Hunter has a lot more to lose and seems to be up against even worse odds. If you get the chance to see only one of these films, I'd recommend that it be this one. 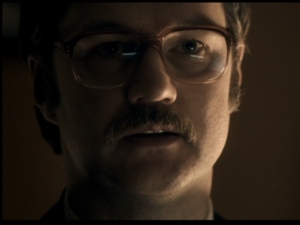 This man will win an Oscar one day, mark my words.Finally, Red Riding - 1983 rounds out the trilogy on a somewhat lighter, more optimistic note. The bleakness of the previous installments is still here, but now we have much more humour in the form of Mark Addy, the most likable of Red Riding's leads. Addy plays washed-up solicitor John Piggot, who gets a new lease of life when defending an innocent man, set up as a proxy for the police. We also see a change in Jobson; haunted by his misdeeds, he struggles against his conscience. In fact, it is his storyline and Morrissey's performance that really steal this one.

The only issue that could arise is if you can't manage to see all three episodes. I'd suggest nothing less than a long drive to the ends of the earth to catch the Red Riding trilogy, but that might be outside of your means (or just a bit inconvenient). I'm sure a DVD release isn't far off, though, so no one need miss out altogether on these superb films.

MINORITY REPORT: I don't normally watch foreign movies, but I checked out one of these (I think it was like 1066 or something). They didn't have any fucking subtitles! How the hell am I supposed to understand what they're saying? I don't speak German! -David "Data Core Devil" del Vacote III