AHHH HOLY HELL IT'S A GROSS-LOOKING THING! Now it's gone. Were you scared? No. Of course you freaking weren't, you've seen this cheap jump-scare move a million times by now. It's used to illicit emotional responses from audiences when you can't do it with story or characters or acting. Modern horror movies are taking their cues from the FWD: FWD: FWD: OMG YOU GUYS SOOO SCARY e-mails from the early days of the Internet, and I for one am sick of it. Insidious, this month's horror flick, looks to be more of the same, so I can't say I'm looking forward to this. However, it's also directed by James Wan, who directed the first Saw film (also known as the GOOD one), and it stars Patrick Wilson, who is famous for being all-around awesome in everything he's ever done ever, so maybe there's hope here.

REALITY: What happened here, exactly? How does a film start off so strongly only to nosedive into something so horrendous? It's not that hard to end a horror movie, guys. James Wan did it six years ago with one of the best endings in the genre's history. I'd compare it to last year's The Last Exorcism, but at least that movie had the decency to end the instant it became terrible. 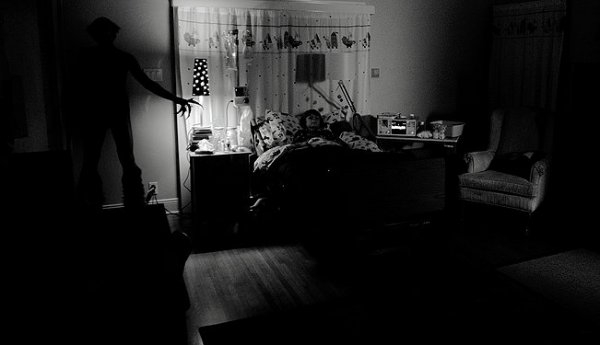 I'm getting ahead of myself here, though. Let's go back to the beginning, back to a simpler time, to a better movie. Insidious follows married couple Josh and Renai Lambert (Patrick Wilson and Rose Byrne), whose oldest son Dalton (Ty Simpkins) falls into a mysterious coma-like trance after an accident in their attic. Shortly after, Renai starts hearing voices and seeing mysterious figures, as horror-movie heroines are known to do. It's pretty standard stuff, but James Wan is good at it, and from the opening scene, which is brilliant and unsettling, everything seems to be set for a great ghost story.

James Wan knows how to play an audience, and he strings along the viewer's natural fears not so much by using the "jump scare" (employed sparingly, thankfully) but by creating genuine tension in the atmosphere. You know how sometimes you'll see a coat hanging on the wall, not doing anything, but out of the corner of your eye, it looks sort of freaky? James Wan says "Let's make that coat as scary as possible!" There's something inherently creepy about the creaks and noises of an old house, and even when nothing scary is evidently happening on screen, the tone of the film is so unsettling, you're still scanning the background, because something just feels wrong, even if you're not quite sure what it is. Because Wan uses non-traditional framing and camera work, even scenes of two people talking to each other feel slightly off, because subconsciously we know that one of them should be in the middle of the screen, and Wan won't do that. Because it plays with your brain in this manner, the film makes you think in every scene that something bad is about to happen. Unfortunately, something bad happens to the movie.

The issues start when Josh and Renai try to move to a different house. (That's right, folks. A haunted house movie where the characters actually try moving.) Without the inherent creepiness of that set piece, Wan can't use the subtle fear that I'd been praising until now. Josh's mother (Barbara Hershey) arrives out of nowhere with a spiritual psychic (Lin Shaye), and plot points are hastily brought in during the last half-hour with little to no foreshadowing. Before this, Wan created fear by refusing to show us anything scary, but then he starts throwing them out so fast you realize how ridiculous they are. Even our protagonist changes. Up until now, the movie focused primarily on Renai, then all of a sudden, as if James Wan watched The A-Team halfway through filming, Patrick Wilson is now the center of the story. 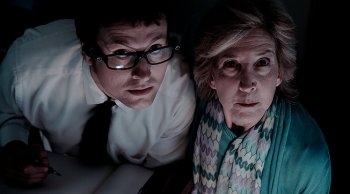 The more I think about the last half of Insidious, the angrier it makes me. Characters withhold information from each other with basically nothing to gain from it. The film's only 100 minutes long, but several times you're left wondering, "shouldn't you be done by now?" There's a scene in which Patrick Wilson breaks down crying while trying to communicate with his son, which should be touching. Instead that's negated ten seconds later when he decides to enlist the psychic's help after seeing a drawing of the demon on Dalton's bulletin board. Why didn't anyone notice this before? You clearly had to put that picture up yourself, Patrick Wilson, your son was in a coma when you moved here. I imagine we could have saved ten minute of movie if everyone had looked around the room.

"Your son is being haunted by an evil demon."
"Did you learn that by looking at all the different planes of projection in the universe?"
"No, there's a picture of a demon on the wall. It's even autographed. 'To Dalton, From Fire-face. Best Bros Forever.'"

Mostly, though, I'm just hurt that this movie misled me. I was all set to use the words "modern horror classic" to describe it, before it completely derailed on me. What was supposed to be a straight-ahead ghost story started to echo Saw in the worst way. It suddenly becomes about irony and bait-and-switch. The whole movie basically says "Haha! Fooled you! You're actually watching a movie about traps again!"

...Oh, I just got it. That's actually kind of brilliant.

MINORITY REPORT: I refuse to believe that James Wan is anything less than an absolute genius. For someone who has only made a handful of feature films, he's certainly consistent with quality. He's my favourite Asian-Australian-American filmmaker. - Ian "ProfessorClumsy" Maddison