EXPECTATIONS: Just the way to start off the new year: Bald-faced Oscar Bait that no one seems to be talking about at all. Granted, this has every opportunity to be one of those mythical hidden gems I keep hearing of, so maybe I ought to be thinking positive. After all, this sets the tone for the entire year. A crappy start to 2013 could mean nothing but misery for me at the movies this year. But Bill Murray as Franklin D. Roosevelt? Come on, his only competition at the moment is Barry Bostwick. I'm hopeful.

REALITY: It's a well-known fact that Franklin D. Roosevelt was very conscious of his public persona. Polio forced him into a wheelchair, but rarely would he allow himself to be seen in it. He believed it might be viewed as a sign of weakness at a time when Americans needed a strong leader. Hyde Park on Hudson offers a portrayal of FDR who believes that discretion is the better part of valor, but also that one good handjob deserves another. While the film's political backdrop would have made for a perfectly fine film on its own, the inclusion of the skeletons in FDR's closet throws a giant wrench into the story it's trying to tell us.

In 1939, president Franklin Delano Roosevent (Bill Murray) has retreated from the White House to his family home at Hyde Park, New York. There, as he tends to his country's political needs, he strikes up a relationship with his sixth cousin, Daisy (Laura Linney). As Daisy comes to terms with her role as the president's mistress, the King (Samuel West) and Queen (Olivia Colman) of England arrive for a historic meeting during which George VI must ask FDR for help in the coming war against Germany. 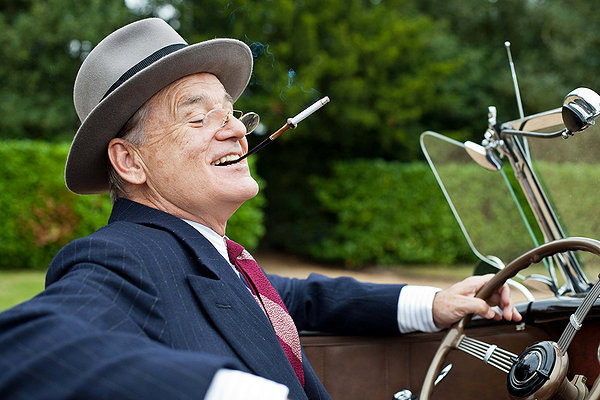 This second half of the story would have made for a perfectly fine film on its own, but instead it often takes a back seat to Daisy's story, one which she winds up narrating into oblivion. Daisy's narration is so overbearing at times that she even introduces characters through voice-over, when we would have learned their names in ten seconds. It's not like people were going to be confused about which character was the president's mother (hint: she's the only character he refers to as 'mother'). Daisy's presence in the film is not unwarranted, but her purpose becomes less clear as the story plays out.

Those familiar with The King's Speech will already have the political backdrop established for them; in fact, the film seems to bet on this. The King's insecurity about his speech impediment is all the characterization he gets, despite being one of the film's lead characters. He fears people see his stuttering as a sign of weakness, a fear FDR spends the entire film attempting to cure him of. As Roosevelt, Bill Murray turns in a nicely subtle performance, one which hides his baser desires behind a grandfatherly veneer. His FDR is the dirty old man everyone likes to joke about, but no one likes to deal with.

The one character trait at the heart of Hyde Park on Hudson, the thing that sets everything in motion and which tenuously ties the film together, is the way Franklin Roosevelt, America's most famous invalid, uses sex to dominate those around him. The film's pivotal scene comes early, as FDR drives Daisy out to a secluded field and convinces her to pleasure him. Aside from how awkwardly it's staged, with the camera down the hill from its actors and Murray bouncing in his seat like a jackass, this sets the tone for the entire rest of the film. Once he and Daisy become intimate, she falls right into his pocket, which is exactly where he wants her. 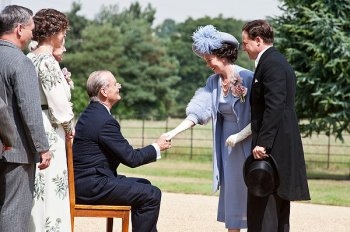 The King's Speech 2: The President's LegsNot only is it revealed that FDR shares similar relationships with other women, but he and his wife employ a similarly symbolic gesture to endear themselves to the King of England. At a heavily-attended picnic in their honor, the president looks on with glee as the King shoves a hot dog into his mouth. Sigmund Freud once said, "Sometimes a cigar is just a cigar," to which George Carlin once replied, "Yeah, and sometimes it's a dick!" Of course, the Queen knows this damn well, and most of the royalty's scenes together revolve around whether or not there's any significance attached to eating a hot dog. According to FDR, it's just what you eat at a picnic, but in the eyes of director Roger Michell, it's sexual domination through other means.

Despite all of this, Hyde Park on Hudson is not a bawdy film that wallows in its sexual undertones. Like the time in which it's set, it's a film very concerned with appearing clean and proper, almost as though it knows the only people who will be buying tickets are the people who actually remember when FDR was president. It's an unbearably cozy film about airing a dead president's dirty laundry, a fact made perfectly clear in a final title card that explains how anyone ever managed to dig up all this dirt in the first place.

It's also this title card that completely unravels the film's own message mere seconds before the credits roll. FDR explains to the King that people are willing to go out of their way not to notice their leader's personal flaws. This not only includes FDR's paralysis or the King's stuttering, but also FDR's marital infidelity. He says he appreciates living in an era that allows for secrets, which is insanely ironic considering the end title card, which explains that Daisy's recent death led to the discovery of her diary about her secret relationship with FDR. Taking in the film's complete message, we'll look the other way on your secrets and faults until the day you die, at which time we'll put them on display in the nearest multiplex for maximum profits. Did the film mean to be this baldly cynical? I'm betting not.

MINORITY REPORT: I'd like to point out that the adaptation of Mr. Wade's own diary, 'Songs a Farting Dog Taught Me', has spawned three sequels, two of which have earned Golden Globes. So don't be so down on Hollywood, Joe. Your dirty laundry becomes my favorite comedy. - Donavan Laird, Future Critic