EXPECTATIONS: Martha Marcy May Marlene is among the dozen or so films I regret not seeing before compiling my year-end list. Based on the trailer and the incredible amount of buzz, I'm anticipating this year's Black Swan, an impressionistic psychological thriller -- my favorite kind of film, for those of you not keeping score.

REALITY: Martha Marcy May Marlene abandons the flash and hurtling pace of Black Swan for different qualities that are equally rewarding. What begins as a languid drama about dysfunctional families gradually evolves into a hallucinatory, haunting thriller, a directorial choice that proves key in placing the audience square in protagonist Martha's shoes.

In the first act, Martha (Elizabeth Olsen) flees a commune overseen by the intense and charismatic Patrick (John Hawkes), makes it to a nearby town and phones Lucy (Sarah Paulson), the sister she hasn't seen in years. Soon, Martha is decompressing at a lake house owned by Lucy and Ted (Hugh Dancy), and while writer/director Sean Durkin is slow to reveal the nature of Martha and Lucy's broken relationship (or Martha's impetus for suddenly leaving the commune, for that matter), it's apparent that nothing is right in Martha's world as she descends into mania.

Seriously, it's nearly lunch time. You can't lay about in bed all bloody day.

Instead of demonizing cults as the media is so quick to do, Durkin successfully conveys why communal living and a leader like Patrick might be so seductive to outcasts like Martha -- he goes even further by daring to highlight some faint silver linings of a hippie cult like Patrick's, as Martha (at first, anyway) finds comfort in a makeshift family, value in her contributions to the commune and strength in an adopted philosophy that rejects materialism in favor of more earthy pleasures. (All of this is negated somewhat, of course, by Martha's disturbing experiences within the cult, but Durkin makes a strong argument that a commune free of psychological abuse could provide an ideal living situation for someone like Martha.)

By delaying the thriller payoff and denying us a conclusive ending -- Martha Marcy May Marlene is nothing if not slow-churning and ambiguous -- Durkin forces us to adopt Martha's perspective; as she confuses increasingly disturbing memories from the commune with the present, so do we, and when she begins acting out in increasingly bizarre ways, we understand why. 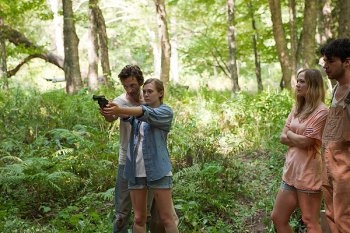 My, what a big gun you have!Such directorial choices are reminiscent of Take Shelter, which held us rapt until the very last frame as we guessed whether the protagonist's apocalyptic dreams were prophetic or delusional. Like Take Shelter, Martha Marcy May Marlene offers only a maddeningly subtle resolution that may not be a resolution at all. As I wrote in my year-end essay, intentional ambiguity is an admirable quality when done correctly, and 2011 has been a model year for well-constructed films left open for multiple readings; Martha Marcy May Marlene is no exception.

Of course, a film with such a shambling pace wouldn't be so absolutely thrilling if it didn't possess qualities beyond the mysterious. Rather, it's bolstered by strong performances and inventive cinematography that's perfectly suited for the material.

As Martha, Olsen says more in facial expressions and body language than actual words, and Hawkes, whose character requires him to find a delicate balance of charisma and menace, succeeds admirably. Dancy is the weakest link through no fault of his own. To advance the plot, the screenplay requires him to be a harping Brit whose chief complaint remains Martha's imposition as a houseguest through most of the film's running time; one would expect a brother-in-law to be a little more sensitive to his wife's concerns for her sister.

The cinematography is reminiscent of that found in '70s flicks -- cool, grainy 16mm -- which is important when one's making a film about a cult that functions beneath the guise of a commune. Like Patrick or the commune itself, the film stock is quaint and dirty; as fellow forums goon NeuroticErotica notes in a forum post " ... the way it's shot is pretty daring. They underexposed and lifted everything in post. All the blacks are greys and milky ones at that ... and it gives the impression that there's nowhere to hide." Such artistic choices, depth, craftsmanship and a charming lack of polish elevates a movie that might've been a melodramatic thriller -- right into the upper echelon of the 2011 films I enjoyed the most.

MINORITY REPORT: So when do Marcy, May and Marlene come into it? All I'm seeing is Martha Martha Martha! This is another one of those damn films where the title has no bearing on the actual film, isn't it? - Ian "Professor Clumsy" Maddison