EXPECTATIONS: With a new year comes a fresh new crop of films I have never heard of. I have, however, heard a bit of good buzz surrounding Kill List, albeit vague buzz consisting of little more than fifty people all saying, "Yeah, it's pretty sick." Cool, superstitious nerds like myself believe that whatever you do at the start of the year will dictate what you do for the rest of the year. Kill List, then, should set the tone for the last year ever quite nicely.

REALITY: Every once in a while a film will do something I absolutely love, which is play its cards close to its vest. Recently, viewers seem to need to know what's going on right up front, to the point where they openly mock films for trying something out of left field. My fear is that Kill List may be destined to become one of those films. Above all else, this is a subtle film, one that doesn't make its plot known until it becomes absolutely necessary. Not knowing this helps make it all the more chilling as we slowly start to piece together exactly what kind of film we're watching. 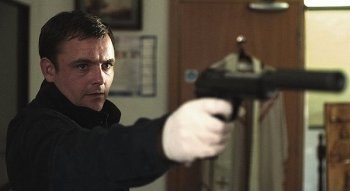 Yeah, whatever. Just going to nonchalantly shoot you and then go for lunch.Jay (Neil Maskell) has been out of work for nearly a year, a fact that's clearly taking its toll on his wife (MyAnna Buring) and son. When it seems like Jay will never find a job, his old friend Gal (Michael Smiley) stops by for a night of dinner and drinks. Gal offers Jay a job helping him out on some contract work, which he happily accepts. Only then do we learn that the two are hitmen tasked with taking out some local deviants. As Jay and Gal make their way through their kill list (oh hey, that's the title of the film!), it becomes clear that they're involved in something far more sinister than they originally thought.

If that sounds to you like the plot of every hitman movie since the beginning of time, then congratulations, you're one step closer to getting the most out of Kill List. Also, I don't want to be one of those film critics who blabs the whole plot and ruins it for everyone, so I'm trying to describe it as broadly as I can. Primer-esque in its scripting and tone, and clearly taking a bit of inspiration from '70s slasher films, this is a film that wears its influences like a badge of honor. Despite this, Kill List smartly plays down any attempts at referencing these films in favor of a more naturalistic approach, one which pulls it away from In Bruges territory and more toward [film title redacted].

Two of the film's greatest assets are its two leads. Haskell and Smiley develop a fantastic rapport over the course of the film, lending it a bit more gravitas when things take a turn for the disturbing. Smiley in particular is great; he's the closest thing the film has to a comic relief character. He plays Gal as affable without being jokey, the perfect foil to Maskell's more subdued, melancholy performance as Jay. It's a pairing that works marvelously, particularly in the second act as Jay and Gal go about their kill list. 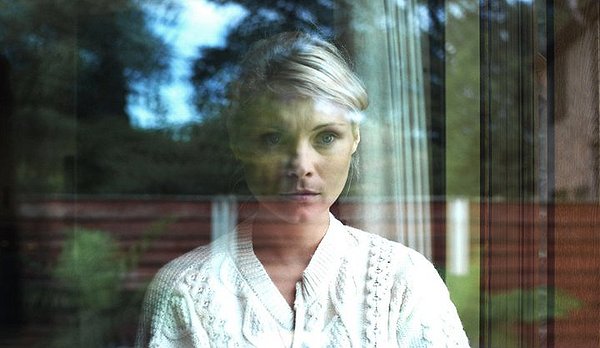 Those are reflections, she is not transparent.

In fact, the two are so good together that they manage to carry the film through some of its more obtuse moments. See, Kill List is at times so subtle in its approach that it becomes difficult to follow. The first act sets everything up perfectly fine, and the second act follows through in an interesting manner, but getting us to that third act (which is genius, by the way) feels perfunctory. I'm not asking that the film hold my hand as it leads me to the finale, but it would have been nice for a nudge here and there.

I'm having a bit of trouble explaining this film without giving away what makes it so good, so I'll just come right out and say it. Hopefully the God of Film Criticism will forgive me just this once. Basically, Jay and Gal go about their kill list fairly clinically, but at a certain point we start to realize that [plot point redacted], which seems to make sense, given that we know [character motivation redacted]. Knowing all that, the finale in which [entire third act redacted] becomes infinitely more terrifying than it otherwise would.

There, that wasn't so hard. All spoiling aside, the climax of the film is utterly disturbing given how relatively natural the entire rest of the film feels. More than that, though, it's a refreshing change of pace. By the time the third act begins, the film seems in danger of petering out. Here's a finale that not only works brilliantly, but also completely reshapes your perception of the rest of the film. It's a fair bet that many aren't going to like the way this film wraps up, and some may find the early killings needlessly brutal, but for those willing to stick it out, Kill List offers up a nightmarish experience that will likely remain among the year's most unique.

MINORITY REPORT: So this is kinda like Bangkok Dangerous meets The Wicker Man meets Bringing Out The Dead. Happy birthday, Nicolas Cage! This minority report is for you! - Martin R. "Vargo" Schneider