EXPECTATIONS: Seann William Scott's career never really lit the world on fire, did it? Well, now he's back as a hockey player who is really good at punching people. That's it, that's the premise of the film. Aside from the fact that this film looks like it would be more at home in the '90s, there's not an awful lot to be said about its lowest-common-denominator marketing strategy.

REALITY: Goon is... a comedy? It's hard to tell. It certainly bears all the hallmarks of a typical sports comedy, only it's not funny. The characters are endearing and well performed, but they're not funny. The situation is far-fetched yet life-affirming, but not at all funny. The whole thing feels like it's trying so damn hard to be funny and failing; given that description, you'd be forgiven for assuming I must have hated it. But here's the thing: I didn't. Goon works somehow. The elements gel, the cast is great and the crowd-pleasing climax is genuinely invigorating. But, it just isn't funny. 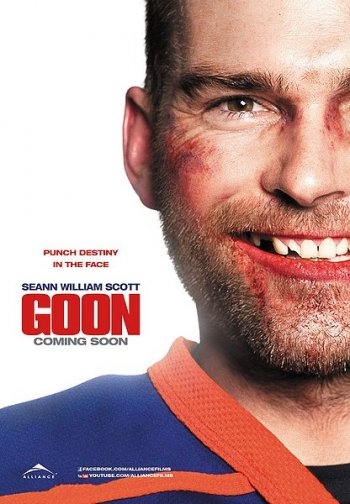 Urrrr, hey! How's it goin'?Doug "the Thug" Glatt (Seann William Scott), the titular goon, is a pub bouncer who is light on brains and high on brawn. His primary skillset is punching people's faces into oblivion, something he reveals to the public when he violently beats a professional hockey-goon for expressing homophobic sentiments, impressing the coach in the process. Before you know it he's learned to skate and started staining the ice with the blood of opposing team members. He's so good at punching people that he gets transferred to a formerly great Canadian team hoping to regain some of its past glory. As he and the team rise through the ranks, he anticipates a rink-based conflict with Ross Rhea (Liev Schreiber), the most beloved hockey-face-puncher-guy in the business, and develops a romance with the kooky and weird Eva (Alison Pill). None of this is funny in the slightest.

As the first act strolled its way casually across the screen, I was sure I was going to hate Goon and that the entirety of its running time was going to be excruciating. The simple reason for this is something I have already mentioned a few times now: It just isn't funny. The gags come thick and fast, but not one of them resembles anything we, as humans, truly consider funny. This is really not helped by the fact that screenwriter and extremely irritating character actor Jay Baruchel has cast himself as Doug's best friend and has given himself what he considers to be all the funniest lines. The problem is that his idea of a funny line is very similar to a non-funny line only with more swearing and screeching. The only logical conclusion to be drawn from this is that Baruchel is not a human, but rather some kind of gangled alien beast who has written this film about humans based on pure observation. If that truly is the case, then it is very well observed. Not funny, though.

About halfway through the film, I started to wonder if it was actually supposed to be funny. Surely something this well constructed is not so misguided as to be operating under the assumption that it is funny? The performances are spot-on. All expectations of what Scott's presence might mean to the film are out the window when we realise he is turning in a quite brilliant performance. If anything, his performance is too good. He is so immersed in the role that it is rather perfectly awkward. Scott looks uncomfortable in his own skin, mumbling lines that are deliberately lacking in wit; he's a hard protagonist to latch oneself onto, for lack of a movie-star personality. This is a performance that nobody would have expected from Scott, especially in this film, but that is the beauty of it. Eugene Levy, as Doug's adoptive father, fills his usual role via the magic of typecasting, yet even he delivers a nuanced performance that you don't really expect. Sadly, none of them are funny. 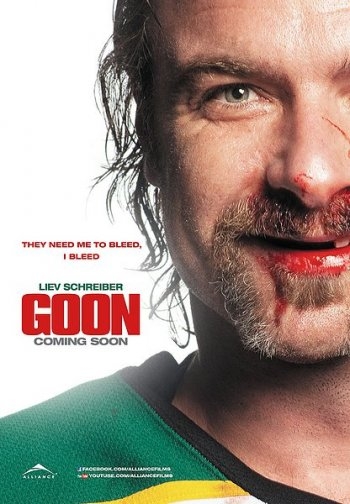 Duhhhhh, yeah! It's goin' good. How are you goin'?Also effective, if not funny, are the character dynamics. The romance between Doug and Eva is quite affecting, avoiding cliches to make the characters as human as possible. Alison Pill's performance is charming, and she's the kind of slightly odd character actor that I find so effortlessly compelling. That they manage to make this on-screen couple work with all the awkward dialogue and situational nonsense is a testament to the chemistry of these two actors and the director who brought such incredible performances out of them. I guess nobody told any of them that this film just isn't funny.

Ross Rhea makes for one of the most unusual antagonists to ever grace a sports film. In fact, one can hardly describe him as an antagonist at all. He and Doug share a mutual respect, and they even offer each other wisdom of sorts, for which they are each grateful. Their final conflict is not one of good versus evil, but simply an inevitable display of sporting prowess. I know nothing of hockey, but apparently it is quite acceptable for players to remove their gloves and punch each other's teeth out in the middle of a match. The final graphic act of blood-thirsty face-pummeling is a wonderful statement on the expectations of sports crowds and, indeed, film audiences who love a cathartic display of blood-letting. The feelings of those who do violence professionally are not themselves violent, but more akin to the feelings of an artist who is proud of a particular piece of work. A great punch is as good as a great film.

The only real problem with any of this is that it isn't funny.

MINORITY REPORT: One would think a Pineapple Express alumnus could co-write some jokes. Oh, well; at least Goon beat Hit Somebody to the punch. It's drawing some comparisons to Whip It, which means it might actually be worth seeing. Besides, I sometimes doubt Ian's ability to "get" American humor. - Sean "Keanu Grieves" Hanson