EXPECTATIONS: Have you ever looked at a movie poster and immediately rolled your eyes at how boring it looks? (Of course you have, you're reading Current Releases; that's all our kind ever does.) Well, that's how I felt staring down the poster for Contraband. "Oh look, Mark Wahlberg's doing a crime thing. And he looks seriously concerned about it. What else is new?" Maybe that isn't the most positive thought to take into a movie, but it's January and I'm keeping my expectations low.

REALITY: I can think of no crime thriller more competent in its production, nor one more thoroughly boring, than Contraband. Here's a film that has all the elements of a proper heist picture, and yet absolutely no flavor to make the thing come alive. Imagine you're at the grocery store buying tonight's dinner. You decide that soup sounds pretty good, so you pick up a couple cans of vegetable beef. Then you remember you're all out of ketchup, so you grab a bottle of Heinz. Then you get home, heat up your soup, fix a grilled cheese to go with it, and then suddenly you realize that both your soup and ketchup are the 'No Salt Added' variety. Your heart crushed, you decide to soldier on and eat the tragically bland meal anyway. That's what watching Contraband feels like. 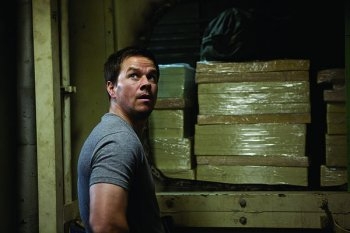 What's in the box, Mark? Some kind of contraband?The film follows Chris Farraday (Mark Wahlberg), a home security contractor who is forced to embark on one final smuggling run in order to save his kid brother-in-law (Caleb Jones) from a local drug dealer (Giovanni Ribisi). The job: hop a container barge to Panama City and acquire several millions of dollars in counterfeit bills. Along the way, Farraday and his crew must contend with a Panamanian crime boss (Diego Luna), the barge's cantankerous captain (JK Simmons), and the watchful eyes of both the Border Patrol and the local police force. Meanwhile, Chris tasks his friend Sebastian (Ben Foster) with watching after his wife (Kate Beckinsale) and kids while he's out on the job.

To the film's credit, the cast largely does a fine job with the material. I say 'largely', because it becomes clear pretty early on that Mark Wahlberg decided to stick himself on Action Hero Autopilot for this one. On the other hand, Ben Foster and Giovanni Ribisi definitely dial up the intensity. These two play a bit of a cat-and-mouse game in one of the film's subplots, and they're both so good in their roles that it's a shame the movie isn't more about them. Ribisi in particular makes for a great villain, but the film isolates him to phone calls and brief appearances that only exist to remind us he's the bad guy. It will be a damn shame if this man doesn't land a stellar villain role in the near future.

When it comes to the activities in which these characters are engaged, though, the film seems to fall apart. It's not apparent what kind of job Farraday is pulling until he's in Panama with the money in hand. He drops hints of "the job" or "the money," but the first half of the film keeps things so vague that one might assume Farraday literally got a job in Panama to raise the money he needs. Maybe it's because we're becoming conditioned to films constantly reminding us of what's going on, but I blame Aaron Guzikowski's screenplay. He includes scenes of exposition, but it's all structured to keep us in the dark as long as possible with no foreseeable payoff.

Speaking of structure, one thing that stood out to me about Contraband was how the main plot of the film is basically set up as a series of nested heists. There's the main job that sets everything in motion, then the job that Farraday embarks on in order to resolve the first job, then a third job he's forced to take on when complications arise from the job he's presently working, and so on. Things get so entangled that we almost lose sight of the original goal.

In that way, I believe Contraband is the closest any film has come to aping the plot and structure of a Grand Theft Auto game. Forget the weapons, forget the pickups, forget Crank; I'm talking about plot. If you took this film and adapted its story into a video game, you would have GTA: Panama. I doubt that was the filmmakers' intent, but they've wound up making a heist film so hellbent on following the genre's formula that they accidentally filmed the quintessential Rockstar Games movie.

It's also like Grand Theft Auto in the sense that little of what happens feels vital. Mark Wahlberg goes to a warehouse somewhere and tries to get a thing; but he can't, so then another thing happens (I think this was also the plot of The Italian Job, possibly Three Kings as well). The plot zips along just fast enough for us to keep up, but not slow enough for us to ever really connect.

MINORITY REPORT: Remember how Will Smith used to release rap singles for all his movies? I want to start a Twitter campaign to get Mark Wahlberg to start doing that. - Martin R. "Vargo" Schneider