EXPECTATIONS: The Artist has, quite possibly, the best trailer of any film I have seen this year. What's not to love? Dancing, a funny dog, James Cromwell, a funny dog. That fact that this is a silent movie being released around the same time as Hugo lends it a timely feel as well, and the buzz surrounding The Artist is more than enough to raise a little interest. I can't wait to see this. 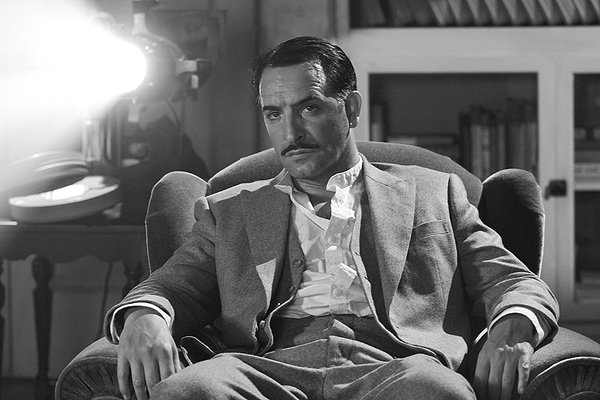 This is how I watch every film.

REALITY: It's hard to sum up a film as brilliant as The Artist without sounding like a screaming teenage girl at a Justin Bieber concert. Rather than pretending to be a silent film for the sake of nostalgia, The Artist uses silence and sound in ingenious ways to tell a story about a specific era in cinematic history that could easily be applied to the present day, all while being absolutely hilarious. Speaking of hilarious, it has been pointed out that I am not funny enough in my reviews, so to remedy that I will be writing this one with the help of a trained comedy dog.

Silent movie star George Valentin (Jean Dujardin) is on the top of his game when he meets hopeful young actress Peppy Miller (Bérénice Bejo) and, perhaps, falls for her. As time passes, he is informed by his longtime boss Al Zimmer (John Goodman) that sound is the way forward and that the studios will get new talent if he won't cooperate. Valentin refuses to have anything to do with the new era of sound and decides to produce and direct his own silent movie, only to find that it opens the same day as Peppy Miller's new sound-based blockbuster "Beauty Spot." As he slips into depression and alcoholism, he loses the loyalty of his long-time assistant Clifton (James Cromwell) and tests the limits of his relationship with his closest friend known only as The Dog (Uggie the dog), who is a dog, just like my trained comedy dog. 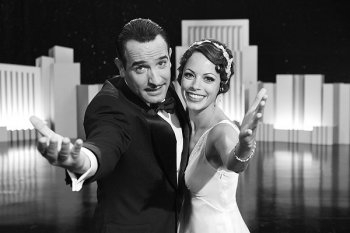 Bravo!The cast is excellent, particularly Dujardin, who has a great chemistry with everyone he comes across. His romance with Peppy Miller, his professional relationship with Al Zimmer, his friendship with Clifton and even his strained relationship with his wife are all wonderfully realised. Valentin is such an endearing character throughout, probably because he has a trained comedy dog, just like me.

While The Artist uses the cinematic techniques of the time it depicts, it is actually a cunning disguise. The cinematography and editing feel very modern, in spite of being black-and-white in a 4:3 ratio with dialogue displayed in intertitles. The works from that era would never have this many setups within single scenes; also, they would be more sparing with dialogue and would not include quite so many post-production effects. Those were simply the restrictions of the silent era. By not deliberately restricting itself, The Artist allows itself to have fun with the silence and go all out with with visual storytelling techniques. Intertitles obscure the action in interesting ways, and extreme close-ups on chattering mouths cause discomfort in the protagonist and the audience.

The thing is, The Artist isn't really a silent film at all. It is presented as one, certainly, but in a few key scenes there is sound. The strange thing is, as unusual as watching a silent film feels in this modern age, we quickly grow to resent sound right alongside Valentin until we can learn to embrace it. It also draws influences from films outside of the era, most notably Citizen Kane and (obviously) Singing in the Rain. Isn't that right, trained comedy dog? "Woof!"

And that's what the film is about, really; embracing a new way of doing things without completely eliminating the old ways. The Artist asks why the hell can't we make silent, black-and-white movies these days? Just because the technology allows us to put those things behind us, doesn't mean we should. Hell, let's synergise. We can make silent films that have sound in some scenes, why not? Not everything has to be cutting edge if it doesn't serve the point of the film. We have more than a hundred years of cinema history to draw from, why not use it?