The Lego Movie; The Monuments Men; Best Night Ever

EXPECTATIONS: Once again, we have a film that was meant to be an Oscar contender, but wound up getting packed up and exiled to the barren wastes of Midwinter. George Clooney claims some CG effects weren't quite finished and that they simply couldn't decide on a proper tone. Would The Monuments Men be better suited as a drama, or a comedy? This is a question every director should ask themselves about their World War II film, in which several characters almost certainly die a gruesome, painful death.

REALITY: Landing squarely in the middle of the Comedy-Drama spectrum, The Monuments Men loses quite a bit of its impact by trying to have it both ways. The film features some of Hollywood's most reliable funnymen and an Alexandre Desplat score that was lifted straight out of a Wes Anderson movie, which keeps the tone remarkably light. On the other hand, the film is about seven men working to rescue art from the worst cultural arsonists in modern history, with all the bloodshed and heartache that such a story entails. In other words, The Monuments Men brought a Bill Murray to a gunfight.

In the waning months of World War II, Lt. Frank Stokes (George Clooney) brings an issue to President Roosevelt's attention. Countless art pieces, sculptures and historically significant buildings are being torn down, stolen, or otherwise destroyed as the Nazis retreat back into Germany. In order to rescue the Western world's cultural heritage, Stokes enlists a crack team of the oldest, goofiest intellectuals he can find. Their mission: To enter France and track down priceless works of art stolen by the Nazis before Hitler orders it all destroyed. 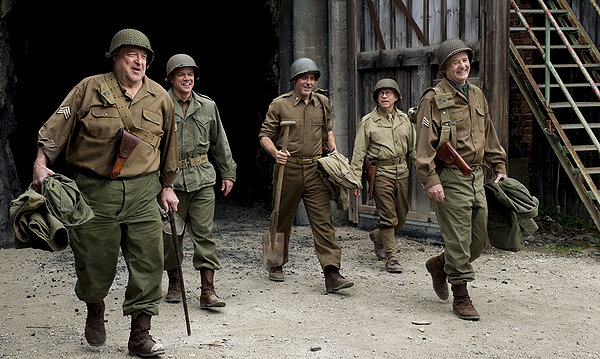 Hah! We just made art!


Joining Stokes in his mission is art historian James Granger (Matt Damon), who helps his round up their team of artists, collectors and soldiers. Among them are characters played by John Goodman, Bill Murray, Bob Balaban, Hugh Bonneville, Jean Dujardin and token young person Dimitri Leonidas. The team's names and roles aren't particularly important to this review. They're not all that important to the story either, since the film bounces between five different subplots so frequently that most of the characters only come across as vague sketches of the actual people they're portraying.

Not only does George Clooney star in the film, but he also writes and directs, which is a pretty decent indicator of how thin The Monuments Men spreads itself. At just a hair under two hours, there is simply not enough time for the film to flesh out all of the characters it introduces, nor does it lend any given subplot the kind of dramatic weight it deserves. It's almost as though the film realizes its characters are less important than the actors portraying them. Do you want to see John Goodman and Jean Dujardin buddy up on a caper across Nazi-occupied France? Of course you do! Are you invested at all in the lives of Sgt. Garfield and Lt. Clermont in their search for stolen art? No? Didn't think so.

The narrative backbone of the film involves Granger working with a Parisian museum curator named Claire (Cate Blanchett). Here, we see Claire dealing directly with the Nazis in charge of stealing France's art, as well as her begrudging partnership with American art collector Granger, which quickly blooms into a tentative courtship. This is where the film stakes out its central thesis: While the rest of the Monuments Men battle their way through Europe to reclaim stolen art, these two work to restore some sense of normality to a war-ravaged society. 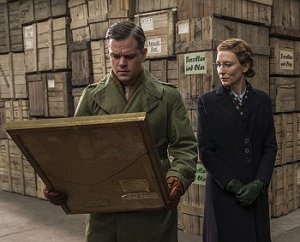 A priceless Alan Smithee painting of unknown origin.One of the film's more stirring scenes finds Granger returning a portrait of a Jewish woman to the home it once belonged to, the rooms completely ransacked. As he hangs the portrait on a bare wall, Claire asks him why. The family isn't coming back, after all. He turns to answer her, and in that moment, we see the opposite wall littered in Nazi graffiti. "This seemed like a good place to start," he replies. The soldiers fight to win the war, but it's up to the people to fight for civilization, to keep ourselves from slipping back into the darkness.

And yet, for all the film's posturing about risking life to protect the sanctity of art, The Monuments Men certainly has a funny way of showing it. Clooney fills in his World War II picture with heavy shades of Indiana Jones, Saving Private Ryan and his very own Three Kings, almost leaning on certain beats from those stories like a crutch. Other times, the film resembles the least educational PBS special ever. Entire scenes take place in giant rooms filled with the world's greatest art, but all anyone can talk about is Hitler this and Nazis that. One thing is certain, though: George Clooney sure does love filming himself standing around in a room full of statues.

What The Monuments Men desperately needs is a director willing to commit to a tone. Either make this the serious rumination on the value of art that it so clearly wants to be, or make it the bright, bouncy caper that it constantly threatens to become. I would chalk this up to Clooney and co-writer Grant Heslov being too in love with their script to make changes one way or the other. With a cast as good as the one they've assembled, it's a shame that the film doesn't leave a more lasting impression.

MINORITY REPORT: I don't know why George Clooney would screw with the formula when all we want to see is the Ocean gang trekking across a war-ravaged Bill Murray. -Sean "Keanu Grieves" Hanson