This Is Where I Leave You

EXPECTATIONS: From what I can tell, this is going to be baby-boomer soft-shlock with Gen-X vulgarity. But it has Tina Fey, who I adore, and Jason Bateman, who I've grown to detest over the years. I can't...wait?

REALITY: Pick any creative writing MFA program in the country and ask the guy in the burnt sienna cardigan to open up his messenger bag and I guarantee you'll find a novel or screenplay virtually identical to This is Where I Leave You. 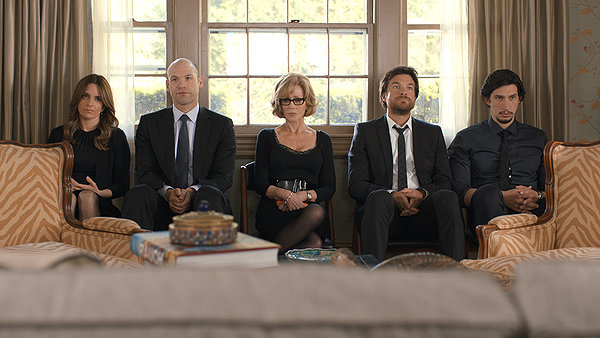 This Is Where We All Stare At Nothing Together.

Judd (Jason Bateman) comes home to his too-nice apartment from his too-hip job to find his douchebag boss (Dax Shepard) boning his wife (Abigail Spencer). He makes the Jason Bateman sad-face", then wakes up with a beard and his dad has died. I'm sure these things are unrelated. He returns home to Suburbia to sit shiva with his sister Wendy (Tina Fey) TMI-sharing mother (Jane Fonda), screw-up younger brother Phillip (Adam Driver), and bald older brother Paul (Corey Stoll), who's married to Judd's ex-girlfriend Alice (Kathryn Hahn). Drama ensues as old loves, including head-injured Horry (Timothy Olyphant) and Manic Pixie '80s Girl Penny (Rose Byrne), come back into focus and as everybody reveals that their lives are - spoiler alert - complicated.

I'm pretty good at suspending my disbelief and trying to watch a movie for what it is, but something about This is Where I Leave You kept leading me to other imagined tangents, many of them Arrested Development related. I kept re-casting Jane Fonda as Jessica Walter and Corey Stoll as Tony Hale. And I found myself hoping that the film would suddenly turn into some Clive Barker-esque nightmare as the family, now revealed to be grotesque monsters, all tried to kill each other in steampunk ways for a trove of hidden treasure. But alas, there were just hugs and some tearful confessions and then the lights came up and I was out of candy. 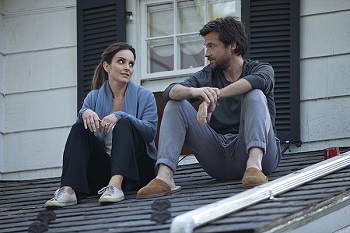 This Is Where We Jump.

The huge cast was an ambitious and failed move. Storylines are briefly mentioned and then dropped entirely. Characters move without motive and actions are never explained, developed or have consequences. You never get the sense that they're sitting shiva because they are in mourning; they're sitting shiva because that's what page 10 in the screenplay called for. The action is episodic, the emotions forced, the dialogue stale. The movie, as a whole, commits the most grievous of cinematic sins - it is boring. Everything about the film is tired and generic, from the plot itself to the "confessions" to the patented Jason-Bateman-Talking-Over-Other-People shtick.

Throughout the first half of the film, there's a repeated image of Wendy's son Cole (Cade Lappin) taking his potty wherever he pleases and doing his business - in the living room, on the back porch, on the front steps watching the sunrise - and I'm sure it looked very deep and metaphorical on paper, but what was the point? Should we shit wherever we feel like it? Take time to enjoy the simple things in life, like going to the bathroom? It was such a deliberate image that I knew it had to mean something, but I guess my idiot millennial brain, clogged up with helicopter parents and Tamagotchis and standardized testing, just couldn't comprehend the depth of our generational angst, man.

Look, I get it. Our parents die and our lives go to shit and we struggle and we come out as all right as we're going to come out. That's fine. But that doesn't mean there's a story in there. Oh wow, you have unresolved angst about an old love? So does everybody. This doesn't make your story relatable, it makes it dull. Watching people bicker and sit on the roof and then hug does not make for an interesting film-going experience.

Gen-X, I'm sorry that you all have weird relationships with your parents and that you're getting older and divorced and that children are hard. I'm really sorry to hear that, and if you need me to send a card, I'll get everyone here at the Current Releases office to sign it. But for the love of all that is good, please stop making films about it.

It also sounds like a remake of the 2010 remake of Death at a Funeral, but that was already made in 2007, so maybe this is fresh because they don't have British accents? -Sean "Keanu Grieves" Hanson

It also sounds like Wish I Was Here if some studio executive secretly donated $20 million to Zach Braff's Kickstarter, and then won the prize of kicking Braff to the curb. -Joseph "Jay Dub" Wade