A Walk Among the Tombstones

EXPECTATIONS: After Taken and The Grey, I would watch Liam Neeson take a dump. Oh wait, I did: Taken 2.

REALITY: I know the oddities of censorship are old hat by now, but A Walk Among the Tombstones ably demonstrates how easy it is for the British Board of Film Classification to miss the point of a scene completely. Take, for instance, a scene in which a kidnapper waves a garrote in front of his hysterical victim's face and forces her to choose which breast he's going to sever. You would think the BBFC would object to this scene entirely - even as an avid horror watcher with a pretty high tolerance for such content, it's an incredibly disturbing moment that feels completely out of place in a mainstream Liam Neeson thriller - but, nope, all the BBFC asked is that they mute the word "cunt," even though a later use of the word goes unmuted because it's not spoken in the context of sexual violence, even if the kidnapper uses it to refer to an endangered 11-year-old girl. Weird and hypocritical, yeah? I'm opposed to censorship, but if you're gonna do it, be consistent. 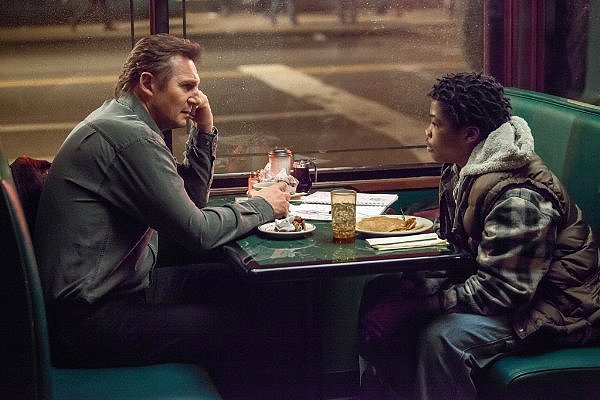 I bring this up because it's the most interesting aspect of A Walk Among the Tombstones, which is sort of like a fast-forward, incredibly grim riff on Jack Reacher, filtered through a Vicodin haze. Whereas writer/director Christopher McQuarrie was able to liven up a rote mystery novel with sharp dialogue, unexpected humor, and an energetic Tom Cruise, A Walk Among the Tombstones demonstrates the complete failure of the equally talented writer/director Scott Frank to do the same with a lifeless, humorless, here-for-the-paycheck Liam Neeson, who isn't even given his token moments of raw badassery.

Here, he's the recovering-alcoholic ex-cop Matt Scudder, who's scraping by as an unlicensed private investigator. An AA buddy asks him to look into the kidnapping of his brother's wife because his brother's a drug lord who can't exactly call the cops. The trouble is, his wife's already dead, even though he paid the ransom, and he only wants Matt to identify the kidnappers so he can exact some street justice.

It's a reasonably interesting premise that yields a sluggish, patchwork movie, probably because the novel isn't that great to begin with and Frank makes a lot of weird wrong turns. For one, the casting's all wrong. The dialogue was clearly not written for Neeson's Irish patterns, and hearing him fake a New York accent while saying "motherfucker" is jarring as hell. Other characters mumble their way through dialogue that should come with subtitles. The drug lord is strangely calm for someone whose wife was just murdered and sent to him in pieces. I'm not sure if it's possible, given the clues, to arrive at conclusions about the case simultaneously with Matt - part of the pleasure of watching a really good detective film - but being unable to understand a good 20% of the dialogue doesn't help matters. 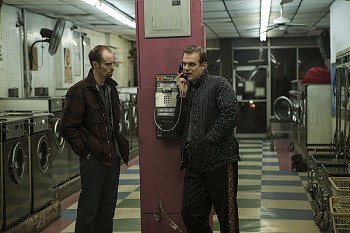 "Is you refrigerator running? Is it ready for Y2K?"Furthermore, A Walk Among the Tombstones is set in 1999 and plays out exactly like how old white men might probably remember New York City circa 1999, complete with oh-so-clever references to Y2K and a black kid sidekick who has to explain his slang to Matt. At one point, Matt asks, "Can you please speak English?" Because apparently black street patois is so very foreign to a supposedly street-wise cop. Other attempts at humor are equally forced and/or lame. And the climax is edited in a series of freeze frames. The tactic worked in Out of Sight, which Frank adapted from a much more lively Elmore Leonard novel, but here, spread out over 20 minutes and matched to a disembodied voice reading AA's twelve steps aloud, it's a fairly obnoxious stylistic failure.

But getting back to the censorship, what really undoes A Walk Among the Tombstones is its faux-gritty veneer of casual sadism and misogyny. The garroting of breasts is a bona fide motif, even if it happens off-screen. No one seems particularly bothered by their murders. There are no significant female characters, unless you're counting victims. (Apparently, Matt initially had a female sidekick, but Frank edited her out of the movie entirely.) In the opening flashback, in which a drunk Matt chases down three armed robbers while on duty, he looks... almost gleeful as he shoots one in the back. But he's not presented as the kind of roguish antihero Mel Gibson might have essayed on the wane. Rather, he is our moral compass in a city built on pain, booze, drugs, dead children, and disembodied women, and his own compass is spinning in circles.

Normally, I'd be fine with such a proposition - I love the shadowy world of noir, where the good guys are only a little less bad than the opposition - but A Walk Among the Tombstones seems to believe in the possibility of a better world even as it's wallowing in New York Shitty cliches. We're not even given motives for the villains. Are they in it for the money or the rape-y kicks? This isn't a movie so much as a put-on, an excursion, a simulacrum, a misfire, a feature-length adaptation of Se7en outtakes, proof that Hollywood caterers occasionally spike the minestrone with crushed-up Xanax, and a bunch of adjectives like "weird," "sedate," and "turgid." I'm not sure how I can describe its painful mediocrity, except to tell you this: Neeson only kicks one ass, and it's in the last ten minutes. I would rather see Taken 35 than endure this piece of shit again. At least I finally got to see a trailer for Dracula Untold.

MINORITY REPORT: This means that not only did someone watch Taken and say, "Needs more objectification and victimization of women," but that enough someones reacted that way to make a movie. - Jordan "CloseFriend" Saïd