The Mechanic; The Rite

EXPECTATIONS: Just by virtue of its January release date, I'm fully expecting The Rite to be terrible. Then again, Anthony Hopkins is in it, so hopefully there will at least be some good performances. Then again, name me one exorcism movie not called The Exorcist or The Last Exorcism that was worth a damn? Then again, I'm kind of a sucker for these religious thrillers, so maybe I'll still find it entertaining.

...Then again, there's probably a reason why I'm the only person in this theater on a Friday evening.

REALITY: To paraphrase Kevin Spacey, the greatest trick The Rite ever pulled was convincing me that anything happened. It's not a movie with any fancy action sequences or labyrinthine, Nolanesque plot twists, but for a story with so much potential internal conflict, remarkably little actually occurs. If you threw holy water at me and forced me to succinctly criticize this movie or else you'd bless me to death, I'd have to say The Rite is just plain boring.

All his life, Michael Kovak (Colin O'Donoghue) has been running from the afterlife. After his mother died, he begrudgingly joined his father (Rutger Hauer) in the mortician business. After graduation, Michael fled to the seminary. Days before entering the priesthood, Michael's crisis of faith leads him to drop out. Before he can do that, he's urged to go to Rome and take a class on exorcisms at the Vatican. Upon his arrival, Michael is sent to Father Lucas (Anthony Hopkins), whose methods of exorcism are questionable at best. After a botched exorcism, Father Lucas goes crazy (or evil, who knows?), and it's up to Michael and a visiting journalist (Alice Braga) to save him.

After the credits rolled on The Rite, it occurred to me that the overriding theme of the movie is "weakness." The main character has weak convictions, which is why he winds up taking an exorcism class; the weak of heart are the ones who seem to find themselves possessed by demons; the weak of body and spirit are the ones who succumb to the demons, etc. And this theme extends to the film itself. O'Donoghue is an incredibly weak lead for a film like this. He has about as much natural charisma as an Old Navy mannequin. Anthony Hopkins acts so many circles around him that it's like watching Superman turn back time. (See? Weakness is even invading my comparative similes!) 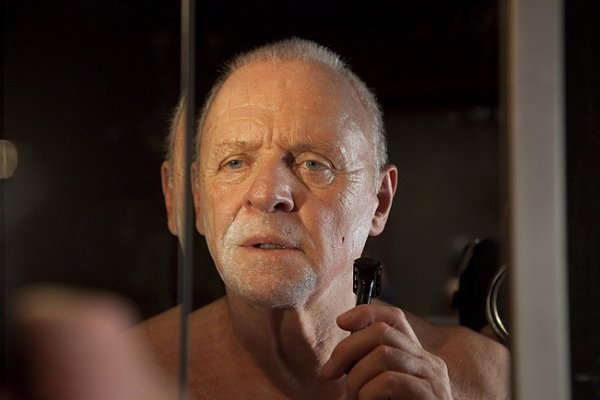 Good old Tony "Half Beard" Hopkins, as he is known to his mates.

It extends to the title, as well. The Rite. What a weak fucking title that is. What does it even mean? Usually, when you hear about the clergy reading rites, it's in the plural. Nobody ever reads just one rite. And which rite is it? It's certainly not the last rites; this movie is about exorcism, not death. Could it be referring to Stravinsky's "Rite of Spring"? No, probably not. It's probably referring to Kovak's rite of passage into the clergy, but that's tenuous at best. The truth is that the title has fuck-all to do with exorcisms. It's just one of those vague titles that's supposed to make you think of religion in general and get you in the mood for the movie. It's like how Event Horizon isn't really about black holes, but it gets you thinking about scary space shit anyway.

Supposedly, this movie was inspired by true events. The script was also "suggested" by a book by Matt Baglio. These, of course, are simply buzzwords to convince us that A) shit like this actually happens, and that B) it deserves its own movie. It's obvious that all they really did was take the basics of the book (a priest goes to Rome to learn about exorcisms), turn Baglio's character into a girl to sex up the story and then add a few spooky dream sequences.

The problem with exorcism movies is that they automatically assume everyone watching is on board with Christianity and exorcisms and all that business. These movies practically demand that you buy into God, the devil and everything in between. Not to say that you can't be emotionally invested or thrilled by an exorcism movie regardless of your spiritual beliefs, but if you're athiest, agnostic or (God forbid) of another religion, it changes your perspective on the whole exorcism thing. That's what makes The Last Exorcism so entertaining: it's already about someone who's skeptical about things, and it takes every opportunity to expose exorcism as a racket (until the last five minutes or so). The Rite, on the other hand, hints at the notion that people doubt religion and can find simple explanations for these weird phenomena, but then quickly retreats back to "Yeah, he's possessed, really!" It's too scared to take a chance on something as sacrilegious as "Maybe he's faking it?"

The only reason Kovak believes in God is because exorcisms are fucking scary. If that's the criteria for that sort of thing, then couldn't he have just as easily watched The Exorcist? Religion is a slippery slope; even slipperier when you have to rely on special effects and Anthony Hopkins.

MINORITY REPORT: Didn't you already review this film? Or am I thinking of something incredibly similar? Either way, this film sounds like it would have been better if it really did star Nicolas Cage. Then he could have made an unholy trilogy of demon-fighting movies, rounded off by next month's Drive Angry. - Ian "ProfessorClumsy" Maddison