REALITY: These days it seems like for every action movie with a decent cast and an interesting premise, there are ten others starring A-list Actor X about science finding new ways to punch henchmen in the throat. Hanna looks like it's taken a little from column A and a little from column B. Casting Saoirse Ronan as the lead in an action movie has the potential to be at least intriguing, but the premise seems to rely too heavily on the favorite hypothetical of geeks like Joss Whedon: "What if a teenage girl were trained to murder people?"

EXPECTATIONS: The answer, oddly enough, is "She would murder people." Hanna is an action film with the kind of singular focus that most Hollywood action films tend to ignore these days. That's not to say that it plays only one note for 110 minutes, but rather it plays that note well, with enough timed pauses to break the monotony. 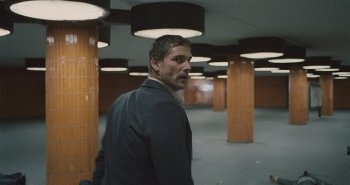 Oh shit! That guy just off screen to the right has a sword. Better run!As the film opens, we meet Hanna (Saoirse Ronan), a teenage girl being trained to hunt in the wilderness by her father (Eric Bana) for some unknown purpose. He trains her to fight, to hunt, and to kill. He also teaches her about the world by reading her encyclopedias as bedtime stories. After triggering a signal to the CIA, Hanna's father leaves her in the forest to make her way to Berlin. Along the way she's hunted by an agent with unfinished business (Cate Blanchett) and an effeminate hitman who loves whistling (Tom Hollander). On her trek to Berlin, Hanna also encounters a family of American tourists who teach her the value of friendship and basically everything that one can't learn from 16 years of hunting caribou.

Whereas films like Salt or the Bourne trilogy like to take the concept of a blank-slate assassin and run it into the ground with a bunch of poorly shot fistfights, Hanna takes a more subtle approach. Sure, there are fistfights and chase scenes aplenty, and the editing and music are at times machine-like in their rhythm, but when the film slows down to let the characters develop, it reveals a richness that most other action films never quite achieve.

At times Hanna plays like a disturbed version of a fairy tale. Watching Hanna enter the real world and experience things like music, dancing, and friendship often seems reminiscent of Pinocchio, while Cate Blanchett's pursuit turns her into something akin to the Big Bad Wolf. Though Hanna was built for a specific purpose, seeing her grow into a fully-formed human being with personality and emotion becomes the driving thread of the film. Actually, if I had to compare this to any other film, it'd be the Jet Li film Unleashed. In both of these, trained killers are set loose, only to become domesticated and humanized by their encounters with regular people. Hanna pulls it off a bit better, but only slightly. 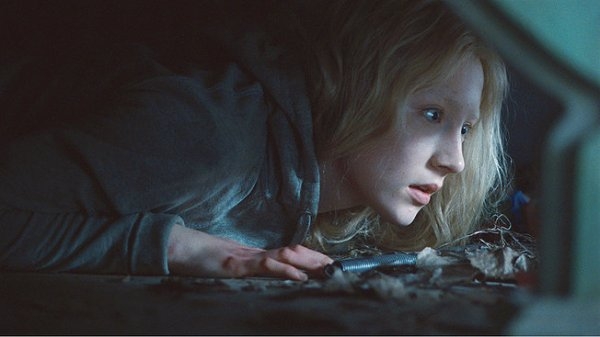 I must hide, for there is something terrifying just... off screen... to the right!

In the title role, Saoirse Ronan is pretty fantastic. Her slow progression from a mechanical, trained killer to something resembling a normal teenager is well-executed, and at times quite hilarious. She shares a number of scenes with a British teenager who's utterly obsessed with celebrity gossip and fashion, and watching Hanna react in quiet bewilderment really displays the kind of restraint at Ronan's command (or it could just be my desire to strangle that character). Elsewhere in the film, Eric Bana and Cate Blanchett perform well, but neither really stands out. Blanchett in particular is handicapped by an incredibly off-putting American accent. I know she won an Oscar for playing Katherine Hepburn, but that doesn't mean she has to put that accent to use in films like this. All she has to do is run around and shoot at people. She could have dropped the accent entirely and the film would be no worse for it.

The film's music is another bright spot. Where Trent Reznor used electronics to add ambiance to The Social Network and Daft Punk tried to channel Vangelis' electro-weirdness for their Tron: Legacy score, The Chemical Brothers manage to find the happy balance between the two for their score in this film. Hanna's theme is fittingly childlike and vaguely reminiscent of "Heigh-Ho," while stronger beats accompany the many chases and fight sequences.

Why don't more action films do this? It seems like a no-brainer, especially these days when so many fight scenes are rigorously choreographed to look like obnoxious dance numbers anyway. I'm not asking for the Captain America movie to feature a song and dance number between Cap and Red Skull, but it'd be nice if the fight music accentuated the battle rather than mucking it up with string swells and lame motifs.

I don't want to invoke the name of Current Releases' favorite movie too soon, but considering what we've seen so far in 2011 and what lies ahead, I'm tempted to call Hanna the front-runner to be this year's The A-Team. It's a somewhat ridiculous action flick with enough well-directed setpieces and quirky character moments to keep things interesting, but I'm pretty certain this one's going to get lost in the shuffle once the summer movie season gets underway. My hope is that this'll be a sleeper hit, at least until Thor drops the hammer on its theatrical run for good.

MINORITY REPORT: This reminds me very much of my own teenage years. My memories of the training regime have become blurry, but some images and sensations remain vivid; cowering in my father's dingy basement, sucking the moisture from damp towels and nursing the cigarette burns on my neck. - Montague "Legally Sane" Smythe