EXPECTATIONS: You know, I've got a good feeling about this one. I was surprised by how much I liked 2008's Pineapple Express, as both a comedy and an over-the-top action movie, and this looks to be more of the same, maybe with some dragons or something thrown in. (Vargo's movie tip #73: Dragons improve everything.) David Gordon Green is an incredibly talented and versatile director. Also, this movie can boast that it stars Academy Award Nominee James Franco and Academy Award Winner Natalie Portman, as well as Your Dad's "Hey-I-Like-That-Guy" Award Winner, Danny McBride.

REALITY: Look, if you're going to make a terrible, immature movie for terrible, immature people, go ahead and do it. Just don't get so many talented people involved to stain their careers with it. Your Highness has exactly four jokes in its entire 100-minute runtime, and they are, in this order: Swearing, Dicks, Weed and Rape. The first three are probably good if you're a 12-year-old boy sneaking into your first R-rated movie. That fourth one, we'll deal with it later. 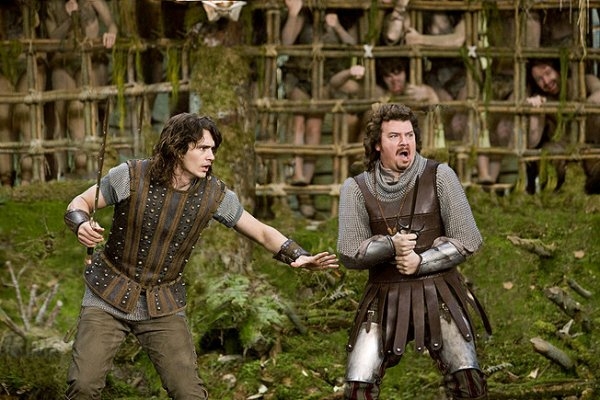 Oh my God! Those birds, just off screen to the right. They have giant eyes!

Your Highness tells the story of lazy slob Prince Thaddeus (Danny McBride), who must accompany his brother the noble Prince Fabious (James Franco) on a quest to rescue his bride-to-be Belladonna (Zooey Deschanel) from an evil wizard (Justin Theroux) or be banished from the kingdom. In Your Highness, James Franco and Danny McBride play medieval brothers who are stark opposites who have to save a maiden one of them wishes to marry. Danny McBride plays the Goofus to James Franco's Gallant in the 2011 film Your Highness, wherein they have noble adventures involving women and warlocks. Why did I just explain the plot of the movie three times? Because that's how many times the movie explains it to you. With such an intricate and detailed plot, I didn't want you guys to get lost. This is some Inception-level mindwarpery right here. 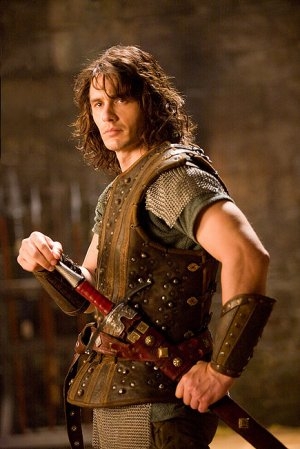 I must prepare to do battle with that hideous creature... just off screen to the left.Not only does the script fall flat, but also the cinematography is ridiculous. Instead of the fun action sequences from Pineapple Express, we get shoddily filmed scenes where it's impossible to discern what is going on. At one point I actually thought James Franco was wielding a severed head as a weapon, hitting his attackers with it. (This would have been far superior to whatever really does happen.)

In fact, there are a number of places Your Highness fails where Pineapple Express succeeded. The biggest difference -- the thing that makes one film good and the other 100 minutes of joyless, excruciating agony the likes of which may never be seen again -- is simple plot cohesion. For someone who is trying to save his beloved from a ritual sexual assault (still getting to that), Fabious sure doesn't seem to be in any sort of hurry. There's plenty of time to wander through nonsensical side-quests and plot-padders. Natalie Portman's entire role in this film is to be filler, surely a good use of that nice fresh Oscar. Hell, there's a lengthy sequence involving a man who makes a Hydra out of his hand, and that's one of the most logical points. Look, write a plot first, then add gags. Don't fill in the points between your gags with unneeded plot. Otherwise you wind up repeating yourself unnecessarily, like that movie with Danny McBride and James Franco where they played brothers who were knights.

Furthermore, I realize "man-love" and "bro-mances" are funny. I also realize they are both stupid, stupid phrases. They're funny because there's an awkward underlying layer of homoeroticism about them, and that makes people uncomfortable. However, it's funny in movies like Pineapple Express and Superbad because it's never outright stated. When one of your characters is aware of how gay their situation is, then it's not funny, it's just gay. It's just a movie about incestuous gay crusaders. (Good name for a punk band.) Guys, when you've already established that everyone in this movie talks like they're at a frat house, the "Gay used to mean happy" joke doesn't work anymore. That's called "Verisimilitude," and I am an idiot for looking for it in a movie about a knight who likes to get high.

Well, that about wraps it up for me here. Am I forgetting anything? Oh, right, the rape. Let's explain: The evil wizard wants to fulfill a prophecy that says The Chosen One will put his seed into a virgin when the stars align and blah blah blah. As a result, she will give birth to a dragon or some shit. In order to fulfill this prophesy, he kidnaps a baby and holds her hostage until she's an adult woman so he can force his way into her one night! Isn't that hilarious? In fact the final battle scene occurs with him in the middle of the room trying to rape her while everyone's fighting all around them! He's too distracted by the fighting to rape! HAA!! Oh, but don't worry, she's not like screaming or anything. They put a spell on her to make her horny, so it's not really rape 'cause she thinks she wants it! Like roofies! It's soooo good, you guys!

Look, I realize that humor has to push taboos sometimes, and comfort zones can be damned, but there's also a line of good taste. Somehow, having everyone treat this like Snidely Whiplash tying a woman to the railroad tracks seems to cross it. (Note: Apparently I'm okay with brutal murder, but not rape. Good to know.) I mean, they refer to this ritual as "The Fuckening," which is basically this entire movie in a nutshell. Hell, this would be forgivable if the rest of the movie were funny or clever in any way, but as is, it's just offensive for offensiveness' sake. Somehow, given the talent that went into this, I can't help but feel the whole movie is a late April Fool's Joke, like James Franco at the Oscars. If you want to be trolled, do yourself a favor and stay on the internet. At least you don't have to buy a ticket.

MINORITY REPORT: I once encountered an evil wizard in my worldly travels. He went by the name of Strengrarth and he could summon the dead. I don't mean he summoned souls or zombies, he just made dead bodies appear and then blamed them on me. I appealed to the police to stop him, but they couldn't see him. Seems he had cast some spell of invisibility that only my trained eye could see through. I'll get you yet, Strengrarth. I'll get you yet! - Montague "Legally Sane" Smythe