EXPECTATIONS: Peter Weir is one of those directors that we can probably all agree has reached "auteur" status by now. Master and Commander was rich, sprawling, realistic and fascinating, and everybody loves The Truman Show, so hopefully The Way Back will be another string to add to Weir's impressive bow.

REALITY: Have you ever had that feeling that you should have liked something much more than you actually did? The Way Back is certainly a very interesting study into the primal male instinct to herd together and survive, and it's also an incredible piece of visual storytelling, but something about it just didn't quite gel with me. It's not so much disappointment as it is a kind of bafflement in seeing something that is clearly a very good film, but feeling no joy in having seen it. Let's see if I can get to the bottom of this.

The film follows Janusz (Jim Sturgess), an innocent man jailed in the infamous Gulag prison for his anti-Communist beliefs. Those dirty Commie bastards tortured his wife and forced her to inform against him, you see, so he is determined to escape and make the long trip home so he can let her know he forgives her. Hokey, perhaps, but it gets things moving. Shortly after his imprisonment, Janusz meets Khabarov (Mark Strong, for once not playing a bad guy), who has a plan to get them both the hell out of there. After collecting a team of willing escapees that includes the enigmatic American Mr. Smith (Ed Harris), the violent-yet-loyal Valka (Colin Farrell), the humourous Zoran (Dragos Bucur) and the creative Tomasz (Alexandru Potocean), Janusz breaks free and begins his interminable trek.

On the way, our gang of walkers pick up young Ilena (Saoirse Ronan), who becomes a kind of caring daughter figure to the aging Mr. Smith and introduces an interesting dynamic to the group. In spite of what you might expect, the herd of men take a protective stance regarding the young girl and some of their savage brutality is softened. In an earlier scene they are very literally compared to a pack of wolves in a rather blunt, but effective, visual metaphor. The arrival of Ilena restores a shade of humanity that was almost lost to them. They make shoes and sunhats for her out of available materials, and they even carry her when the need arises. As the group inevitably thins out, this protective need only strengthens. This is easily the most interesting theme of the film, and it is captured brilliantly with Weir's wonderful aesthetic sensibilities.

Contrary to what most filmmakers would do, Weir gleefully plays big moments small and small moments big. Momentous instances like crossing the border into Mongolia - essentially the first milestone the group passes - are handled in a refreshing way. Ordinarily, this scene would be played with fanfares and tears, but here the ensemble merely walks past a post. Similarly, the group happens upon the Great Wall of China in the night and doesn't notice until the next morning, marking the occasion with a "Hey, look at that." The best moment is probably the most subtle: Some time after a character has parted ways with the group, it suddenly dawns on Janusz how important he was. It's a silent moment and not much attention is drawn to it, but it's very effective and it elevates the presence of the character in question long after his departure. This subtle visual storytelling is remarkable to see in an age of cinema wherein the normal approach is to treat one's audience as if they are illiterate babies. Weir actually has faith in his audience to understand a visual cue to continue the story without someone yelling "We are in China now!" 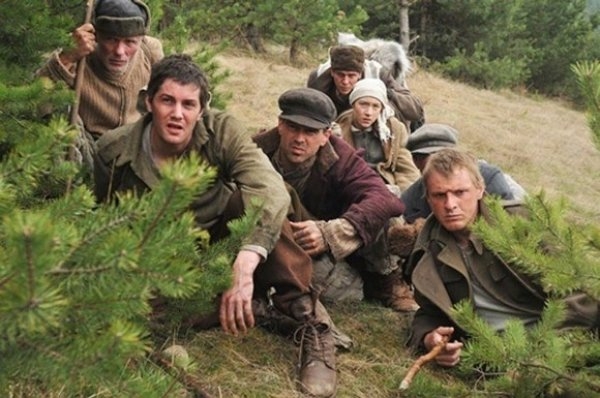 Here's a fun game you can play at home: circle the faces of the characters you think are going to die and then watch the film to see if you were right.

What detracts from Weir's directorial skill, though, is a lumbering, slightly impersonal and occasionally repetitive script. We are continually told that Tomasz is a great artist and a great chef and we are told Zoran is a funny guy far more often than Zoran actually does anything funny. On top of this, there are too many scenes that start with "Now would be a good time for me to tell you all my heartbreaking backstory," which gets exhausting fast; one character even tells two completely different ones, for reasons that are equally as heartbreaking. When politics are added to the mix, particularly the ideals of Valka, the concepts aren't really drawn out to any logical conclusions. Politics and history are essentially side notes in this film, present only to serve the central theme of the basic core of humanity.

Most of the first act played out in a way that was slightly confusing to me, with characters being thrown at the screen with break-neck speed, many featuring different gradients of accents and names I couldn't quite catch. It is not until quite a ways into the film that we really learn who all of the main characters are and how the dynamic works. A good example of this is that early on, Janusz is talking to Khabarov about the escape and insists that his friends come along, but at this point we have no idea who his friends are. Also, we assume Khabarov will go on to be a very important and interesting character, mostly because he is played by Mark Strong, but he promptly vanishes when the escape happens. The whole sequence in the prison feels a lot like an incomplete film in itself, with an arc that doesn't really resolve and characters that appear and disappear just as readily, never to be spoken of again.

We cast a peculiar critical eye over the weaker works of great filmmakers in a way we wouldn't with the strongest work of lesser filmmakers. In that vein, The Way Back is Weir at his worst, which is much better than a lot of directors could even aspire to. But that unusual critical gene in our bodies yells that this is a disappointing work from Weir, rather than seeing a sub-par script elevated to something greater by a director who really knows his onions.

MINORITY REPORT: Well, maybe it was time I told you my heartbreaking backstory. It all started when my dear old dad shot himself, my mother, the dog and the gardener (in that order) on a cold Autumn evening in Spring. Having survived the ordeal, the gardener and I left immediately for Wales, hoping that the bracing air and the fascinating slate quarry tours would put the world into some perspective. After an unexpected tumble from an open-air tour bus and a string of medical mishaps, I became the Monty Smythe you know and adore to this day. As for what happened to the gardener; his body was never found so you can't prove anything. - Montague "Legally Sane" Smythe