Country Strong, or: Micarriages are Often Harder on Gwyneth Paltrow

Warning: The following article contains spoilers that I don't feel bad about posting in the slightest, because the people who bitch about spoilers and the people who want to see Country Strong are two mutually exclusive groups.

Country Strong follows country singer Kelly Canter (Gwyneth Paltrow), whose life has fallen into darkness after she suffered a very public miscarriage. (She drunkenly trips over a microphone cord in front of a crowded stadium and falls ten feet into a pit. No, I did not make that up.) She is pulled out of rehab by her husband/manager James (Tim McGraw), after which she tries to launch a comeback tour with roughneck pretty-boy Beau Hutton (Garret Hedlund) and beauty-queen-turned-singer Chiles Stanton (Leighton Meester) in tow as her opening acts. So as you can see, the entire film is based around pretty white people making terrible decisions, like the decision to let Tim McGraw do this acting thing for-reals. Country Strong is a bad film, yes, and I'm going to tell you how bad it is, but first I have to tell you how fucking bizarre it is.

Let's start with McGraw's performance. As the husband/manger of the biggest country star in the world, James is often referred to as one-half of the biggest marriage in country music. Appropriately enough, McGraw is, in real life, one-half of the biggest marriage in country music. It's not even a stretch to say the wardrobe department went out of their way to make Paltrow look like his wife Faith Hill. I wanted to leave Country Strong able to say that McGraw turns in a good performance (he doesn't), but much like Eminem in 8 Mile, he's really playing a hyper-fictionalized version of his public persona anyway. The difference is that Country Strong takes place in some alternate universe where Faith Hill is a drunken selfish baby instead of the woman who recorded the worst Christmas theme of all time.

The film rallies heavily around the theme that Country Music is too pop-ified and commercial, and that it's become more about commercialism than writing good music. If you don't pick up on that theme immediately, don't worry. Beau flat-out says it at one point, and because he's the only character who is even remotely likable, it must be true. Throughout the film, James only tries to use people to make money, including his wife and Chiles. He has no talent of his own, but he's in charge of the decisions for those who do. He is the embodiment of everything the film says is wrong with country music today, yet in real life, he and his wife have made long and brilliant careers out of contributing to it. It's so damn meta it has to be intentional, but it's the sort of irony that is lost on the audience, the producers, and anyone whose job isn't to point out weird crap on the Internet. 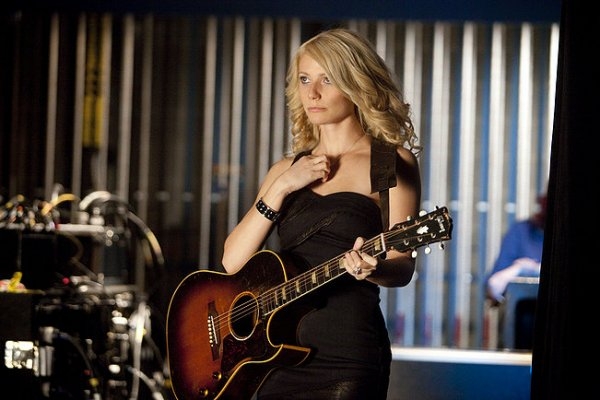 Insert obligatory joke about Gwyneth's guitar being heavier than her here.

Let's move on to the film itself, though much like its star, there's not a lot of meat on those bones. (Ha, see? Because people think Gwyneth Paltrow is too skinny! Topical!) The film's biggest weakness is that it's simply not very interesting. Sure, there's a lot going on, between emotional breakdowns and love triangles that turn into love rectangles, but at no point in time are we given any reason to care about these characters, so it all falls flat. There was a lot of potential in Country Strong. It could have been a decent character study in how a couple handles tragedy. It could have delivered scathing commentary on the music industry. It could have made people take Leighton Meester seriously, which hasn't happened since her parents decided to name her Leighton Meester. It does none of those things. Instead, it strings the audience along from crying breakdown to crying breakdown with no real plot or character development in-between.

Maybe it's due to the fast-paced nature of the film, the majority of which takes place between three concerts, but Kelly is exactly the same at the end of her character arc as she is at the beginning. There's literally no growth from any of the four protagonists, including the wide-eyed childlike one whose goal is to grow up on the road. We see absolutely nothing that makes Kelly a good character or even a good person, and so there's nothing driving us to want to see her succeed. The one attempt to combat this is during a shoehorned scene where Kelly sings to a little boy dying of Leukemia during a Make-A-Wish foundation meeting. Literally, the only decent thing Kelly does is be nice to a little kid with cancer. And they even screw that up, by turning the scene to focus on Kelly's marital problems. There is a little kid dying, and our pretty white people still have to focus on their problems.

Which brings me to another point about the bizarre nature of Country Strong, and those spoilers I mentioned earlier. Kelly, who doesn't deserve a happy ending, doesn't get one. No, we go with the ending of The Wrestler instead. That's right, Gwyneth Paltrow leaps off the top turnbuckle and dies. Of course, by "turnbuckle" I mean "lots of pills" and by "leaps" I mean "downs with alcohol." I'm not sure how to feel about this. I want to give the film points for the sheer ballsiness of it, but then again, the film makes Kelly out to be a martyr, who removes herself so that others like Beau and Chiles can lead happy lives. In all honesty, though, it's just more selfishness and melodrama. Bear in mind this happens almost immediately following the kid with cancer. That's right, the script has just told us that Kelly Canter looked at a bald-headed little boy who will probably die within the year, and she still thinks her problems are major enough that she needs to kill herself. If the movie would quit pretending that Kelly is a good person, and just let Gwyneth embrace the psychotic bitch that Kelly is, we might have had a good movie. Instead, we have no emotional connection one way or another to our main character, so this death has absolutely no impact.

But hey, let's talk about the music. For not being a traditional musical, Country Strong certainly makes sure the lyrics to every song pertain to exactly what is happening on screen right that very second. It's like one of those late-'90s Disney movies where they decided that it was somehow cooler to have Phil Collins sing the narration in the background than to have the characters sing it themselves. However, this time the characters ARE the narrators. Here's how 90% of this goes: Beau or Chiles get onstage, they sing a verse, then we cut back to Kelly and see how she relates to the verse they just sang, then go back to Beau/Chiles for the end of the song. Also, apparently in movies, the opening act at a concert always plays one song and then leaves. Our supporting roles may have a subplot of their own, but for the most part they are relegated to the role of Greek chorus. But hey, it's very good chorus work! The music is indeed excellent, particularly the songs sung by Hedlund. As a country music fan, I heartily endorse Country Strong ... The CD, that is. The movie is just crap.

MINORITY REPORT: Country music is a useful tool for drowning out the cacophonous din of the many, many voices in my head. - Montague "Legally Sane" Smythe