The Social Network; Buried; Let Me In

EXPECTATIONS: I have never seen the 2008 Swedish film Let the Right One In, the movie upon which Let Me In is based. I briefly considered watching it prior to this screening, but then realized I'd be doing myself a great disservice. By simply being aware that this is a remake, I'm already miles ahead of 90 percent of the rest of the people in my theater, why spoil the experience further? I'm content to just sit back and let good old American short-attention spans try to process a somber vampire movie in a post-Twilight world.

REALITY: This is the new favorite movie of people I hate. Pretentious art students, sensitive goth poets, fat chicks who wear too much eyeliner with names like Ashton and Journey, gather 'round, have we got a tale to regale ye with. Finally you have someone as bland and unlikeable as you to relate to on the big screen!

Let Me In tells the story of a strange boy named Owen (Kodi Smit-McPhee) who lives in a small snowy town in New Mexico during what is apparently the 1980s. Owen's hobbies include watching his neighbors have sex through a telescope, sitting alone on a jungle gym, and getting beat up by a school bully who looks like Cameron from Ferris Bueller's Day Off (Dylan Minnette). Maybe we're supposed to feel sorry for Owen, but I just couldn't. The bullies attack him and call him a weird creepy kid because he really is a weird creepy kid. Forty minutes in, I wanted to jump into the movie and stick his head in the toilet myself.

This movie tries really hard to convince me that's because of the potential for evil that lurks inside of people, but I'm still pretty sure it's because Owen is just terrible. Things start to look up, or at least sideways, for Owen when some weird neighbors move into his building, a girl named Abby (Chloe Grace Moretz) and the strange old guy she lives with who doesn't get a name because adults aren't important in this movie (Richard Jenkins). Abby meets Owen outside a few times at night, looking sickly and being barefoot in the snow, despite apparently owning boots a scene later. The nighttime and sickliness are explained by her being a weakened vampire; the unnecessary barefootedness is due to her being deep and tormented like your soul, Ashton. They form a friendship that is hindered by Abby's occasional need to brutally murder people and consume their insides. Fun times are had by all.

A visit to Chole Moretz's IMDB profile message boards reveals she has become the newest target of the incredibly creepy "ironic" pedophiles that make up the Internet. In an effort to be edgy and intense, director Matt Reeves has put on the PedoBear suit and declared himself king of this group and made a movie that screams "CHILDHOOD SEXUALITY" so hard members of NAMBLA had to leave the theater. Reeves attempts to explore the darker side of being a preteen and the sexual discovery therein. It is hinted at that Owen might be gay (Abby asks if he'd like her if she wasn't a girl, wink, wink), and there are overt sexual overtones in the scenes between his torturers and him. There's even a scene where the head bully Kenny whips Owen in the boy's bathroom while calling him "the little girl he is" and ordering him never to tell. If that's not bad enough, Reeves takes the bully tradition of giving someone a wedgie and turns it into what appears to be a shot-by-shot replica of the rape scene from The Kite Runner.

Adults are largely out of the picture, both figuratively and literally, in that Owen's mom is on screen, but her face is never shown. Whatever adults are around, like a gym coach or a policeman, are portrayed as ignorant and bumbling. As a result, we are given a universe where kids are completely in control, and if a 12-year old girl wants to strip naked and get into bed with another kid, then they can do that, by golly. A better movie could have pulled off the idea of a kid-centric universe, because a better movie wouldn't make it seem like fanfic written about characters no one's ever heard of. Basically, before this movie hits the halfway mark, Owen and Abby have come closer to screwing than the Twilight characters do in the first three movies, and I'm not sure which disgusts me more.

But wait, sex isn't the only way you can poke a reaction out of an audience, Matt Reeves. You can also use religion! Throughout the film, religious imagery is dropped in manners both blatant (The opening scene ends with Ronald Reagan on TV discussing the evil that exists in America) and almost-cleverly subtle. (Owen is hit by his tormentors during the "Under God" part of the Pledge of Allegiance.) By all accounts, Devil had less vaguely religious mentions, and the ones it had made a hell of a lot more sense. Because the theme of "What makes good or evil?" is never fully explored in the film, despite there being an hour and a half of setup for it, all of this is in vain, and it just seems like halfway through production they took a look at the script and decided there weren't enough lines directly mentioning morality for American audiences to get. 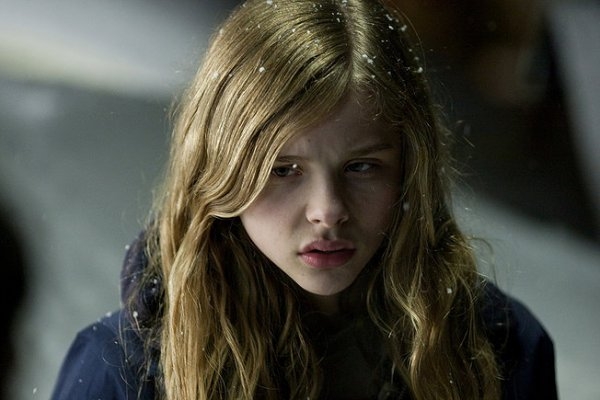 have you ever noticed how there's only ever one little girl star in Hollywood at any given time?

There are high points to the film. It is shot beautifully, and Michael Giacchino's score is incredible. The first half-hour of the film uses these two points together to create a haunting tone, which is then slightly diminished when you realize just how hard the film is trying to be haunting. A close viewer, or as we like to call them "first-year film student," will notice that Matt Reeves does a lot of interesting things using a theme of reflections, and you can see glass and mirrors as an ongoing motif, showing characters that aren't onscreen through reflections. It's fun and clever, and if the film were as good as that idea, we'd be telling a different story right now. However, like the religious themes, there's no real payoff to noticing this, and so the film student has nothing to look smug over. (It's not even addressed whether vampires have reflections in this universe.)

Reeves makes the same mistake here that he did with his breakthrough hit Cloverfield: He's so busy creating an atmosphere and showing you what he's trying to say that he forgets how to tell a damn story. As a result, the film is horribly paced and has no sense of basic rising-and-falling action. What feels like eternities go by without anything interesting happening on the screen, and Reeves' idea of creating dramatic tension consists of having a character walk down a hall to slow-playing music so overtly dramatic it almost borders on a Family Guy joke. This is especially frustrating when the audience already knows what's in the hallway and knows that he's going to find it. There is no tension if we are seeing exactly what we know is going to happen, it doesn't work that way. The film hits several dead spots, and at one point it truly feels like it's going to end with Abby basically saying to Owen, "Hey, you're covered in the blood of a dead cop. Have fun with that. Later bitches!" (This would have been better than what actually happens.)

Furthermore, the one thing in this movie that should be exciting and visceral, the actual vampire attacks, is the one thing that Reeves doesn't know how to shoot. Every one of them looks like a CGI moshpit of two, bumping into walls and falling over themselves. Each one grows progressively more ridiculous to the point where I start to wonder if this was supposed to be a deconstruction of vampire stories or a parody of them, in which case it was brilliant. When the best you can hope for is that the filmmakers' intent was to make a high-brow Vampires Suck, it's time to retire the genre for awhile.

MINORITY REPORT: This reminds me of my own childhood. I, too, would frequently find myself covered in the blood of policemen with no knowledge of how it occurred. In hindsight, I think that might be when my run of bad luck first began. -Montague "Legally Sane" Smythe