EXPECTATIONS: I am not an anime fan. There are some fundamental issues I have with anime that I have chosen to ignore by not watching any. However, some of the fine folks on the forums have been talking up Redline like it's a masterpiece of the genre and so, by special request, I find myself about to watch an anime and feeling fairly positive about it.

REALITY: Exciting, jaw-dropping, massively sexist, nonsensical and unsatisfying. Those are the words that come immediately to mind when I think of Redline. 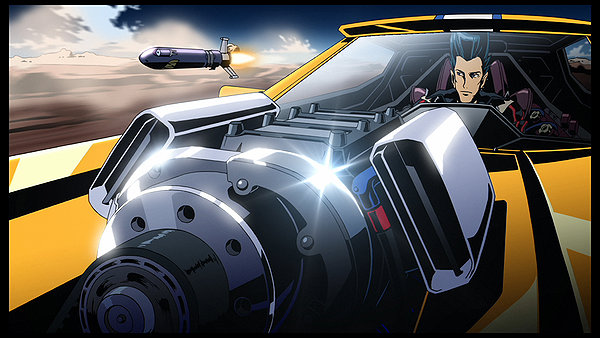 Young hotshot racer Sweet JP is in deep with the mafia, fixing races with the help of his mechanic Frisbee. After fixing it so that the girl he admires from afar, Sonoshee McLaren, can win the Yellowline race, they are both promoted onto the Redline, the ultimate championship race in the galaxy. Unfortunately, for some crazy reason, the race is being held on Roboworld, the government of which has declared that any racing will be seen as act of war to which they will respond with force, so keen are they to keep their great military secret "Funky Boy" from the eyes of the universe. Meanwhile, rivalries and secret plans amongst the racers and officers of the Roboworld army throw a spanner in the works -- and then everything just stops.

The racing scenes are frantic and impressive, with unique character and vehicle designs, smoothly animated and hurled at the audience with a head-pounding soundtrack that is hard to not get swept up in. A lot of the other imagery in the film is memorable and even brilliant at times. If you just want a bombardment of awesome shit and loud music, then you're going to love this and probably shouldn't read any further because I am about to stab at this film's disgusting subtext.

You see, this is a film about genitalia. More specifically, it is a film about penises and their inherent superiority over the penisless. If you are one of the unfortunate penisless then Redline seeks to put you in what it believes to be your place, which is probably a kitchen or a strip club. Don't get me wrong, I know that the world of motorsports is heavily male-dominated, but there are also a great deal of women in the sport who are taken seriously and should not be treated as a curiosity or a joke, as this film believes. 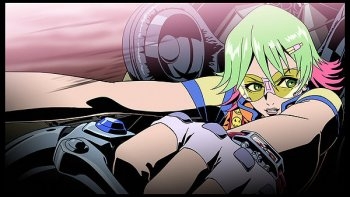 No penises.Sonoshee McLaren, in spite of being given a recognisable racing surname, is nothing more than a daydreaming girl who can't accomplish anything without her man. She wins the Yellowline race because Sweet JP fixes it for her, the revelation of which should frustrate her, but instead fills her with gratitude. Her car does not have wheels like the other ones do, because she is without penis and being without penis or wheels just isn't giving her the edge she needs to win on her own terms.

In the climactic Redline race, her hovercar doesn't even make it to the end; she only reaches the finish line by riding in Sweet JP's car. JP then gets in a dick-measuring contest with reigning champion Machine Head, who has the biggest, most powerful penis ever, but it is artificially augmented. This culminates in the pulling back of an outer skin to reveal a sleeker penis/car underneath.

Now, I know what you're going to say, "Sonoshee isn't the only female character in this whole film. You're generalising." Well, I'm glad you said that because that brings us to an even deeper problem. The other female characters in Redline are actual magical fairies who worship a super-magical princess, and these magical fairy girls like to flap their breasts around and demean themselves. Their car does have wheels, presumably because this kind of behaviour makes their presence okay, and it also transforms into a pink robot warrior with glass dome breasts from which the fairy girls take control. This is okay. This is completely acceptable imagery.

Well, at least Sonoshee takes herself seriously, even if nobody else does, right? This is a woman in a man's world story, right? Wrong. While she does take herself seriously, the hopelessness of her situation is brought home in a scene attempting intimacy. She sits, naked, watching images of her own buttocks on television, which are then interrupted by an introduction to the two characters mentioned above, who irritate the audience with their cutie-pie personalities. This really brings home the point that these characters are the penisless and should know their place.

I feel like I'm barely scratching the surface of how much I hate this film for how hateful it is. In 2011, this kind of outlook shouldn't be acceptable. Maybe the filmmakers are using this as a social experiment, to see if people will buy anything, no matter how disgusting the subtext, if it dazzles them enough. With so many people falling over themselves to praise Redline, I think they might have won.

MINORITY REPORT: I know Speed Racer tanked at the box office, but there's just something about this that I have to see in IMAX. How soon can we get Tarantino to do a live-action version? - Rascal "Film Exec" Robbins