EXPECTATIONS: The last time I met with Jennifer Aniston and Jason Bateman, things did not go so well. I got burned, I said some mean, hurtful things, it was just a big mess all around. Jennifer, Jason, I want you both to know that I hope this time things can be different. I hold you both in the highest... well, I guess not really the highest esteem, but I definitely have the utmost... no, no, I guess it's not really respect, now is it? Well, in any case, I just want to say that you are both certainly actors. And you most definitely make movies. Movies that I am forced to watch. There. Now the healing can begin.

REALITY: Am I the only one who finds it funny that Jennifer Aniston is desperately trying to re-invent herself to be "America's Cougar" while ignoring the fact that her former fake best friend stars in a show called Cougar Town? I am? Okay, just so we're clear.

I'm actually making far too big a deal out of Aniston's presence in this film, because the movie does not belong to her at all. Aniston plays one of the titular bosses who are horrible, an oversexed dentist who directs all her time into inappropriately making blatant advances on dental assistant Dale (Charlie Day), who is desperately trying to remain faithful to his fiancee. Meanwhile, Dale's best friends Nick and Kurt (Jasons Bateman and Sudeikis) must deal with working under a sadistic mastermind (Kevin Spacey) and a bigoted cokehead (Colin Farrell), respectively. To deal with their problems, the three hire a supposed hitman (Jamie Foxx), but when that fails, they decide to kill each other's bosses to avoid having any clear motive. Of the bosses, only Spacey is really given enough time to properly chew some scenery and let loose. This is a damn shame because Aniston and Farrell appear to be having so much fun with their characters, but it really seems to go to waste. That's right, Jennifer, I said it. This movie would have been better with more of you in it.

There are a lot of nice touches to this movie, but what I appreciated most was that it goes out of its way to address questions that the audience may have that are not necessarily essential to the plot, questions like "Why don't these guys just quit?" Lesser films would leave this very obvious issue hanging, but this script (written by the kid from Freaks and Geeks) is smart enough to address the issue, even if the answer is basically just "The Economy, You Guys." Compare this to last week's Transformers 3, which spends half the film making the main character ask a question ("Why doesn't the government just give me a job?") that it never answers, even though any logical person in the audience is wondering "Wait, why doesn't the government give him a job?" It's a nice detail in a strong script. 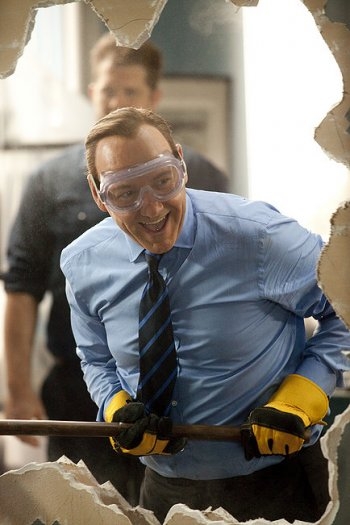 Hey! I found a review in here!While we're talking about other movies, I'd like to say here that The Hangover is a damn good film that also happens to be the worst thing to happen to American comedies in years. (Somehow even The Hangover's own sequel had this problem.) Horrible Bosses suffers from the same issue that every comedy released in the past two years has, where it wants so clearly to be The Hangover that it forgets to be Horrible Bosses. This leads to a bizarre identity crisis in the film.

Is Charlie Day supposed to be an idiot? He's clearly supposed to be this film's Galifianakis, but it's never established what his characterization is. Despite that, though, he is pretty solidly the best part of the film, bringing a much-needed manic energy to the table. This is also one of those rare cases where the film as a whole is good enough that it could stand to be a little more offensive. There are parts wherein it is very clearly trying to push the envelope and be edgy, and it can feel somewhat forced. Some gags work and are very funny (Foxx's character adopts the name Motherfucker Jones, and the trio ask him how he got it); others are obvious and fall flat (The Jasons fight over which of them would get raped the most in prison.) The movie somehow forgets what it is rated, and pulls back on the gas when it should be moving forward. It's the cinematic equivalent of whispering your swear words because you mom is in the next room.

Then there's Jason Bateman. I don't have the pure hatred for the Teen Wolf 2 star that some of my colleagues have, but I will not deny that he is a space-filler of an actor. I can't really say that he's bad, but he never does anything. He's just there, coasting off the goodwill he earned on Arrested Development. Bateman has been in an astonishing 10 films in the past 3 years, and I think it's because studio execs keep saying "I need someone to stand in front of a camera and read words that someone has written. Also, I don't want to spend a lot of money. Get me Jason Bateman!" Because of this, Bateman will never be out of work. I'm pretty sure I saw him in a community theater production of The Music Man once. As far as Jason Sudeikis goes, he... sure is a guy. He's tall. Not too tall, though. Maybe like six feet. He's supposed to be this movie's Bradley Cooper, without any of the charm and charisma of Bradley Cooper. This may be why he and Bateman work so well together. Bateman makes Sudeikis look interesting.

There's a lot to like about Horrible Bosses, but there's not really anything to love. It's not the re-hash of Office Space I was expecting, and it's not "9 to 5 with men," as Ian keeps calling it around the office. It's something altogether its own, and yet still incredibly generic. That's right, somehow this fim is original and generic at the same time. It takes a decent idea and a strong script, and it spins it into the forgettable tale of "Angry Spacey and the Not-the-Wolfpack."

MINORITY REPORT: Did someone in Hollywood do a public survey of the funniest jobs in America and decide that dentistry was the funniest? It just seems to be the standard go-to option for a job to give a character in a comedy. Do people go to the dentist and just laugh at him? Maybe it's the happy gas. -Ian "ProfessorClumsy" Maddison