EXPECTATIONS: There isn't an awful lot to say about my expectations for Larry Crowne. It's nice to see Tom Hanks headlining a film again, both as an actor and a director, and it's nice to know we have a comedy out this year that doesn't include talking animals, Jason Bateman or a "2" in the title. Perhaps most importantly, Larry Crowne rhymes with Harry Brown, which turned out to be pretty good. See? That's how logic works. 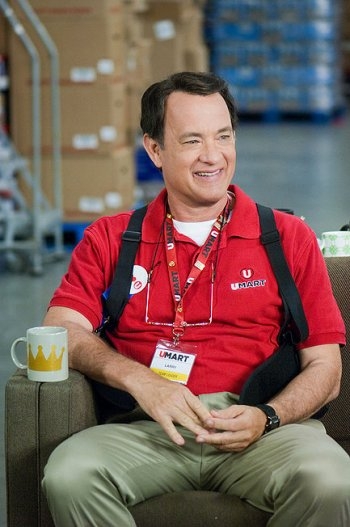 The hairdye isn't fooling anyone, Tom.REALITY: I am feeling positive. Hell, I could achieve anything! Have you ever felt like that? It usually starts with someone telling you all the life-affirming things you want to hear. Then you step out to face the world, full of joy and complacency. It's not until some time later that you realise all the things you were told are kind of meaningless, but who cares? I think this is exactly how Tom Hanks felt when he decided to make Larry Crowne and he just wanted to pass that along. I assume that, by the end of pre-production, Hanks' piss and vinegar had somewhat dried up and he felt the best thing to do was carefully calculate all the things that might replicate that feeling. It's forced and flimsy, but it makes up for it by doing something we haven't seen much of lately, which is being genuinely funny.

Middle-aged U-Mart employee Larry Crowne (Tom Hanks) one day finds himself fired without warning because of his lack of a college education. After a week or so of job-hunting he finally enrolls into some "life-changing" classes at the local college, chiefly "Speech 217" with Mercedes Tainot (Julia Roberts). Larry knuckles down and develops a romantic interest in Mrs. Tainot. With help from his young scooter-driving friends Talia (Gugu Mbatha-Raw) and Dell (Wilmer Valderrama), he learns you can change your life for the better, even in hard times.

You can see how deliberately uplifting the whole thing is, even though the message is no more complicated than "learning a few skills couldn't hurt" or "sometimes change is okay." If you want something genuinely inspirational, this isn't it. It's more along the lines of an affectionate hug after a hard day or being treated to a nice pub lunch. What I'm saying is that this will certainly cheer you up, it may even make your day, but you won't be dwelling on the ideas explored in Larry Crowne in a week's time. If you wanted that though, you'd see The Tree of Life. This is the kind of film you see to pass the time on a lazy afternoon, and in that regard, it works very well.

Remember funny films? Remember good gags and charming performances? Remember when comedy wasn't all about horrible things happening to horrible people? Tom Hanks remembers, and he remembers how to do it well. There are a lot of laughs to be found here, and none of the gags fall flat. Much of this is owed to the supporting cast that Hanks has surrounded himself with. Crowne's fellow students are all very funny, and there are some surprise appearances from some seasoned actors too; Pam Grier, Dale Dye and Bryan Cranston all show up, but the absolute standout performance comes from George Takei as economics teacher Dr. Matsutani. Takei has a perfect voice for comedy: Who else could pull off a line like "They call them smart-phones, but only dummies use them in my class" with such aplomb? 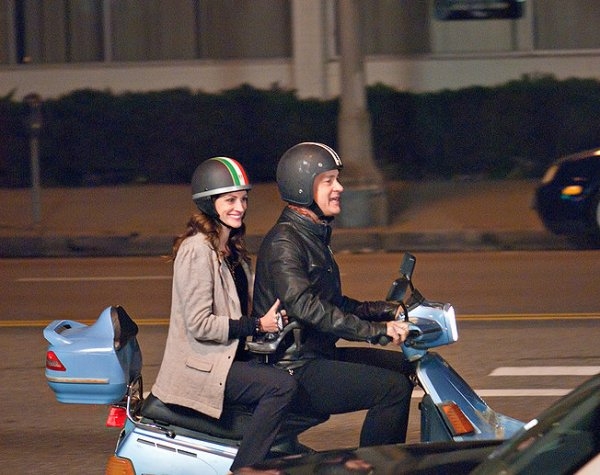 This is about as romantic as it gets.

So this is a rom-com with a lot of emphasis on the com and a rather lacklustre attempt at the rom. Hanks and Roberts are very watchable individually, but they don't really have any chemistry. That aside, they barely share any screentime in which to explore their limited chemistry. They're just kind of forced together in a handful of scenes, and we're expected to root for them to get together. Worse still is the fact that they do pretend-kissing. There's nothing that pulls you out of a supposedly romantic scene like seeing two actors press their faces together and pretend to be kissing. Are you embarrassed to kiss a girl, Tom? Are you worried your wife will be angry?

I know romantic comedies are generally looked down upon by critics as a lesser form of filmmaking. But, everything has a purpose. The purpose of romantic comedies is right there in the name. If you're only delivering on one half of what you're promising, you set people up for disappointment. That said, tipping the scales heavily in one direction can be good enough sometimes. Larry Crowne is fine and dandy if you want an antidote for The Hangover Part II. You know, something old fashioned, positive and actually funny.

MINORITY REPORT: If we cast Tom Hanks and Julia Roberts, turn it into a romantic comedy and release it against Transformers 3, nobody will ever suspect us of ripping off an NBC sitcom about a man with no degree who's fired and forced to go to community college! Somebody bring me a ten dollar bill, I need to light this cigar! - Faceless Studio Executive