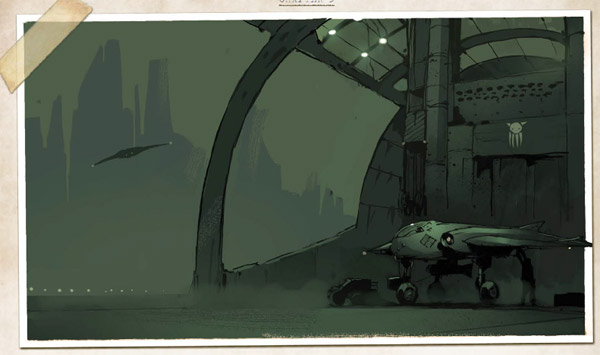 Zack: Walt and Gags step inside the main bunker. Wind howls through the open door. The lights are dim, but working. There is American radio equipment piled up just inside the door. Most of it still in crates.

Steve: "There are like 500 soldiers outside, so if you want to surrender, do it now."

Zack: After a long silence, a burst of garbled sound blares from a nearby room.

Steve: Check it out.

Zack: You enter a massive room with a radio set more complicated than you have ever seen before. It is evident that someone has tried to destroy it by shooting it with a machine gun, but the Americans here must have repaired it enough to get it working.

Steve: Can Betty use it to radio back to base and tell them to send all of their soldiers up here to kill whatever killed all the other guys?

Zack: You fiddle around with it, but it seems to be low on power or something. It seems to only be receiving and the messages sound strange. Not only are they encoded, they aren't even in a language you have heard before.

Steve: She doesn't get out much. It could be Spanish.

Zack: It's not Spanish.

Zack: While Betty is fiddling around with the radio and Walt is looking nervously around, Gags finds a sheet of paper with a small map scrawled onto it. Looks like somebody recently sketched out a plan of the facility. Probably the Americans.

Steve: Is there are "you are here" arrow?

Zack: No, but it's not too hard to figure out. You're in the room labeled radio room. There is a bunk house and galley in a separate structure and a room beneath this one labeled "hatch" with a question mark behind it.

Steve: Oh, sure. Let's check out the room labeled hatch because nothing could go wrong there.