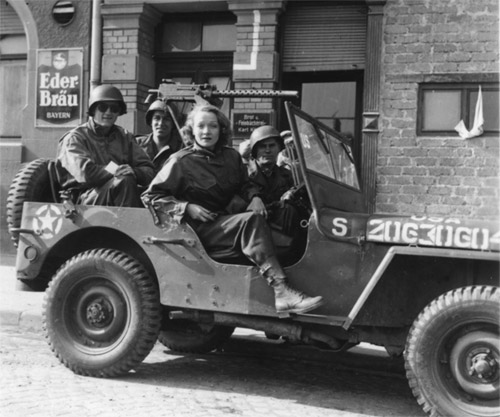 Zack: Walt starts the jeep and you load up. It is a particularly windy night. As you travel up the winding roads higher and higher you finally catch sight of a skeletal iron tower rising high into the night sky. Beneath it is an ugly bunker of concrete and several half-track vehicles belonging to the American unit you are supposed to rendezvous with.

Steve: Wave to them.

Zack: Walt pulls the jeep to a halt. There is no sign outside of the soldiers. There are several of the half-tracks so you would expect to see someone posted outside even in this cold. One of the doors on the bunker has been left unlatched and is banging open and closed each time the wind picks up.

Steve: No way am I going in there.

Zack: It's too cold to sit around outside for long.

Steve: Oh, no, I've seen The Thing. I will take the cold over being turned into a head with bug legs coming out of my neck.

Zack: In Call of Cthulhu it's not really an either/or deal. If something wants to turn you into a head on bug legs, it's going to happen.

Steve: Fine. Gags and Walt are going in first and they are going in with their guns drawn. I didn't write down guns. What guns do they have?

Zack: Gags has a Lee Enfield rifle and Walt has a Colt .45. Betty is unarmed.

Steve: She has that dead dude's dagger.

Zack: Okay, correction, she is armed with a creepy dead guy's engraved Nazi dagger. Nothing could go wrong with that. It's not like picking up a mummy dagger and trying to stab a mummy with it or anything.

Steve: Hey, if I have to fight a fricking mummy I would take a mummy dagger over just about anything.

Zack: Everything related to mummies is cursed.

Zack: You can't see me right now, but I am giving your shtick a withering stare.

Steve: You brought up the dang mummies!