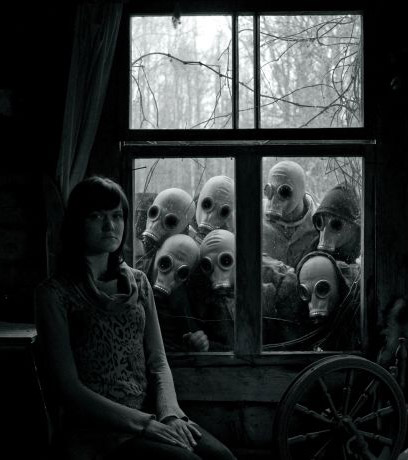 Zack: You descend an iron spiral staircase beneath the radio room and reach a long hallway with a hatch at the far end. In alcoves along the walls are odd uniforms emblazoned with the saw blade/wolf's paw/creepy eye symbol on the dagger.

Steve: What's strange about the uniforms?

Zack: They look like the sort of dark gray coverall that a mechanic or ground crew at an airport might wear, but each includes a helmet with a featureless black mask to cover the face.

Steve: Does Betty know how to drive a jeep?

Steve: Good enough. I'll have Walt, the jeep driver, put on one of the helmets and masks to see if anything happens. If he starts turning insane then Gags can shoot him.

Zack: Walt reluctantly puts it on. There are several straps that secure it around his neck and to his face. When he is finished he says that he can't see anything out of the helmet. It's completely black inside.

Steve: "Take it off, you look ridiculous."

Zack: It's harder to take it off than it was to put it on. Whoever designed it did not want removing the helmet to be easy.

Steve: I'm guessing the Nazis designed it, so big surprise that there.

Steve: Time to check out this hatch. Verrrrrry carefully.

Zack: The hatch seems to be similar to a bank vault's door with the mechanisms exposed. Although the hatch is closed, there are scorch marks around the edge of the door and the strong smell of explosives.

Steve: Well, we're already in deep enough. Have everyone search around for a way to open this thing.

Zack: There is a simple lever that seems to open the hatch, but it doesn't work. Then you notice that in the middle of the mechanisms on the hatch is a slot that looks almost exactly the size and shape to fit one of those crystals in the briefcase.

Steve: Ohhhhhh good. Alright. Sure, why not? Let's do it. Stick a crystal in there and pull the lever.