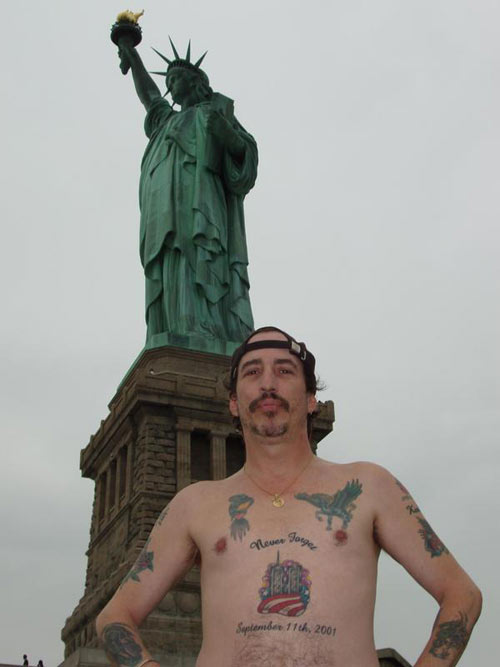 Dr. Thorpe: Never forget the day your nipple was borne away by a Pegasus.

Zack: I think putting a "never forget" tattoo on your chest is a pretty obvious declaration that you are serious about not wearing shirts very often. "Well if youse aren't ready to remember how terrorists attacked America then I'm not ready to buy a friggin' Big Gulp anyway!"

Dr. Thorpe: This photo represents liberty really well. In what other nation do we have the freedom to stand shirtless and disheveled in front of a national monument without the merest hint of shame?

Zack: This is the American equivalent of that monk burning himself in Vietnam.

Dr. Thorpe: I think the tattoo also represents the fact that this man is comfortable with extremely awkward sex. Unless he keeps his shirt on, his partner is going to be constantly reminded of all those innocent souls leaping from those flaming towers as he's drilling away at her. "Come on, Papa Bear, can't we forget, even for ten minutes?"

Zack: I don't think it would be that bad. She probably doesn't have to even look at it because after all it's insanity 24/7 in New York and that means no missionary position.

Dr. Thorpe: Even if they avoid the missionary position, I dont' think she's going to be allowed to forget. He probably yells out patriotic slogans during intercourse, or has 9/11 bedsheets or something.

Zack: Maybe, in a delicious twist of irony, his girlfriend is a terrorist and she totally gets off on seeing that tattoo and he gets off on her being a terrorist. "Go on, baby, tell me about how you gonna cut Papa Bear's head off. Tell me how you want to blow up the White House, cuz I'm gonna blow up that ass."

Dr. Thorpe: Yeah, I like the terror sex angle. "Yeah, baby, America may have brought this upon itself, but take a look at what America's about to bring upon your face."

Zack: "Ululate for me. I'm going to shoot my Ak47 all up in the air and what goes up must come down." This guys looks pretty much exactly like what I picture Otto the bus driver from the Simpsons looking like.

Dr. Thorpe: I think this guy has a certain degree of pride and dignity that Otto lacks. Otto just coasts through life, but this guy has a purpose: to stand in front of the statue of liberty and sort of vaguely, greasily menace people into admitting that America is #1.

Zack: I like how in his quote he seems really desperate for people to ask him questions. I want to just ask him a bunch of inane questions. Like just use him as my own personal Ask Jeeves. "How do I build a sawhorse?" "How many siblings did Hitler have?" "Where can I find a picture of a vagina?" I bet his answers are way more awesome and insane 24/7 than Jeeves'

Dr. Thorpe: "Jay, are natural diamonds any denser than man-made diamonds?" "Is there a simple way to draw a squirrel?" "Who invented wheelbarrows?"

Zack: "Sorry, I ain't got no picture of a vagina...but kid, you are gonna freakin' flip when I show you this picture of an asshole INSIDE a bigger asshole. It's Japanese shit or something. Traded it from Wheezy for one of my toes."

Dr. Thorpe: "Yo, natural diamonds grow on TREES here in the BRONX. This place is a nonstop madhouse and you gotta pay to play so don't show up with any of your bullshit baggage." Most of his replies probably begin with "it's like The Diceman used to say..."