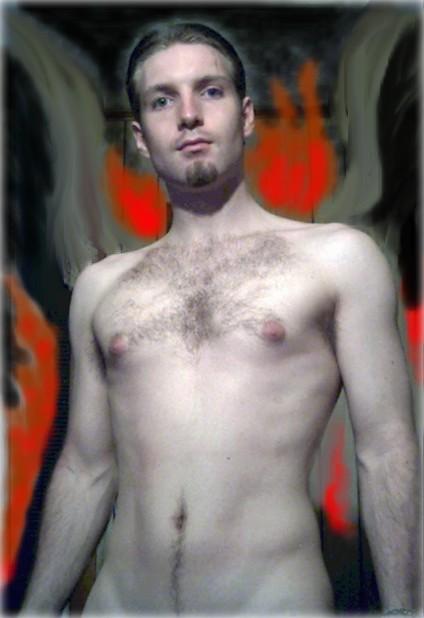 Mort
Defining Quote: "I am what happens when Oliver Twist grows up."

Zack: More like "I am what Oliver Twist sees when he wakes up."

Dr. Thorpe: This is the last thing a chicken sees before it gets fucked to death.

Zack: This is the sort of picture that needs to be reported to some sort of authorities. I'm not sure there's anything explicitly illegal in the picture, but all the same it needs to be acted upon immediately.

Dr. Thorpe: I don't think you'd have to explain why you were reporting it or anything. You'd just show it to the cops and they'd push you aside and pick up their walkie-talkies and go "we've got a situation developing."

Zack: I wonder what this guy saw in this picture that made him want to post it on his myspace site. "The way my chest hair forms an X is going to be positively intoxicating for the 14 year old girls on my friends list. Maybe if I photoshop out my Star Wars figurines with some fire shit they'll think I'm hardcore like Jango."

Dr. Thorpe: I'm not sure what the hell is going on in the background. It makes the whole thing look like a screenshot from a low-budget mid-nineties full-motion-video adventure game about getting raped and murdered by a lunatic.

Zack: Yeah I think that was the cancelled installment of the Tex Murphy series.

Dr. Thorpe: Phantasmagoria 3: This Guy Does You

Zack: There could be a part where you have to find a pixel-sized key in his chest hair before he climaxes and stabs a screwdriver through your ear.

Dr. Thorpe: Yeah, I don't think you're going to be able to hide anything much bigger than one pixel in there.

Zack: Unless it's shaped like a Rorschach test with two pepperonis dangling from it. I can just see this guy going through his image directory and saying "hmm, which of these pictures is least likely to result in me getting laid." Or worse, he said the opposite and this really was the best picture in his images directory.

Dr. Thorpe: "I wonder if I can find one that makes me look like the slow-witted younger brother of the crazy guy from Red Dragon."

Zack: "Now let me just Photoshop out any details that might tie me to the crime scene..."

Dr. Thorpe: Yeah, it's really a shame that we don't get to see the Geigeresque bone sculpture that was originally behind him in that photo.

Zack: There are some things better left unseen. Like the background of this picture and pretty much any movie produced by Michael Bay.

Dr. Thorpe: Whatever was in the background can't possibly be any worse than the pallid, bony abomination that is the foreground.

Zack: Just keep telling yourself that, Dr. Thorpe. If it helps you sleep at night.