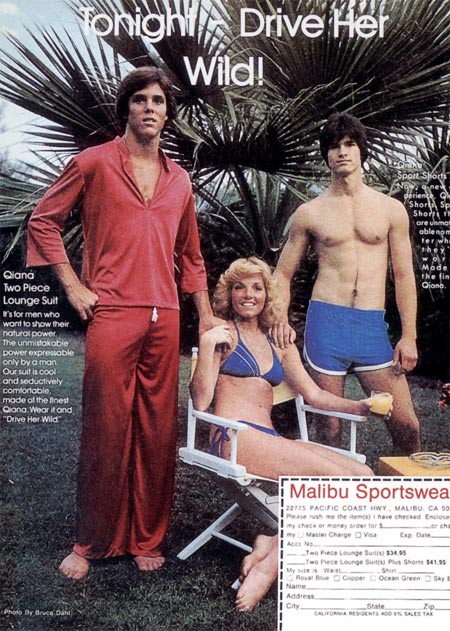 Dr. Thorpe:Oh man, look at the terrifying mongoloid in the foreground. He looks like the villain from The Karate Kid or something. "NO MERCY SIR!"

Zack:I can't even tell if he has pant legs.

Dr. Thorpe:The red-pajamas-by-the-pool look is fucking audacious though, I gotta hand it to him. It's hard to swim in culottes.

Zack:I think they're about to fight over that tendony woman-thing.

Dr. Thorpe:Nah, look at her. She's not going to choose. I don't think the guy in red is even in the foreground. He's just a hulking giant.

Zack:Is it just me or does that woman look awfully old to be hanging out with boys that age?

Dr. Thorpe:That's just one of the levels on which this picture is creepy.

Zack:It really gets creepy when you read the side bar text and realize that they're all posed corpses.

Dr. Thorpe:The other level is imagining the three of them doing what they're about five minutes from doing in this photo. "Tonight - Drive Her Wild!" Presumably that's a command to both of those guys.

Dr. Thorpe:Yeah, look at how tanned her face is. That's a face of a woman who's been trying in vain to understand the majesty of the sun but getting no further than hour-long staring contests with it.

Zack:Her field of vision consists of peripheral images and a giant glowing after-image of the sun.

Dr. Thorpe:Which is why she's smiling even as she's about to be double-teamed by a giant mental defective and a musclebound homunculus.

Zack:I like how the color is so depressing in the picture. It takes real talent as a photographer to make Malibu look like a smog day in Essex.

Dr. Thorpe:It also takes a really great photographer to get that perfect shot where the guy in red is clearly going "so when are you going to take the picture?"