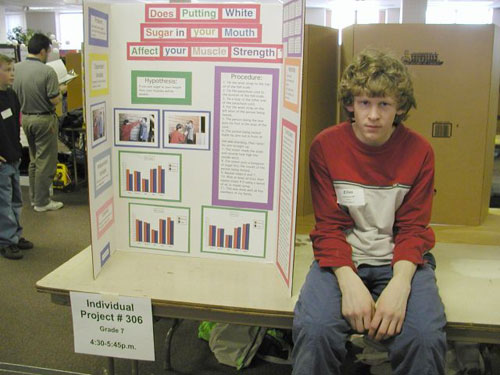 Zack:I love the science fair projects where they just looked around a room to come up with a topic. "Will putting my hand in water cause me to see in the dark?" "Will chewing gum increase my height?"

Dr. Thorpe:And I love those goofy-ass kids with lisps and bad hair who get beat up too much and get all weirdly obsessed with being strong, so they're always talking about lifting weights and learning exotic martial arts and stuff. "Hey, let me show you this schweet hold I learned in my Bo Long Poo classh."

Dr. Thorpe:And you see them in the school's weight room doing endless reps on the weight machines without actually putting the pin under any of the weight blocks.

Zack:There's always some Jewish kid learning Krav Maga too, like being able to kick a bomb off a Palestinian's chest is going to keep them from getting a swirlie.

Zack:I'm sure a handful of them end up taking steroids and become habitual wife-beaters with black and blue kids that think their father is a dragon.

Dr. Thorpe:No, they can take all the steroids they want, they can fill their mouths to the brim with white sugar, they'll never gain even a single pound of muscle mass. They just get squirrelier and twitchier and you meet them years later when you're sitting at Jiffy Lube and they're changing your oil and you roll up your window and just sit there in a state of panic hoping they don't recognize you and try to arm wrestle.

Zack:I think you're right, but I think you're discounting a whole underclass of lisping nerds who head to the Air Force trying to be a fighter pilot and end up flying a broom around a supply closet somewhere in Alaska or join the Marines to become a man's man and flunk out of training so badly that they have to do push-ups from dusk until dawn every night while some drill instructor calls them a faggot over and over until they shoot him in the face during training and then off themselves.

Dr. Thorpe:Yeah, they're obsessed with guns, they've been in the ROTC since 3rd grade, they talk about Vietnam like they have 40 confirmed sniper kills under their belt, and then they join the Army as a low-level officer and sit at a desk in North Carolina ordering pens until they get dishonorably discharged for trying to arm-wrestle the female recruits one too many times.

Zack:They become a doormat for a woman with gigantic hips who thinks ordering stuff off of QVC is a job and she recreates their abusive adolescence with masochistic bedroom games that would curdle milk. What I'm saying is, these are the exact dudes who grow up and download videos off the Internet of women stepping on testicles or slamming dicks in doors.

Dr. Thorpe:The absolute best-case-scenario for these dudes is going the Tommy Saxondale route and finding some trampy girl who'll let him do whatever he wants in the bedroom, and then he starts bragging about his disgusting sexual conquests just like he bragged about his imaginary martial arts fantasy victories in high school.