"Can you start it?" I ask Pike, standing and admiring the machine.

"No problem," says Pike, climbing up to the cab and cranking open the hood. He leans in and examines the machinery. "Has an engine cutoff to keep us from nicking it. Same as most sedans. Used to creep over to West End, wire up something posh and go joyriding with my mates. This'll be nothing."

He uses a wrench from the tractor's tool kit and knocks loose a black pass-through box. He tosses it aside and patches the cables, twists wires in the cab, and the beast rumbles to life, its vertical exhaust puffing black smoke. Diesel fumes have never smelled so sweet.

The strafing runs by the helicopters have stopped. I don't hear Childs on the radio anymore, so maybe we lucked out and he was perforated.

Spinoza could have. And Three C used to talk about driving tractors on a farm in Kentucky for a couple years. They're not here. But we have Ramone Vargas. The kid claims he worked construction for Pemex in the Coahuila Shaletown just south of the border. Sounds to me like he was dropping fracking lines into the desert, not hauling ass in a twenty-ton earth mover, but he claims he can drive the thing.

Tied to the cab with extension cords, crouching on a wheel guard and holding on for my fucking life, I sure hope he wasn't lying. The Cat tears down the chain link and bounces as it clears the curb. Surprisingly, it has a nav system, and Vargas has programmed it to follow side streets, only crossing the main streets when necessary. Like thirty seconds after we've left the construction yard.

There is a flurry of gunshots and then a jarring collision as the scoop broadsides a truck and smashes it out of our path. Vargas powers past the rear end of another stopped vehicle, ducking inside the cab as bullets clang off the roll bars.

"Fuck's sake," shouts Pike as he clings desperately to the back of the cab. He looks like he's going to be sick. Sondergaard, tied like me and balanced on the opposite wheel guard, is smiling. Pike sees the reporter's expression and shouts, "Oh, fuck off." 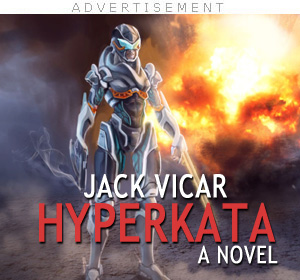 "Out of our hands," replies Sondergaard, just barely audible over the revving engine. "So enjoy the ride."

Vargas drives the Cat down an alley so narrow the scoop tears bricks from the building on our right. They clatter into the scoop and raise a cloud of dust. When I look back I can see the entire side wall of the building slumping into the alley, spilling bricks and more dust to cover our tracks.

The next intersection is clear and in the one after that there's just a fire-blackened school bus that Vargas easily rams out of our path. I can see on the glowing screen of the nav that we've almost reached the edge of town. The buildings are smaller and less densely packed. We pass into a block where the sounds of fighting seem muffled and the air is thick with smoke from fires burning in gutted cars and commercial buildings. Flames are still roaring a block over. The distinct shape of a church and steeple stands in relief against the fire.

"A sign," shouts Vargas. "God is watching out for us. He provides."

"Let's hope Quincy provides," I say, gritting my teeth as the Cat crunches a path through the fire-scoured cars in the street. Without warning, Sondergaard screams and grabs his side. He's been shot. I didn't hear anything over the engine noise and grinding of metal, but I can see the ragged hole in his shirt, just above his waistline. He swings on the cords tying him to the cab, blood, uncorked, streaming down his back and leg. He swings so wildly he nearly falls onto the tire.

"Get your hands on the cab!" I shout to Sondergaard. "Pike, steady him. He's been hit."

It's bad. Looks like maybe straight to his kidney. Sondergaard, so calm a moment ago, is inconsolable, fighting with Pike and on the verge of pulling both men over the side. Their cords are tangled and they are slipping off the precarious footing.

"Should I stop?" Vargas cranes his neck to see what is happening.

"No, damn it, get us to that field," I shout. The last thing I want to do is untie my only safety line and climb over the bucking hindquarters of the Cat, but it's exactly what I do. Trying to steady myself on the engine compartment, I cross the space separating me from the tangled figures of Pike and Sondergaard. Now I'm fighting with both of them, trying to get a utility cutter from the Cat's toolkit around Sondergaard's safety line. Pike whacks me in the nose with the back of his head and blood wells in my nostrils. I shake off the pain and get him untangled from Sondergaard, shoving him back into his spot behind the cab.

Sondergaard's face is bloodless gray. He looks right through me.

Whatever my plan was, it doesn't work. Sondergaard isn't listening to a damn thing I say. I cut him loose and he starts hitting me and flopping against the back of the cab. I have to wedge me knee into his groin and push my shoulder into his chest, hoping one foot on the engine compartment will keep us both stuck in place. For a minute or so, it does. Vargas yells something, but I can't hear him with Sondergaard screaming in my face.

The Cat collides with something so hard the blow dazes me, but it keeps moving, crunching over shattered concrete, dust and rock fragments showering all around us. The earth mover pitches forward, headlong down a steep slope, and that's it for my plan. Me and Sondergaard go over the top, banging painfully onto the scoop and sliding right out in front of the Cat. Dead meat about to be pulped under those huge tires.

But Vargas has plowed through a concrete retaining wall and over an almost sheer embankment, and the Cat's center of gravity is changing. The vehicle slews sideways and starts to tilt. Slow at first, but gaining momentum, it rolls over us, somehow completely missing the both of us as it spins in a messy, violent roll down the embankment.

It's a miracle I'm alive. Another miracle that I'm not knocked out or crippled. Maybe Vargas was right about that church. I even have Bennett's revolver still stuffed down the waist of my pants, although his radio is long gone. Everything is so quiet after the sound of the crash. Down to the ticking of the engine, the patter of loose stones falling, and the seemingly distant rumble of the last gun battles echoing through Corpus Christi. Sondergaard is close enough for me to touch. He's not screaming anymore. Probably in shock. I can see his chest still rising and falling and his eyes are open.

I stagger to my feet and survey the damage. The rolling earth mover has torn a furrow in the embankment all the way down to the bottom, where it lies steaming and half-covered in dirt. The smell of spilled diesel is strong. Pike is getting to his feet not far away. He must have been thrown clear of the Cat when it started rolling. His face is bloodied from a gash in his temple, and he's limping, but he's alright. Vargas I can't be so sure about. He rode the Cat all the way down.

Pike helps me get Sondergaard on his feet. The wounded reporter is conscious, looking from side to side, but in a daze, and with little control over his legs. Pike holds him up. I take off my jacket and pull the lining out of it. I stuff the thick fabric against the bullet wound. There's no exit, so the bullet is still floating around inside him and there's no way to know how bad it is on the inside. Pike takes over holding the lining of my jacket against the wound, keeping pressure on the bleeding.

I get them moving towards open ground and then head down to the Cat. Vargas is groaning in the cab. It's partially deformed, but otherwise intact. Vargas is hanging upside down from the seat harness and he looks to be almost completely unharmed. I help him out of the wreck.

"Am I alive?" he asks, looking back at the smoking earth mover.

There are road flares in the earth mover's toolkit. I fill my pockets and Vargas and I catch up to Pike and Sondergaard. It's open country ahead of us, half a mile across flat ground to the nearest road, but the light from the fires of Corpus Christi make it feel like evening. We limp along for about a hundred yards before Sondergaard just can't take it anymore. He sags to the ground and I can tell we're going to have to carry him if we want to keep moving. No point going any farther. Either Quincy is going to see us on his drone and pick us up, or somebody else is going to find us.