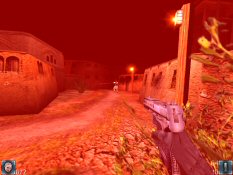 Nina doesn't let incoming rifle rounds stop her from calmly making remarks like "Noice surrahndeengs!" and "It's dayngeras ta store flahmmables in this way."After gaining this valuable information on where to go, each level requires you to solve a puzzle that involves hitting switches and backtracking through each level 20 times. For example, in the first level you need to infiltrate the terrorist base by jumping down a well. But uh oh, the well is protected by a bunker! And in a wonderful display of sloppy game design, they simply put an invisible line on the platform that leads to the bunker, and as long as there’s an enemy in the bunker, crossing this line makes you immediately die. But that’s okay, because you can use the sniper rifle on a nearby platform to shoot the guy out of the bunker. But uh oh, the ledge is too high to climb to! Luckily there’s an elevator platform that goes up to it. But uh oh, the elevator platform doesn’t work because there’s no power! Luckily you can climb across the power lines to a generator nearby to turn it on. But uh oh, there isn’t any fuel! Luckily there’s a nearby room with a can of fuel. But uh oh, you can’t get into the room because it’s closed in and shooting the conveniently placed explosive keg will kill you! The final “luckily” in this level is a small window that is inexplicably placed in a big chunk of stone that divides one hallway from the next.

So in order to get into the damn well, you need to backtrack all over the place and find the room with the little tank of fuel, open the little window next to it, run through a few more hallways to get to the outside of that room, fire through the hallway to blow up the explosive keg from a safe distance, run back in and grab the fuel, find the generator and pour the fuel in, turn it on, find the elevator platform again, ride up to the sniper rifle and shoot the guy in the bunker, and your reward is that you get to fall down a well.

I don’t think City Interactive understands that cramming every level full of stupid chores isn’t a “puzzle," since figuring out what to do requires almost no thought (especially with Nina constantly vomiting out annoying hints like “Oi can see fuel. Oi must git thah.”) and they only add challenge because the player then has to run back and forth between a bunch of identical rooms looking for an item. It doesn’t get any better later in the game when you have to find a button to drain a lake full of radioactive waste in the middle of nowhere, and go through a half-dozen variations of “Shoot the explosive barrel to take out all the bad guys or open up a secret room, whee hee hee!” 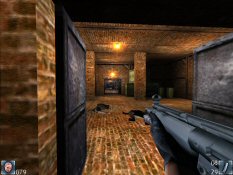 You can tell you've encountered a real terrorist hotspot when you're inside a well, every surface is made of brick and huge crates are scattered all over the place.

But don’t worry, all that running back and forth will give you lots of time to drink in the game’s wonderful graphics, which would have been considered bad back when Half Life was coming out. The fact that this came out in 2003 makes the graphics aggressively and offensively bad, like the art team went out of their way to inflict pain on you, and every frame of grainy, jagged, Lithtech-powered hideousness that enters your eyes feels like the game is slapping you in the face, calling you fat and raping your mother with a chainsaw. My favorite part is the enemies, who sometimes run like normal people and sometimes simply plant one foot on the ground, lift the other foot into the air behind them and glide around like hardline Islamic figure skaters.

When an enemy gets within 30 feet of you he will stand in place and awkwardly jerk around like a dog trying to dry himself off, and sometimes he will point his gun at you and make it emit white lines that slowly fly through the air in a random direction. When you kill an enemy he performs a strange headbanging dance and then collapses while blood starts leaking out of his chest, no matter what part of his body you shot.

The game takes you on a wonderful journey from your starting point, Generic Middle-eastern Village, to such exotic locales as “a random office building” and “someplace in South America I guess.” But you probably won’t have to suffer for too long, because after listening to Nina throw out random one-liners in her inebriated drawl for ten minutes, you will develop a powerful urge to plug your ears with live ammunition and stick your head in a microwave. Having narrowly avoided doing this on several occasions, I can now keep a copy of this game on hand to show to Polish people who ask why they’re the butt of so many jokes.