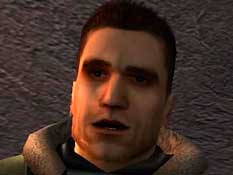 "HELLO. MY FACE IS MADE OF FLESH-COLORED STEEL."You'll be able to recruit up to four of these guys at once. One of the primary selling points that Universal Interactive used to move this game was the squad combat and fear / trust issues. In theory, your team members are supposed to react like "real" human beings would in their situation. When they're in a bloody alien environment, they should get scared. If they don't know who you are, they should have a difficult time trusting you. However, Computer Artworks apparently spends a large amount of time hanging out with very odd people, possibly from another dimension, as the squad members in "The Shitty Thing" act nothing like this. Situations are resolved in the following fashion:

YOU: "Oh hello engineer, why don't you join my squad of puking bastards?"
ENGINEER: "I don't trust you."
YOU: "Here, have this large gun." (Hands engineer a large gun)
ENGINEER: "Oh okay, I trust you now." (Pukes anyway)
REST OF YOUR GROUP: (Pukes in triumph)

It doesn't really matter if any of your groupmembers have weapons, as they all either end up dying in scripted events or are infected with The Thing. 99% of the people you meet in this game have The Thing inside of them and are simply waiting to hit the right invisible scripting tag which cues them to transform into a bloody beast. If you are low on weapons and think you can't risk giving a gun to that new medic you just rescued, put your mind at ease; chances are high that he'll drop his weapon and turn into an alien within seconds of joining your squad. Out of pure curiosity, I decided to reload a game before the point of a medic turning into an alien. I shot him in the chest and killed him instantly, showing absolutely no signs of being infected with The Thing virus. Either this means the aliens have a really damn intelligent virus or the Earthlings have a really damn shitty coding team. My other group members saw me kill what appeared to be an uninfected man (since he died without turning into an alien) and then lost trust in me because my battle plan appeared to be based around "shooting teammembers in the chest." Now I don't have any problems with shooting my own soldiers in the chest, but they sure as hell better not get pissed at me when I blow one of them apart because they're aliens. Not that it matters anyway; they all turned into aliens and died about 12 seconds later.

Like all survival / horror games, "The Shitty Thing" has certain puzzles you must solve before moving on to the next section. These puzzles consist of such brain-busters as "shoot this barrel full of explosion juice" to "open this door by using your hand." Sometimes you'll need to find an engineer to fix a junction box for you and they'll willingly do so right before turning into an alien. I don't have any problem with puzzles, but the sales pitch regarding this was 100% completely false:

Puzzle-solving can be accomplished by a multitude of scenarios - there is not just one way to accomplish an objective.

Okay, perhaps I missed something here, but every single puzzle I found could only be solved in ONE SINGLE WAY. Hell, even all the walkthroughs say the same thing about overcoming each so-called "puzzle." Maybe "turning on cheats and skipping to the next level" counts as a "multitude of scenarios," because the game's about as linear as Louie Anderson's family tree. I tried to enlist other group members to help me solve certain puzzles but all they did was retch all over the floor and explain "we're all going to die here!" before stating "I'm okay." All my team members had such incredible faith in me that after shrieking "we're all going to die here!" they would invariably follow up by remarking, "I'm okay" to let me know that they were, in fact, now okay. One time I decided to shoot my engineer in the stomach because he was sassing me with all his junction box fancy talk and, after being hit with a shotgun at point blank range by yours truly, exclaimed "we're all going to die here!" I didn't give him enough time to throw up before shooting again and killing him. 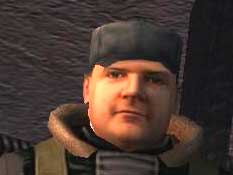 As you progress through the snowy fields of snow, you'll encounter a wide array of aliens, all of whom look exactly alike. There are the tiny face aliens, which are mutant heads on little legs. Then there are the bigger aliens which are the same color and shape, only a bit bigger. Then there are the fat aliens which are bigger and fatter. None of these aliens really have any distinguishing attacks or sounds to tell them apart, and they all settle for trying to maul you to death with their meaty arms. Oh wait, one type of alien attacks you by - you'll never guess this - THROWING UP ON YOU! Actually there are two aliens that try to spit up liquid death, which leads me to believe that the producers of this game spent a lot of time puking while creating it. Do I blame them? Not really, after all we're all going to die here!

The aliens are all essentially meaty, vein-filled rectangular tentacles which shriek like a cat on fire. Some of them have the power to smash through doors, a skill that comes in very handy because none of them are smart enough to turn the doorknob or knock and claim to be a representative from The Publisher's Clearinghouse Sweepstakes. They just run around and randomly try to attack you. I guess that's at least one of the positive points in the game; the computer displays fairly good pathfinding skills. There were only a few times my teammates got stuck in world geometry and couldn't follow me around, which is definitely a big plus in the current "hey, your team members are all as intelligent as charcoal grills" trend in games.

Speaking of charcoal grills, the sound effects were all apparently recorded inside one. At best they're the worst, and at worst they're even worse. Survival / horror game designers don't seem to understand that sound is such a crucial role in games and atmosphere. Sound builds up the offscreen tension and isn't simply something used to bridge gaps between crappy cutsceens. Ambient sound effects in "The Shitty Thing" cut off and start randomly in mid-sound, making it appear as if you're battling a large malfunctioning tape recorder. Music is fairly nonexistent, playing for roughly six seconds total in about three levels. I think the producers were only able to record six seconds of music from "The Thing" CD soundtrack before their trial version of MusicMatch stopped functioning. Oh well, at least they didn't have a chance to rip any songs from Fred Durst.

To balance out the terrible sound effects, Computer Artworks decided to employ some of the most overly dramatic voice actors in the industry. Hell, they're so over-the-top dramatic that I don't even know what industry they're in anymore. Every word your character says sounds like he's a doctor in a soap opera diagnosing the lead character with cancer. When the game reached its thrilling climax and the protagonist said, "it's game over, Whitley," I began laughing uncontrollably and vowed to some day figure out a way to get that mp3 embedded in my skin and be available to play whenever I touch a button on my arm. It'd be a great conversation starter, particularly when I want people to think I'm insane.