The graphics are perfectly mediocre with overly bland and blocky textures taking up most maps. Character faces are well detailed and realistic, at least until they begin to speak. Then they suddenly become "Mr. Plastic Surgery Skull," their facial skin moving so tightly that their skin resembles flesh-colored Saran Wrap looped around a polygonal watermelon with eyes. Fortunately none of them have nothing interesting to say except "we're all going to die here" and the sound of puking, both of which really help the plot move along at lightning speed. 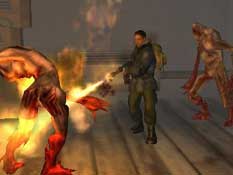 Oh no, alien lump #1 is attacking me while alien lump #2 approaches from behind, oh the horror!

And oh what a plot it is! I don't want to spoil it for you, but let me do it anyway: the game's plot is exactly that of "Half-Life," right on down to the whole "oh no, the government has suddenly become evil and is sending in its own team of special ops to kill you, oh no" cliché. There are three bosses in the game, all of which are the exact same alien in a larger size than previous levels. The final boss requires such intense and out-of-the-box combat techniques that I'm fairly sure nobody except Albert Einstein could be able to solve it. Let me set up the scenario for you and see if anybody out there can possibly put the pieces together to figure out this eternal enigma:

1) There are five exploding barrels that, when shot, blow up and constantly shoot fire inwards.
2) In the middle of these five unexploded barrels is the head boss badguy alien tentacle rape demon.

I sure as fuck can't figure this one out, maybe I'll need to call the 1-900 cheat line and ask a trained operator for assistance! Or, even better yet, I'll call 911 and report my own murder!

Once the completely unexpected plot twist of "oh no, the government now suddenly wants you dead" takes place, the evil covert op soldiers start shooting at you and trying to make you dead. Fortunately, their AI rivals that of the aforementioned charcoal grill. You can kill one of their friends standing right in front of them and they'll hardly ever move. When they do move, they'll try to hide behind a box or rock, at which point they'll stand up and publicly invite you to shoot them in the head. Their animation is even more alien than the aliens' animation, and it's fairly evident they were modeled in Poser 1.0 beta. They aren't menacing and threatening looking like the soldiers from "Half-Life," they're just about as scary as the flying Koopas from "Super Mario Brothers."

I could go on and on detailing the many reasons why I don't like this game, but they all boil down to one element: disappointment. This game had the potential to be so promising; it was based off an excellent movie, it had pre-established atmosphere, and was built around a very compelling storyline. However, Computer Artworks threw all that away and instead decided to churn out an incredibly derivative clone of basically any game on the survival / horror market mixed with trace elements of "Half-Life." I've stopped thinking of this game as the one that "could've been" and just write it off as the one that "never was" because Computer Artworks, whose previous coding experience revolved around making an entire screensaver all by themselves and a little help from their parents, shows absolutely no signs of creativity or ingenuity whatsoever. Well I guess the spontaneous puking was pretty original, as well as the random times when your team members decide to pee all over the floor, but the creativity ends with the expulsion of bodily fluids. I suppose it doesn't really matter since we're all going to die anyway.