In Chapter 9 which is one of the best chapters I talk about what sort of future I imagine for the Palins. 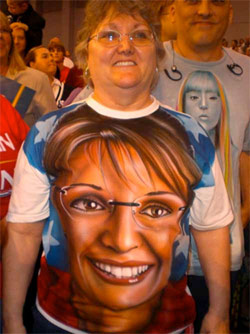 I wonder if some dude plows this while she's wearing the shirt. Like he's getting freaky with a giant sarah palin with a weird ass chin.Sometimes I like to sit in my bedroom with Rush's 2112 playing at full volume on my Bose wave radio and think about the future. Will Susan G. Komen suck a dick for the cure? Will I ever like accidentally late at night watch one episode of that show Smallville? Will somebody finally make an electric car that doesn't look like it was designed for teenage Japanese girls? Can they make a pill that prevents girls from catching babies? Could we have slaves again, but not like black slaves or anything weird, like other white people as our slaves?

The other thing I like to think about when I'm contemplating future is what what people I know will be like in the future. Of course we've all seen how Bristol is going to get enough surgeries until she turns into Snookie and then she's going to dopplegang her ass just so she can throw a drink at some gay guys face.

Mrs. Palin can do whatever she wants. She's dumb as all hell and lazy as fuck. I one time watched her laying by their above ground pool yelling for todd and when he finally showed up she asked him if he knew how many blondes it takes to screw in a lightbulb and he was like "how many" and she said "no seriously I want to know I was just thinking about that and needed an answer." But she makes up for being dumb and lazy by being super mean.

I remember when I first started dating Bristol and Mrs. Palin was putting all these crystal pyramids on a shelf and I asked bristol what they were and she said they were her mom's trophies. So I go over and look and it's like 30 of these heavy ass paperweights and each one is for something retarded like 1985 YMCA Bowl-a-thon champion or whatever. Turns out mrs. palin just buys these things at the goodwill and keeps them around to throw when she gets mad. If you get her pissed off she goes in mama grizzly mode and fucking look out. She one time bit off a dominos pizza guy's finger because it took 32 minutes to get there. 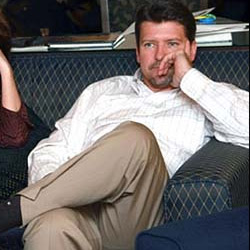 todd doing what he does best: fucking nothingThat lactonic motherfucker todd is going to either be dead from a horse dick or he will be a serial killer. You can see it in that mustachy smile of his. Dude is yearning to chew up some fried baby balls or something. Put on a gimp mask and chase kids around an abandoned amusement park. It wouldn't surprise me if he's got some human centipede or dr. phibes shit stored up in a notebook somewhere like he's going to just come out one day covered in syrup and castrated and be like "ITS THE REVELATION OF THE NEW SEX" and he's going to have some manifesto about drills and brain pussies and the tv news will call him the homo driller or wicked drillman or something.

Willow Palin is going to marry two black dudes from the New York Yankees. Like maybe not black dudes, but those black guys from Dominico or whatever who play baseball. They're not regular black dudes. I don't know what they're called. I don't know about careers. Is there some sort of job you can get for being pounded so hard 24/7 your cooter flips inside out and you end up with like an ear and half a jellyfish looking thing downstairs? If there is she'll be the CEO of that.

Sometimes thinking about the future messes with my mind. I saw this ad on this stupid website for a website where you can plug in a picture of a family member and see what they'll look like in 20 years. I put trog in there to see what he would look like because I worry about that little beast. Much to my changrin he was a fucked up melty goblin. 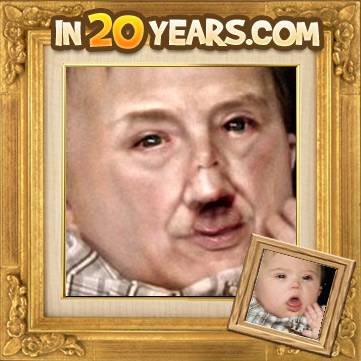 I was like WTF he can't get a job looking like that unless his job is looking fucked up and people are paying you to be horrible and scary. Hopefully there's just a glitch in the cybernetwork thing. My boy was meant to be a champion and strongest man. I won't rest until I see him wearing a single and carrying a giant maltese cross around.

Then I thought well the palin that fucking scares me most is Piper. She's been throwing dead cats down my chimney and told me she's going to do things to my dick with a flathead screwdriver I don't even want to think about again. She's been paying some guy to drive her around town and a lot of times I'll come out of a movie or out to get the mail and she'll just be staring out the van window with night vision goggles on. She claims she's going to make my skin into a dress.

Well needless to say when I put her picture into that same website the result was pretty fucked up indeed. 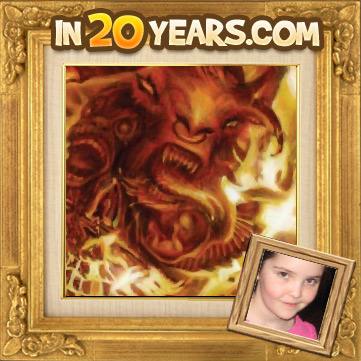