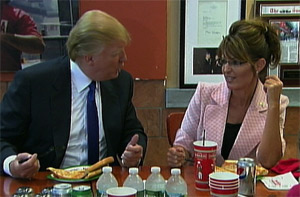 In some alternate world Fringe shit this what the situation room looks like at the white house right now and they're discussing whether or not to buy monster trucks for the navy.Of course Mrs. Palin stopped in New York to eat pizzas with Donald Trump. I bet that was a real summit in there. I'm surprised nobody walked out of that room with cancer cures and fusion reactors and shit.

I would go hang out with trump and all his baller friends like don king and alan greenpants except instead of eating pizza I would go to one of those secret parties dude has where you all have to wear president masks and they paint all these naked models white and make them stand on plinths whatever the fuck that is and then later everybody does a bunch of weird drugs I've never heard of like Klute and Razzmatazz and then gets it on. After that they bring in homeless people and make them fight weird animals like snakes and big lizards and I know I saw a stegosaurus in there one time. 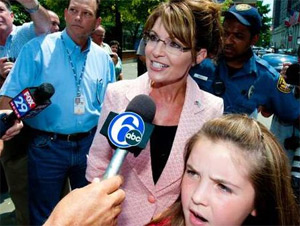 If you see this face you should have the same animal sort of reaction like you just saw a cloverfield or some shit.The other thing I noticed about this big bus tour is that Piper Palin is everywhere. She is all over the place hanging around all ominously like a devil ghost or something. The last time she went to NYC she came back with cobweb tattoo sleeves and DO WHAT THOU WILT on the back of her neck which sounds like it might be from the constitution. She got lippy with some dumb fucker from Time magazine and told him "thanks for ruining our vacation" and everybody is flipping out and saying daw how cute this little girl is being all sassy meanwhile they're hearing the fucking saber tooth tiger growling and still waving meat around its face.

Piper Palin tore shit up back in 2008 and that was before she started writing on the walls and having those weird trances and buying crazy Mexican knives off ebays. Just some of the shit she pulled on the 2008 bus that I saw personally:

So my message is for the media to be careful when they fuck around with Piper because she has put bodies in the ground before. She doesn't care about life or death or anything. She's not afraid of prison. She said she can do a year in solitary just meditating about like infinite platoos of hell and rivers of blood and shit. She's like that british charles bronson meets the natives in cannibal holocaust meets the bad guy from warlock.

Do not fuck with Piper Palin.