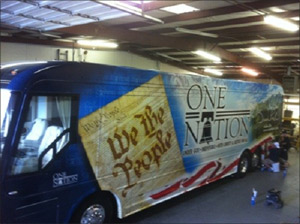 You might as well put a picture of a fucking calculator on the side of a baptist church bus.If you've got a TV you probably also heard Mrs. Palin is running awry up in the guts of America on her One Nation tour. She's got a bus with the constitution on the side which is hilarious because if that thing were a book she would have got lost reading the back cover.

This is the woman who I saw throw a spaghetti noodle box across the room because of the complicated recipes. For a long time she thought Google was a person and kept asking how do I talk to him. She did not read the constitution. I would be surprised if she read the part of the constitution printed on the side of the bus in ten inch letters. But don't take all that to mean she's stupid. Oh, she is that too, but she just doesn't trust things that aren't said out loud.

"If you have to write it down then you're tryin' to twist up the words and that's not what the American people want in this great country called America we all live in but some of us more than others and also the Indians didn't have a written language they wrote in beads," I heard her one time scream at a bottle of plant food and then told that lactonic motherfucker todd to throw the plant out in the snow, which he did, but it wasn't even a real plant, it was a coke can that plays "do you think I'm sexy" and dances back and forth when you press a button on it. 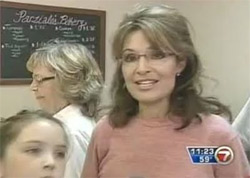 And yankee doodle invented macaroni.So let me just say when I heard about the Paul Revere incident where Mrs. Palin said this shit...

...I was not surprised too much.

She constantly gets everything wrong that could be at all construed as history. One time I saw Todd watching history channel about something like aliens building the pyramids and they put up a picture of an alien, like just a sketch some dumbass drew, and she thought it was King Tut AND she thought King Tut was related to Lion King when that came on later and then the next day she was on Larry King and she called him King Tut and asked him about his space ship and when he acted confused (which he did all the time) she said "I had a dream" and winked.

I also heard Mrs. Palin is trying to say that the media got it wrong with that Paul Revere stuff and she got it right. To be honest I don't know what's true anymore because all I watch is Fox News and all I remember for any length of time are hunting and fishing shows on CMT and what the room smelled like Saturday after I dropped the D on Kelly Crimmoth who is going to beauty college but probably needs to go to beauty grade school first to take care of those blackheads all over her back. Plus girl got Shrek nose but don't tell her I said that. So who knows, I guess we'll have to leave this one to the experts on the blogospheres.