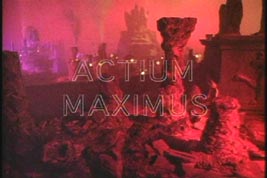 The Case Against: If you had asked me yesterday whether I thought alien dinosaurs were cool, I would have said yes. Now, I'm not so sure.

Bear with me. This one's a little strange. 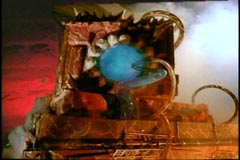 I had the Polpox once. My junk itches just thinking about it.Actium Maximus: War of the Alien Dinosaurs is set on the planet Actium, in the Actium Colony, the home of the annual Actium Maximus Karnivale, a gladiatorial event where various large, vaguely lizard-like monsters - alien dinosaurs, if you will - battle to the death. The event is a wonderful opiate for the masses, and so it is the favorite time of the year for Actium's dictator, Grand Automaton Polpox, a talking box with a blue nub on the side. Polpox and his right hand man, a talking pointy rock, use Actium Maximus as a distraction while they plot the genocide of a race of squid-like creatures who stage approximately three assassination attempts per day on the Grand Automaton. It's actually pretty impressive that he's survived this long, seeing as how, once again, he's a talking box with a blue nub on the side. Polpox fears that these constant assassination attempts may be undermining his authority, so he sends his best alien dinosaur collector, Omni-Turor Jacinium Axezun, to go fetch a rare and dangerous new specimen to spice up this year's Actium Maximus. However, when Axezun reaches his destination, a far off world, he doesn't find the creature he's looking for. Instead he comes across an ancient and massive spaceship that may or may not be the rotting corpse of an evil god, and furthermore may or may not contain all the knowledge of every computer system in the history of this quadrant of the galaxy. Axezun decides not to find out and wanders off to do battle with a colossal alien penis. Meanwhile, Polpox, fed up with all the assassination attempts, retires to his private chambers, where an alien moth attempts to assassinate him.

That's the whole movie, start to finish, and if it seems confusing crammed into one paragraph, just trust me when I say that it doesn't make any more sense stretched out to an hour and fifteen minutes. 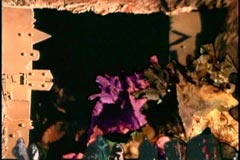 This image shows three alien dinosaurs chasing some people. If you didn't see it right away, it's because YOUR MIND HAD BEEN BLOWN BY THE CUTTING EDGE SPECIAL EFFECTS!I can understand what writer/director Mark Hicks was thinking when he set out to make Actium Maximus. He wanted to give us a new sci-fi epic set on a distant world. Sure, when you break down the plot like that, it seems a little silly, but I'll bet that a story about a farm boy who becomes a space pilot and saves the galaxy using magic he learned from an old man and a green midget seemed pretty silly back when George Lucas first pitched Star Wars. The difference, of course (beyond the fact that Star Wars has interesting characters and an actual plot), is that George Lucas didn't try to make Star Wars before he had the budget necessary to pull it off. Actium Maximus stands as warning to all aspiring filmmakers of what happens when you compromise one time too many; when you stop doing things the way you dreamed of, and start doing them the Troma way.

Say what you will about Troma, and I've said plenty over the years, they've released some pretty entertaining stuff. Hell, even Actium Maximus is paired with Star Worms II: Attack of the Pleasure Pods, whichI have not seen, but I can only assume is awesome. Still, for every instant classic that comes out of the Troma factory, there are a dozen piles of crap. And Troma knows they're crap. They release them almost as jokes upon the viewing public. "You enjoyed Tromeo & Juliet?" Troma head honcho Lloyd Kaufman might say, "Then enjoy this. Ha! Fooled you! It's excrement!" Other times, though, it seems like Troma releases a movie as a joke on its creator. When the company chooses to release Mark Hicks' uncompleted vision, full of laughable puppets, unintelligible dialogue, and the worst use of green screen I've ever seen, you can bet that the joke is on Mr. Hicks.

You see, Actium Maximus was never supposed to be a movie. I don't mean that in the "nothing this awful was ever intended to exist upon this earth" sense. Well, okay, yes I do, but I also mean that Mark Hicks initially saw this as the pilot of a sci-fi television series. It is unknown whether or not he saw himself as the grizzled male lead, Omni-Turor Jacinium Axezun, but that's how he ended up. 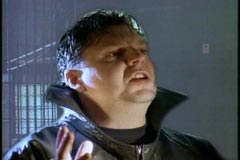 "Yeah, I ate the last Twinkie. Jealous?"Sadly, Mark Hicks does not quite fit the role. As the only person in the movie to actually appear as a human being (all others are either robots, monsters, or hidden under cloaks and masks like rejects from the orgy scene in Eyes Wide Shut), Hicks represents our species at our doughy finest. Looking like a cross between Nicolas Cage in Valley Girl and a marshmallow, and sounding like a cross between Napoleon Dynamite and, well, a marshmallow, Hicks portrays Axezun as a man tired of racing across the cosmos at the whim of a bunch of stupid machines. Unfortunately, since he is the only character who speaks in clear English, he is our only link to the story, so if he is tired, we are tired; if he is bored, we are bored; if he is fat, we are fat; and so on. The fact that he feels a need to shout every one of the lines that he himself wrote with all the nuanced subtlety of an irritated "Gosh!" does not help matters. Every time he speaks, you can see gravity taking its toll, bringing Hicks one moment closer to that day, a few years from now, when his facial structure gives up the fight for good and he becomes more jowl than man.

If I am rough on Hicks and his portrayal of Axezun, it is only because I care, and also because I hate this movie. See, I could overlook a bafflingly terrible performance from the movie's writer and director if there was anything at all to redeem it. Okay, that's not fair. Mark Hicks also composed the music, which is admittedly kind of kickass, in that in-the-future-all-music-will-be-Eighties-metal kind of way. But Mark Hicks also was at some point responsible for looking at a bunch of lumpy puppets covered in corn syrup and saying, "Yes, these are what I want." It should be noted that the alien dinosaurs in this movie are not at war, despite what the title might lead you to believe. In fact, they don't really seem to want to fight one another at all. They really just want to wave in place, almost like they have a hand inside them, and that hand is connected to a person who would really like to be somewhere else. Their fights for the amusement of the Actium Colony consist of two or more creatures bobbing in place for upwards of three minutes. And for the record, if you hear the words "alien dinosaur" and the first thing you think of looks like this, call an Imagination Mechanic, because you're on the fritz.