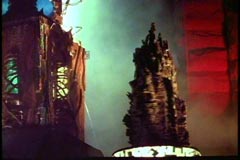 That pointy thing is one of the main characters. I'm not kidding.The real stars of the movie, however, are neither the alien dinosaurs nor Axezun, but rather Grand Automaton Polpox and his cronies. I don't know exactly how Mark Hicks intended to sustain a TV show where the ruling authority is a cardboard box whose main personality trait seems to be a propensity for being assassinated. Polpox would be absolutely hysterical if only you could understand him. Unfortunately, all of the robot characters (I'm including the species of talking pointy rocks in this, as they are at least mineral-based) have had their voices run through filters so many times that they become completely unintelligible. It's like an entire planet populated by Kenny from South Park, except that in addition to a parka, he's trying to speak through an inch of solid steel, while underwater, in a ballpark bathroom. At first I thought that the robot characters were just making random beeps and squeaks, like R2D2, but eventually subtitles appeared and made it clear that there was actually human speech buried in there somewhere. These subtitles come and go without rhyme or reason throughout the movie. Often, subtitles will simply cease to appear in the middle of a conversation. At one point, a subtitle actually reads, "unintelligible," which is a lot like writing "hot" on fire. 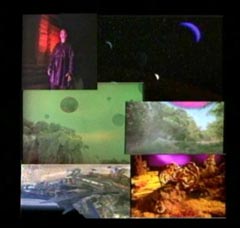 Sure. Why not.When Axezun leaves to find a new creature to do battle in Actium Maximus, Mark Hicks jazzes things up by bridging the action with state-of-the-art transitions between the thrilling scenes of Axezun half-heartedly exploring a new planet and Polpox screeching about assassins back on Planet Actium. Like the hit show 24, Hicks uses multiple frames to show what is going on in different locations at once as a way of transitioning between scenes. Unlike 24, Actium Maximus only has two locations with concurrent action, but Hicks felt the need to give us six frames, meaning we get to see not only the excitement of Axezun on a new world and Polpox nervously presiding over his people, but also such gripping images as a rock, a building, and some liquid.

As Axezun travels across the alien planet, he encounters a giant bad graphic, I mean, spaceship. A woman who came out of nowhere to accompany him, presumably so she could explain what's going on while allowing Axezun to remain aggressively disinterested, clues us in that this ship may or may not be a dead god, and that either way, it could contain a huge wealth of information, including a map with some sort of riddle attached.

Woman: "It's a map! A map with a riddle! If we solve the riddle it will reveal a map!" 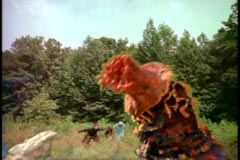 It's hard to capture in a single image, but trust me, that's a dick.What is the riddle? Where does the map lead? Who left this map here inside this dead god/ship? We'll never know, because Axezun loses interest and goes off to fight a giant penis. I wish I was kidding about this. He literally finds a giant tubular alien with a slit-like opening on top that holds people in place by spraying out gobs of thick, stringy, sticky white fluid. To be fair, the alien also attacks by picking up a rock with its slit and throwing at (read: nowhere near) Axezun, which most penises cannot do. Mine can, but I don't like to go around making movies about it.

Sadly, we never learn what becomes of Axezun and the penis monster. Instead we cut back to Actium Colony, where Polpox moves for the first time in the movie, chugging his way back to his private chambers with all the grace of a Dalek on shrooms. He thinks he's safe, but just then, a moth-like creature swoops out of the shadows and does nothing. We never learn what happens with Polpox and the moth, either. Can Polpox swat it without arms? Does the moth chew holes in all of the Grand Automaton's sweaters? We may never know, although the movie does threaten that this is to be continued. God, I hope not.

I could go on about how this movie was an abortion before it began, or how everyone involved seems to be actively trying - and failing - to retain their last shreds of dignity. I could point out that alien dinosaurs are cool in theory, but not when they look like walking fallopian tubes. I could talk about how sad it is to watch people in Klan robes and bad masks try to act frightened of puppets so badly green screened in behind them that they barely seem like part of the same movie. I could write a dissertation about the criminal psychology behind the decision to give all the robots impossibly annoying voices and only occasional subtitles. But I won't. Instead, I'll just say this: I'm really looking forward to Star Worms II: Attack of the Pleasure Pods.