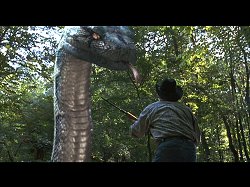 The big dumb animal sizes up the python that's about to eat him.The scene shifts to that evening, where a young couple are necking in a car in the middle of nowhere. Just as they are getting into it, the car shakes. "What was that?!" the girl screams, and the guy steps outside, finding nothing. Since there's obviously no threat whatsoever, he gets back inside, and as he starts going down on her, the car door spontaneously opens and he's dragged away by an unseen force while the girl moans for him not to stop and generally fails to notice that her boyfriend has been forcibly removed from the vehicle. Then the giant python that the guy failed to notice earlier sticks his head inside the car, and picks up where the girl left off. "Mmm, that feels good," she says, before looking down and realizing that the tongue belongs to a 100 foot python. To reiterate: "Boa vs. Python" features a giant snake having oral sex with a girl. I'd like to say that this is the first and only instance of this in the history of cinema but I am probably wrong. Once the girl notices she starts screaming which totally ruins the mood, so the python just eats her too.

Back at the herpes lab, the good guys' plan is fully explained: Agent Sharpe wants to use Dr. Emmett's giant boa to hunt down and kill the python, but first she wants Monica to implant her special cybernetic dolphin tools which will allow them to somehow track the boa and monitor its activities. Everyone seems to agree with this plan even though it makes absolutely no sense. Questions such as "why don't we just shoot the thing" and "what the hell makes you think a giant boa will be able to kill a giant python anyway" go, sadly, unanswered. Instead, Monica cuts open Betty's head and starts sticking stuff inside its brain, interspersed with shots of people stroking a length of big fake rubber scales, to show how affectionate they all are towards Betty, the giant boa who is somehow a good guy and would never ever eat a human being and won't at all mind having shit jammed into its brain.

After the surgery is complete, they transport Betty the Boa to an access tube and open the transport truck. The boa slithers down the tube and out of sight, instead of rampaging and killing the humans that caused it pain and misery. Monica, Emmett, and Sharpe follow it down into the pipelines, where Monica pulls out her laptop and begins receiving the feed from the big complicated implants that she stuck inside the boa. "It's working!" she exclaims, and for about 3 seconds they track the boa before the signal is mysteriously replaced by static. "I don't understand!" whines Monica, who probably should have tested her gear out of water after all.

The movie turns back to the ragtag group of hunters, who are wandering around a local forest because they apparently have a psychic guide leading them to where the python will turn up next. Broddick is carrying an enormous assault rifle, while Eve has changed into her best Lara Croft outfit complete with a pair of matching handguns, the perfect weapon for taking down a reptile bigger than God. Mr. Foley the supersniper is carrying his favorite sniper rifle, which someone notices is loaded with exactly one bullet. "Don't you think you might want a few more rounds?" Tex asks. "One shot, one kill," replies the sniper, who apparently idolizes Tom Berenger. Meanwhile, the two bumbling hicks stumble through the brush, the son falling down and swinging his gun barrel around wildly. "This ain't one of your dumbass video games, son," the father lectures. The son nods and falls down again. The father is disgusted. "I hate you," he grumbles. Actually that pretty much mirrors my hunting experiences, so I can't complain too much. Soon the hicks hear some rustling in the bushes and begin running around firing at nothing, which causes everyone else to run in random directions firing away like the elite trained hunters they are. Tex wanders into an opening where the python somehow appears out of a hole in the ground and eats him. Watch out, it has a taste for Republicans now!

Meanwhile, the scientists continue wandering through the pipelines, futilely banging on Monica's equipment, trying to make it work. The four-man squad of soldiers escorting them look at each other. "Let's bag this thing and call it a day," they whisper, and sneak off, leaving the scientists to fend for themselves in the dangerous bowels of a water treatment facility. Finally they regain the signal and to their shock, the boa is heads straight for the soldiers! They shout over the radios but the asshole soldiers ignore them for some reason. At this point the python somehow shows up and one or both of them attack the soldiers, who run around screaming. Dr. Emmett has an idea, however, and orders them to shoot the convenient steam pipes around them, confusing the snakes' heat-sensing capabilities and allowing two of them to escape. "Good work, Emmett," says Agent Sharpe, completely forgetting that the two others were messily eaten, in what will be an interesting letter to their families. 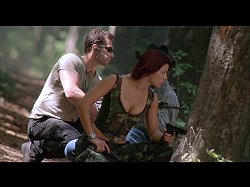 Well, at least she'll be concealed if she's ever hiding in a field of boobs.The snakes slither away to regroup and the good guys sit around figuring out what to do for a while, and Emmett reveals his secret motivation for being a snake charmer: his sister was killed by a snake. And what better way to avenge her death than by creating a giant cyber-snake and making it fight other giant snakes to the death? OK, that doesn't actually make any sense, but it's probably more than you've done lately. After Monica expresses sympathy for his loss, setting up their inevitable romance, Emmett suddenly has an idea: why not flood the pipes and force the snakes to try and escape the water, thus trapping them somehow? Agent Sharpe thinks this is just brilliant and immediately radios for mission control to open the floodgates, despite the fact that they are still sitting in one of the pipes. Before anything can happen Monica's computer gets a signal again and they see the two snakes having sex for some reason, probably to help fulfill another underplayed fetish.

Meanwhile, the remaining hunters have entered the pipe system in order to track down the python, and the sniper again repeats his mantra of "one shot, one kill." Just then they hear noises from around a corner and the sniper draws a bead. Something comes around the corner and the sniper fires! And then he fires again, and then again a third time. So he's obviously a liar and a fraud, since he fired more than one shot after all, and it takes three shots to down what turns out to be Agent Sharpe and not a giant snake, since the two are so easily confusable. While the good guys and the bad guys are arguing over what the hell is going on and why they just killed an FBI agent, the python appears and eats the liar of a sniper, then smacks around the hick dad while the hick son stands rooted to the spot, too scared to fire. The good guys manage to run away, as do Broddick and Eve, before the giant wall of water that everyone had forgotten about slowly bears down on the hick son, who stands there feebly aiming his gun but too afraid to actually do anything heroic. Then he's washed away without so much as a save game or a continue.

The movie gets increasingly bizarre, with the characters stumbling upon a nest of giant snake eggs, which were laid by Betty the boa after she somehow became pregnant from a combination of the snakes she ate for food and growth hormones. Betty protects the nest by eating the crazy bald huntsman and squishing Eve, just barely killing her without reducing her capacity for looking hot. Then the remaining humans are all rescued by soldiers and Broddick arrested for "poaching and illegal animal importing" which strikes me as fairly minor charges considering the giant python he unleashed has killed several people.

Soon Broddick escapes and hijacks an armored personnel carrier, which he drives to a nearby rave where the python is eating people. There he suddenly puts on a flamethrower and starts torching people, maybe because he is pissed off that his list of criminal charges is so lame and he wants something scarier to intimidate the other inmates in prison. Eventually Broddick is eaten and the boa shows up, and the two giant snakes end up in a subway station where they fight for literally a minute before Monica and Emmett push a special button to activate a stun gun they implanted, causing the python to get creamed by an incoming train and knocking Betty out, thus saving the world. Monica and Emmett walk up to the unconscious body of the boa, and embrace in a hug for three seconds, giving the boa just enough time to wake up and escape silently so when they turn back, it's gone! Do I smell a sequel? Unlike snakes, I can smell with my nose, and something stinks.