Speaking of J-Hyde, watching this movie must be like having a weird, alternate universe out-of-body experience for him. It's almost like he's watching himself in The Mummy, except in this version instead of being a useless, mincing, drunken coward, he's King Satan of Egypt. Well, actually he's kind of a useless, mincing coward in this picture too for the first two hours or so, but he manages to turn things around for the zany third act mayhem and human soul buffet. Don't worry, though, he doesn't compromise his polished Oxford etiquette while he's calling forth the legions of the damned.

You know he's really turned evil when he trades his white linens in for a stunning ensemble which may or may not have been fished out of the dumpster on Lot C behind the Matrix video game production office. And he has the good old shadowy Hellfire Council to thank, the group of extremely evil and British geniuses who thought giving unlimited supernatural power to one of their own was a great idea, and that he'd be totally cool with just continuing to hang out at their scenic Downton-Abbey-in-Hell headquarters and shooting the breeze once he became a living death god. What's that you say? All of them incinerated? Even Malcolm McDowell? Well, shit. On the other hand, his arch nemesis Danny seems to have earned a more poetic death, involving his own overwhelming personal shame and regret:

Come to think of it, this entire movie actually makes a lot more sense if you pretend the secret plot twist is that Danny is severely mentally ill (and also much more satisfying than the real ending twist.) All those legions of CGI flying monkey-demons and the resurrected, full-body-waxes, golden-winged King Tut? Hallucinations. Believing he really went to Ohio State and being shocked when the university kicks him out for having a fake degree and his publisher won't talk to him? Delusion and megalomania. We're not sure exactly what the poker game and camel chase equate to, but it's definitely something involving a mental institution, a bunch of guys who think they're Napoleon, and riding the ottoman in the community lounge. 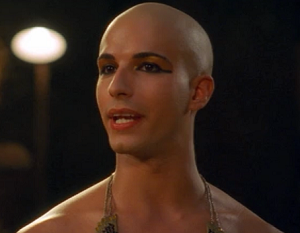 Thanks for coming guys, hit me up on Twitter @ILikeKingTutsAndICannotLie!Anyway, whether it's all in his head or not, being forced to perform mime acts in public has Danny pretty understandably pissed off, so instead of committing suicide he heads over to Jonathan's house to steal the Emerald Tablet of ultimate power from the maximum-security unlocked glass display case on his foyer credenza. After all, what's the point of being the Lord of Suffering if you can't brag about it to your cocktail party guests and ask if they'd like to touch it only to slap their hands away and tell them they couldn't?

Speaking of which, there's a shindig back at Tut's, the hip new hands-on Tomb/Museum for the grand opening of the Portal to Egyptian Hell exhibit, and every character in the movie is invited! Egyptian Hell is a place of legend and wonder, which looks like if the Netherworld from a particularly slapdash Mortal Kombat fan film was invaded by the flaming meteors from Enemy Mine. As we follow our heroes' journey, several important questions come up:

All these questions and more will race through your mind as you watch this journey, but they'll be gone in a flash as soon as you witness the climactic battle (or as soon as total brain death kicks in, whichever comes first):

We don't usually feel too compelled to stay faithful to the actual movie endings here, since "closure" is pretty far down the list of priorities once you've suffered through three hours of instant streaming garbage and your survival instincts are running high. But this time it's too utterly retarded for us to not spoil it for you. After Tut saves the day and kicks everyone out of his tombwarming party without so much as a "thanks for coming", Danny and his newly-acquired Egyptian squeeze magically find themselves back on the streets of Cairo, but it's like nothing we just watched ever happened at all! Not only is everyone dead back to life and oblivious as ever, but what's-her-face's freshly dumped and murdered ex now has a different wife and kids to make him unsad! It's a real fairytale ending, specifically one of those German fairytales where some children get their faces torn off by cave goblins for putting their elbows on the table and everyone goes criminally insane in the end! Hooray!

And the nice, smug cherry on top? Danny happens to bump into a fellow named Howard Carter and casually tosses him the map to the tomb, saying "Somebody's got to find it, might as well be him." See, it was 100% historically accurate all along! Ha ha ha. Ha. Ha. Jesus Christ, this is the last time we ever do a Hallmark Channel movie. See you all in Super Hell.