So the tribe of kids head out to find Dr. Trace, who is in seclusion and hasn't been able to be found for years. Of course these kids are able to track him down in 18 seconds. Cyber. The doctor has been hiding in the middle of the desert, away from all technology, for the past couple of years. How incredibly ironic. Virtual. Peter makes the doctor watch the footage from the first few minutes of this movie and eventually he agrees to help the kids out under the threat of being forced to watch even more. 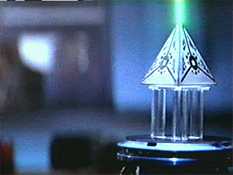 This is a computer chip from THE FUTURE.

In the meantime, the evil and evil Jonathan "Evil" Walker is trying to convince a state senator to fund his "Virtual Light" project, an entire computer network based in Virtual Reality. Yes, you read that correctly, all the hardware is based inside the software. Make sense? Cyber virtual. The key to the project is the Krylon chip, but we're never really told why / how it is. They try to explain how it all works by showing a diagram of a few blue balloons on a wagon wheel, but it makes no sense. The senator comes to the conclusion that "Virtual Light" will give too much power to the evil Jonathan Walker (how he figured this out, I don't know), and says he won't fund it. Walker gets all pissy and tells Jobe to kill him, so Jobe makes the senator's plane crash. This effectively kills him. Cyber.

Dr. Trace talks to Jobe (in VIRTUAL REALITY) and decides that he shouldn't help the "Virtual Light" project either. Jobe gets angry and tries to drive a subway car into them, but Dr. Trace is able to divert the train away by the ingenious method of pressing a red button repeatedly. Now we know that Jobe is evil. The kids and their doctor buddy go to a Federal Library to figure out who Jobe is working for and why they're so woefully inept. They figure out that Datatronic Systems (the evil Jonathan's company) is behind it in a remarkably stupid and lame bullshit techno-babble scene. Internet. The kids need a tracker to find the magical Krylon chip so they use the ingenious and extremely complex method of throwing a garbage can through a shop's glass window to steal the tracker. In the future.

The kids attempt to enlist the help of Cori, a GOOD doctor inside the project, by constantly being really annoying and getting hit by her car. This eventually wins her over and she defects to their vague, ambiguous cause. Soon Jobe starts fucking shit up inside the Virtual Light computer systems and some sparks shoot out of an analogue 8-track recording system in the corner of a room. Cyber. Dr. Trace and Peter sneak into the Virtual Light labs and attempt to steal the chip by replacing it with an ice cube. No, I am not kidding. That's their incredible plan they spent the entire movie devising. 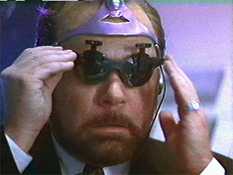 Somehow it doesn't end up working and alarms start going off, so they just grab the pyramid shaped chip and run away. Trace and Peter manage to elude the 400 security officers on duty and sneak out of the complex by jumping into the garbage chute. They bring the chip / triangle back to analyze it but... it turns out it was a FAKE CHIP! They were bamboozled! Tricked! Had the wool pulled over their eyes! Snookered! Fell for the old switch-a-roo! Made... uh... a mistake! Damn that Jobe! Virtual!

Speaking of Jobe, he's planning on "global interfacing" at midnight, where he will somehow take over the world. Through virtual reality. He displays his incredible power by causing fire hydrants to shoot out water and ATM machine to spit out money. Jonathan Walker (the evil guy) tries to stop Jobe, but it's too late! Jobe shoots a laser beam at Jonathan and causes him to fall down. As "global interface" time approaches closer and closer with every moment, it seems as if nobody can stop Jobe's reign of terror! No wait, the idiot kids can, and they do. Dr. Trace appears in cyberspace and hits Jobe with a sword, causing him to turn green, start shooting sparks out of his ass, and then blow up. His dreams of ruling the future virtual cyberspace world of the Information Superhighway explode into flames. How sad, or perhaps virtual.

There's not much I can say about this movie except for the fact that it's really, really painful. It's not even that amusing. Sure, the first 100 or so times they said "virtual" and "cyber" were somewhat funny, but then it just got old. Quick. The graphical special effects, which could've been labeled as "cutting edge" in the mid 1970's, are bland and unimpressive. Do yourself a favor and rent a few copies of "Max Headroom" instead of this convoluted mess of cyber-virtual-Information Superhighway crap.