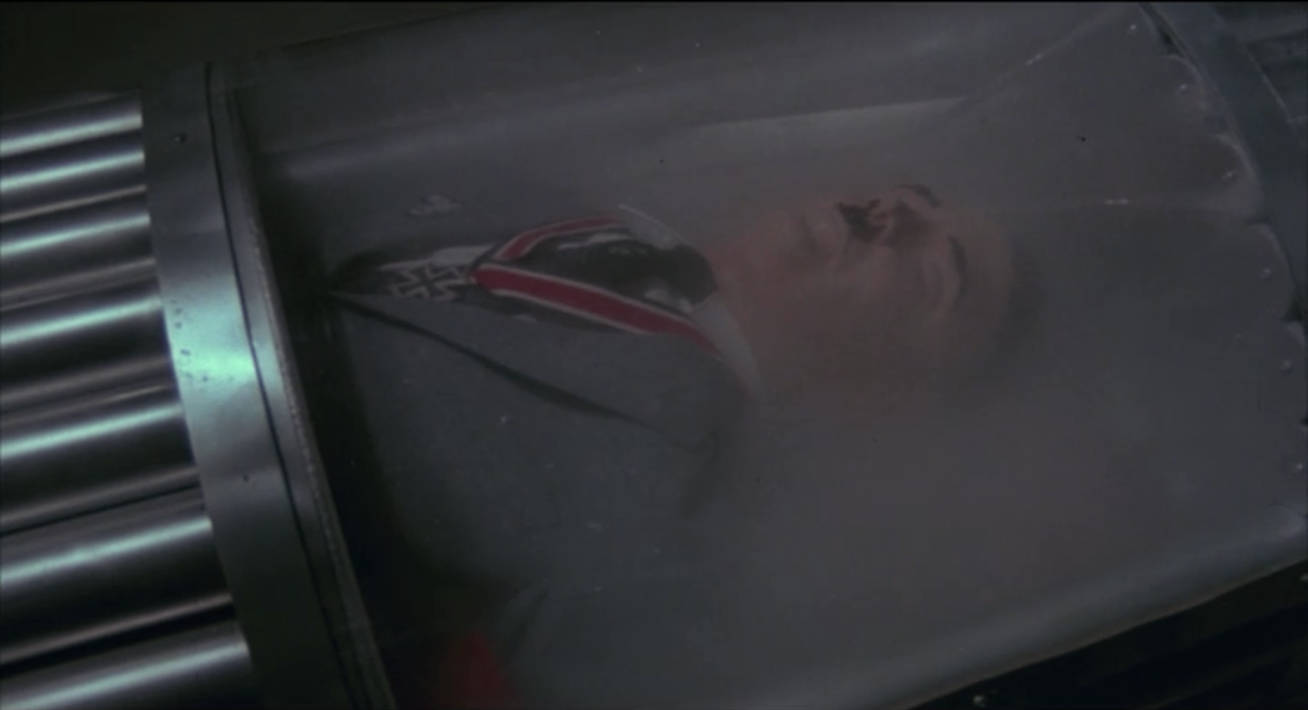 That scene sets the tone for the rest of this climactic firefight: ridiculous weapons, constant explosions, and extras in Nazi uniforms being flung all over the place by pneumatic catapults. Well, except for Cowboy, who sets his own goddamn tone, a tone that his facial expressions suggest must be some sort of deep existential crisis. Meanwhile, Duncan sneaks into the base just in time to be caught by Baron von Eggenstein, who trumps all of his previous villain appearances with this staggering performance:

Most screenwriters who indulge in the old "villain ruins his own plan with overconfident speech to the hero" trope at least have the common decency not to have said hero ask to hear the evil plan because "it would be sporting," but here we are. The Baron goes on to start laughing so hard that he misses Duncan picking up a nearby spear, hefting it, and throwing it 20 yards across the room and right through his doughy belly.

A very confusing race to deactivate ZE PROTON BEAM follows, the end result of which renders that whole big evil speech a few minutes ago null and void, so Duncan just decides to blow the place up, which as we all know is the universal solution to an unstoppable doomsday device problem. After taking the time to kill some Nazi stragglers, Jax and friends retire back to their boat, where they can revel in their win and enjoy more of the fantastic sounds of "River Boat Music That Sounds Like an Unraveling Cassette Tape in D minor."

Finally, since this is a James Bond ripoff of a movie, we have to end with some steamy victory sex in an exotic location. Duncan leads the generic love interest off to see his hot-air balloon, prompting the question "Do you think you'll have any trouble getting it up?" Man, you know you've come up with a great, subtle double entendre when it's so awkward that the characters spend a full minute staring silently at each other afterwards. The goddamn end. Oh, and there's a cryogenically frozen Hitler too, but Duncan smashes his freezer which makes his skull explode through his face. You know, in case you were wondering.

Many pressing questions remain, but the one weighing most heavily on our minds is: why the baboon sidekick who understands English and flips off everyone in sight? What sort of deeply broken, psychically scarred shell of a man went out and saw Any Which Way But Loose during a particularly dark coke bender in 1986 and thought to himself, "man, that was pretty good, I'd like to do a movie just like that, only with no star, budget, or comprehensible dialogue!"?

Well, as much as we wish that question were just rhetorical, it does - sadly - have an answer. An answer in the form of director Worth Keeter (yes, the Worth Keeter of Ghost Dog: A Detective Tail and Every Shitty Power Rangers Spinoff Ever fame), who, when he's not busy marveling at the cruel irony of his first name or looking like an over-the-hill Colombian drug mule, seems to wander around the house shredding and eating miscellaneous pieces of discarded shitty movie scripts and barfing them up all over the already dingy carpet of obscure cinema. Mr. Keeter, please enjoy our undying hatred and contempt. You've earned it.