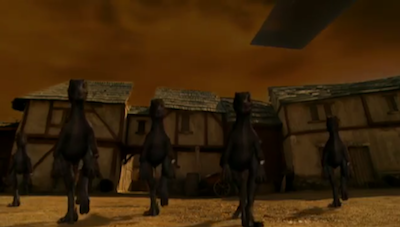 On the other hand, it's something of a mystery how these particular raptors were so efficient in wiping everyone out. In usual movie lore raptors are renowned for their intelligence and pack hunting ability. But on Planet Raptor, it's not the dino in front of you that you need to watch out for, it's the two to the...no, never mind, it's just the one directly in front, walking slowly towards you and making lots of noise. Somehow, the ineptitude of the local dinos doesn't make things any better for our friendly neighborhood marine squad:

That first raptor was just kind of nuzzling him to death. You know you're in a really shitty production when even the CGI animals aren't trained properly.

We can hardly blame them for not having their head in the game, since their mission is to babysit a "science team" which include a woman who seems to be playing Candy Crush on her future phone the whole time, and another lady who likes to MacGyver priceless alien artifacts into bombs without having any clue what the fuck she's doing. Finally, the medic spends most of the ground mission sneaking up behind all the soldiers and giving them surprise injections with a rusty screwdriver, and later reveals he's there to watch everyone die to raptors up close (having not thought to ask during the mission briefing "how do I not die to the raptors also?")

This leads us to the "big" "reveal", which is that the whole mission is meant to be a "field test" of the raptors they found on this stupid fucking planet, for military purposes. And here we thought millions of years of evolution was enough of a field test. Everything about this raptor feeding frenzy is stupid from start to finish, but at least the actors seem like they're having fun, especially Pappy. So at least somebody got some mild entertainment out of Planet Raptor. If only they had left it that way and not released it to the goddamn public.