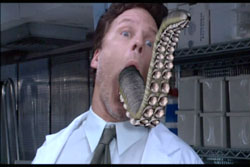 At some point an actor, no matter how unknown, has to wonder exactly what the hell he's gotten himself into.

After a brief exchange that doesn’t really advance the plot at all, the movie cuts to a Navy sea vessel. A group of hardworking scientists (we know they’re scientists because they’re all wearing white lab coats and using made-up words) are standing around what appears to be the world’s dirtiest fish tank. The creature in the container, they say, is so deadly and radioactive that it could “kill an elephant at 100 yards.”

So the scientists decide to do what any group of rational-minded persons would do: Pick up the container, which is made of glass, and carry it across the room. In a ship. During a powerful sea storm. And they don’t even use their full manpower – one scientist decides to walk beside the others and give them orders as they carry the thing around.

Maybe common sense isn’t something the Navy looks for when hiring scientists to observe a deadly sea creature. Whatever the case, when the scientists inevitably drop the case, one of them goes to touch the water coming out of it. After spending five minutes talking about the radioactivity of the container, then carrying the goddamn thing across the room, someone thinks it might be a bright idea to touch a puddle of bright green water spilling out of it. Luckily for him (and unfortunately for the rest of the scientific world) one of the other scientists pulls him away at the last second.

And here’s where the movie really goes to hell.

Don’t get me wrong. “The Thing Below” pretty much sucks as soon as the DVD menu starts. Until this scene, it’s just bad because it’s boring. As soon as the sea creature escapes its glassy confines, though, the film hits levels a person would expect from a company like “Hellfire Productions.”

But just looking like shit isn’t enough for the monster. Oh, no. Not only does it look like something out of a bad Playstation game, it also has to kill people. Badly. The next five minutes of the movie centers around the tentacle impaling people in various horrible-looking ways, none of which look even sort of plausible. In one scene, it impales a guy through the gut, comes out of his mouth, and chokes another guy. In another, it bursts through a door and stabs through two scientists. Instead of some good monster-movie gore, we get a bunch of shots that might as well be a sign that says “no, the monster’s not really there, but we tried.”