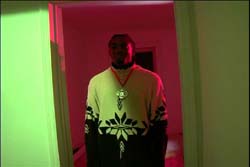 Sweater by Old Navy, home lighting by the Unreal Engine.Jakeem confronts the be-sweatered vampire mastermind in a scene that is as painfully unfunny as it is long. Khalil has a briefcase full of money. Jakeem has the amulet and Ray held at gunpoint. Jakeem is also deaf and incapable of reading lips. This is the core premise of an attempt at a humorous standoff between Jakeem and Khalil. Though it is absurdly amusing at first it goes on for more than five minutes before Khalil finally relinquishes the money. Jakeem tosses him the amulet. Khalil places it around his neck and there is a loud wind sound effect. It sounds quite brisk and it is fortunate that Khalil is still wearing his evil sweater. Jakeem mistakenly believes that the amulet has turned Khalil back into a human and he shoots the vampire mastermind. Instead the amulet has made Khalil even more powerful than a regular vampire, although the exact effect of the amulet remains vague.

He charges Jakeem but the master of unlocking manages to tear the amulet from Khalil’s neck and escape the compound. Khalil tasks Ray with recovering the amulet. Ray decides to instead recover Stacie and bring her back to the vampire knitting circle for interrogation.

Meanwhile, a team of vampire hunting commandos gear up to take down Jakeem and recover the amulet he stole from their modestly impenetrable safe. This team is spearheaded by a business-talking woman and a wiseacre with a penchant for throwing baseballs at people. The commandos spot Jakeem marching around dressed in all black with the giant gold and red amulet over his worn hoodie. They chase him down the street fairly ineptly.

This chase sequence includes the only bit of bizarre humor that made me laugh. As Jakeem is fleeing with the commandos hot on his heels he stops to fight with a fat white guy over the man’s bicycle. Jakeem wins and rips the bike from the guy’s hands. He hops on the ten speed, begins to pedal, is unable to figure out how to work the gears and throws the bicycle in anger. It’s very bizarre and unexpected but also quite funny. Don’t worry, good old Winston misses everything else he is aiming at for the remainder of the movie.

The commandos eventually catch up to and take down Jakeem and haul him back to their vampire commando basement lair. The baseball commando throws some baseballs at Jakeem, who is inexplicably reluctant to reveal why he stole the amulet or who he was working for. The commandos eventually let Jakeem go, but he joins forces with them when he realizes that Khalil and Ray have taken the one thing he loves; the woman that he crippled and who hates him because he tried to give her money. In the process of discovering this we do get to see Ray sniped by a guy with atelescopic sight on top of an SMG. 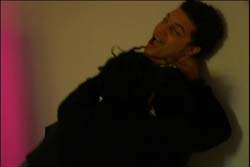 Tee-hee, someone's killin' me!The commando attack on Khalil’s lair runs into a few snags. First and foremost Kahlil has a harem of vampire women living with him who help him kill off the commandos one after another. The commandos do manage to take out one of the vampire women, but for the most part they do about as well as the actors that are playing them. By way of explanation, every time one of the commandos is killed he bursts out laughing hysterically as he meets what should be an agonizing death. When Khalil finishes off the female commando leader the only remaining foe is Jakeem himself. Jakeem takes on a vampire woman and wins, then discovers Stacie cuffed to her wheelchair which seems otherwise fine.

Stacie begs for Jakeem to open a safe that looks exactly like the other safes and has a timer attached. If he can’t get the safe open before the timer counts down then Stacie’s chair is going to blow sky high. As Jakeem strains his ears to hear the tumblers Stacie wails and shrieks needless advice like “open it!” and “come on, hurry!” Jakeem pauses repeatedly to tell her to shut up. As the timer counts down to zero she screams that she knows Jakeem was the one who crippled her and that he owes her. He then turns and stares at her until she explodes messily. I admit, I didn’t see that one coming.

Covered with gore and laughing like all of the dead commandos, Jakeem pulls himself out of the remains of Stacie only to be confronted by Khalil. Khalil batters him terribly despite the dozens of crosses he has hung over his neck. Khalil grabs the amulet triumphantly and puts it around his neck. Irony of ironies, the amulet burns Khalil. I think it’s because Jakeem put a cross on the back, although the audio is so terrible I couldn’t hear what he did. The grand finale of the movie is Khalil leaning over a used paint bucket, his winter sweater smoking profusely, a noncommittal moan of pain escaping his lips.

When daylight comes Jakeem is the only act in town. A cellular phone rings and Jakeem slowly drags himself over to it and answers. Someone needs a vampire hunter. Jakeem is about to tell them to fuck off when the man on the other end promises 10,000 dollars. Dare I hope for a Vampiyaz 2? I dare!