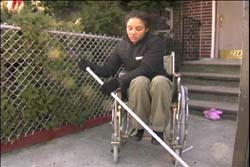 Baby, you might not remember me, but I'm the man who made your legs so damn sexy.The next day, week, eight years later, whatever, Jakeem is out and about in the old neighborhood when he spots the woman he turned into a cripple. Stacie is busy sweeping her walkway in front of her house from the comfortable perch of her wheelchair. Jakeem approaches her and at first pretends to be a random passerby. This confused me because you would think that the woman who Jakeem turned into a cripple might just remember his face. No dice! Jakeem ramps things up from random passerby to random flirtation and a vague friendship develops between the pair. This scene is probably the most awkward dialogue yet in the movie. Roughly half of the scene’s running time is devoted to uncomfortable pauses that interrupt the flow of the dialogue and make it seem like they’re waiting for a shrieking jet engine to go by every ten to fifteen seconds. Given the poor sound quality and general lack of editing I think it’s safer to chalk this scene up to terrible acting rather than phantom jet engines.

After his chat with Stacie, Jakeem runs into a shifty-eyed kid who recognizes him and seems well aware of his past crimes and prison stay. The kid is named Ray and he gives Jakeem an address to meet him at that night and promises to help Jakeem get back at Khalil “who sent [you] to jail.” Okay, here’s where that plot hole I mentioned earlier comes into play. Jakeem was left in the middle of the road by Khalil, shot with the same gun Khalil used to shoot the big baby, police sirens were clearly heard in the background, and yet Jakeem somehow was not found by police at the scene of the accident and Khalil turned around and framed him for murder. I’m just trying to make sure you grasp how mind bendingly terrible the plot is, because it’s about to get worse.

Jakeem heads to the rendezvous as planned only to find that Ray and Khalil have set up a trap for him. While he is talking to Ray Khalil uses magical vampire powers to sneak up behind Jakeem and then beat him up. Why is Khalil a vampire now instead of a dead body? No one knows, least of all the filmmakers responsible for “Vampiyaz”. When Jakeem regains consciousness he is tied to the ceiling. Ray is chewing on a severed human arm and Khalil is looking very smug in his sinister cape and dark suit with…oh no, wait, my bad eyesight has misled me. He’s actually wearing a festive winter fleece zip-up and looks as if he should be sipping hot cocoa rather than hot human blood. 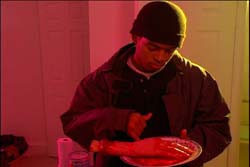 Delicious snacks!GAP Blacula wants Jakeem to do one last safecracking job. He wants Ray and Jakeem to break into a house, crack a well-guarded safe, and steal whatever waits inside. Jakeem is understandably reluctant to agree to this arrangement. Khalil offers him a monetary reward along with the warning that if Jakeem refuses Khalil will tear out his heart and feed it to Ray. “Nigga loves hearts” explains Khalil. Jakeem remains displeased with Khalil’s offer, but Khalil gives his old friend a chance to spend 24 hours considering his offer. Jakeem spends these 24 hours doing some further bonding with Stacie, who he pushes merrily along in her wheelchair. When Jakeem attempts to offer her money she grows indignant.

When Jakeem next meets with Ray the explicitly stated “Ghetto Renfield” gets mouthy about hot wheels and Jakeem is forced to drill him in the face. Once the fists have done their talking Jakeem accompanies Ray to vampire Old Navy to plot out their assault on the guarded safe. Ray offers up an initial strategy that fails to meet with Jakeem’s approval. Jakeem takes over the operational planning since he has such a sterling heist record. He forbids Ray from bringing a firearm and offers a giant truncheon as the solution to their guard problems. In practice Jakeem’s plan breaks down immediately. The guard waiting outside the building doesn’t buy into the distraction ploy, he spots the giant truncheon, and then Ray draws a hidden gun and shoots the man.

Ray pushes Jakeem at gunpoint into the building and up a flight of steps. At the top a brightly colored arrow shoots out and nearly hits Jakeem in the head. The continue up a second flight of steps and encounter one of the other guards who begins exchanging gunfire with Ray. The shooting deafens Jakeem who squeals about the scary noises like a puppy jammed inside an air raid siren. Ray takes out the guard and they head into the room where the safe is being kept. Amazingly, it looks identical to every other safe featured in the movie. I mean, I would almost believe that they just kept using the same safe in every scene. Jakeem sets to work but realizes that he can’t hear the tumblers through his stethoscope when his ears aren’t working. Then Jakeem notices that wires lead from the safe to an egg timer on the floor. A block of blue clay and part of a printer cable are also attached to the egg timer, a device that Jakeem clearly recognizes as a C-4 bomb.

Ray heads out for no particular reason and a guard arrives. He points his gun at Jakeem, who has his back turned while working on the safe, but Jakeem can’t hear the guard’s warnings to stop. The guard fires two warning shots over Jakeem’s head to no avail. He is about to take more resolute action when Ray returns from his trip and guns the guard down. A second bguard approaches from the front but Jakeem’s view of the man is still blocked by a wall. A heated gun battle erupts between Ray and the new arrival while Jakeem continues to work on the safe. This scene is intended to be comical. It is not comical.

Eventually Jakeem spots the guard and grabs a pistol dropped by Ray that is covered in feces. Yes, it is literally covered with shit. Jakeem shoots the guard in the leg and Ray finishes the man off. Jakeem finishes cracking open generic safe number three and finds an amulet inside. Now armed with the poop gun, Jakeem takes charge of the situation and marches Ray back to Khalil’s lair.