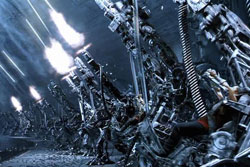 Oh, these guys? Just a crew changing out some light bulbs. Yep, Zion: model of efficiency.Trainee user Alucard arrived for his third training session. Booted the user into the Safetrix live training environment and began the advanced skill loading course. User seemed pleased with his own appearance within the training environment and commented several times on how "cool" he looked.

User demonstrated above-average overall skill absorption and retention. He performed very well with the firearms and hand-to-hand combat loads, particularly favoring the use of a katana in addition to his custom-designed handgun. He performed average or above average with all other skill loads with the exception of socialization skills such as charismatic lying and speed seduction.

The user attributed these shortcomings to self-diagnosed Asperger's syndrome, which he claimed, "has caused problems for years." Brain activity showed no indication of a physical disorder.

Following the training and the completion of the basic unit, the user initiated an informal dialogue that lasted for several minutes.

Alucard (User): I have been thinking a lot about this Matrix stuff. Basically, the Matrix version of a person looks like kind of an idealized version of the person, right?

Asmodeus (Operator): Correct, although it's much less conscious among those still immersed in the Matrix

Alucard (User): And everyone is just sitting in those little pods full of goop?

Asmodeus (Operator): Other than free born, such as myself, and those like you that have been rescued from the Matrix.

Alucard (User): Alright, I've got all that, but what about fat people? 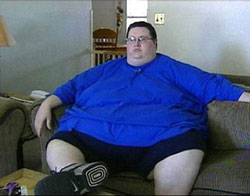 We're gonna need a bigger jump program.Alucard (User): Well, fat people were all over in the Matrix, some of my best friends in the anime club were fat, but I don't see how you can get fat if we're all eating the same amount of nutrients from the same source.

Asmodeus (Operator): Metabolisms vary. We have pulled a few fat people out of the Matrix, but generally-

Alucard (User): Okay, fine, but what about super fat people? Like, I saw a TV show about this guy who was so fat he couldn't get out of bed. He weighed like 1000 pounds and he was married to this woman who cried all the time and fed him cookies. Is he like that in the real world?

Asmodeus (Operator): It is possible, but very unlikely.

Alucard (User): So it's like a subconscious thing? Like a dude couldn't get so fat he was stuck in one of those pod things like this guy I saw on a water slide one time?

Asmodeus (Operator): I seriously doubt it. Is that all?

Alucard (User): One other thing. When you load those skills into my head or whatever you call it, why don't you just load them all at once?

Alucard (User): But, like, have you ever tried just dumping them all into somebody's brain?

Asmodeus (Operator): No, it would take a really long time.

Alucard (User): How many hours do you have left today?

Asmodeus (Operator): Eleven, give or take, but it's against the rules to dump skills like that.

Alucard (User): What are you, a fag chicken?

Asmodeus (Operator): What? No! You're not supposed to- 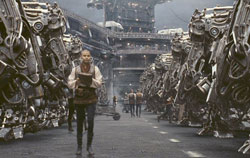 How about I download some skills that will allow you to not be a huge douchebag.At the user's insistence - against my better judgment - I began a marathon download that lasted just shy of eleven hours. After the combat skills I downloaded language skills. Once he finished with the major languages he insisted I start downloading ancillary skills.

Even though he was nearly exhausted, I gave him SCUBA skill, skateboarding skill, rhyming skill, and body-popping skill. After doing the robot for more than fifteen minutes he collapsed from exhaustion and I was forced to bring him out of the Safetrix. Despite his weakened state, the user thanked me for obeying his wishes.

I consider Alucard's training to be completed and have already filed a ship assignment document with Humanity's Last Hope Resources.

Status: Closed
Flagging: Full training regimen completed by Alucard (0010).
Supervisor Citation: I warned you about not following procedure. From now on if you deviate from the script even once I will have your ass sent back down to the potty farm. - DieHardFan