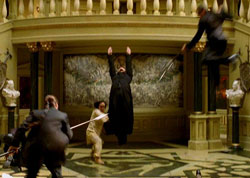 Anyone can karate fight a bunch of sword-wielding assassins. Show me a user that can actually listen to simple instructions.Trainee user Alucard arrived for his second training session. Booted the user into the Safetrix white room and began basic familiarization. User demonstrated adequate firearms proficiency against dummy targets. The user became very excitable during the training and tended to stray from instruction parameters.

Alucard (User): So there are these guys who will try to fight me and they're computer programs?

Asmodeus (Operator): Most of them, correct. Some programs piggyback on human carriers.

Alucard (User): And all of these guns and stuff aren't real, they're just more computer programs?

Asmodeus (Operator): They are constructs, yes.

Alucard (User): So can I have a laser or some sort of disintegrator that just one-shots them?

Asmodeus (Operator): No, you can only use weapons that exist within the cohesive artificial reality of the Matrix.

Alucard (User): What about a nuclear bomb?

Alucard (User): What about something that's possible, but just hasn't been invented yet?

Asmodeus (Operator): I suppose that could work, but it must function exactly as it would in the real world.

Alucard (User): What about those robot suits the Zion army guys wear?

Asmodeus (Operator): They would attract too much attention in the reality of the Matrix.

Alucard (User): But they would work?

Asmodeus (Operator): Theoretically. They can be simulated in the Safetrix. 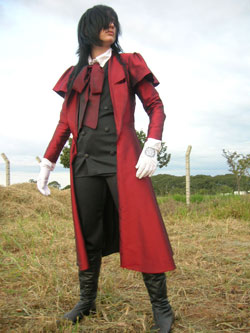 Pretty average look for a user. Asmodeus (Operator): Yes, there is a database of-

Alucard (User): Exactly, and I bet if you look a laser rifle or a disintegrator gun is in there somewhere. So why can't I just get one of those guns out of the old database and use that? I want something awesome.

Alucard (User): Are you there?

***Asmodeus (Operator) has signed out of the logging system off or is no longer available.

After removing the user from the white room I discussed the issue further with him. After a lengthy debate with him I agreed that I could reproduce a fictional weapon he called a "Hellsing ARMS .454 Casull Auto." I warned him that it would be unwieldy and ridiculous, but he insisted.

The user also wanted to know if he could wear a red hat, trench coat, and have vampire fangs within the Matrix. I informed the user that this would hardly look out of place among our operatives and he seemed pleased, making a reference to a location or group called "Otakucon."

Alucard seems capable, but not exceptional. I have passed him for today's course based on his shooting scores and above-average skill absorption and retention. I do, however, have serious reservations about his mental stability. 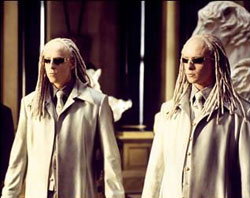 I swear the machines are putting together some sort of monster party. A mash, perhaps.I received a priority one call from a Matrix user out of contact with his ship and in need of tactical assistance. Operative SexiGurl24 was trapped inside a warehouse in the docks district and was being pursued by an obsolete security program known as the Mummy.

This program presents as an elderly man wearing a beret and moves very slowly, but is capable of tracking targets over long distances. Once it comes within earshot of a target it will begin to tell recursive anecdotes that hypnotize and paralyze the target. The Mummy can then dispatch a target with a poisonous gas emitted by its pipe or simply await the arrival of another program.

I began to walk the user through the procedural checklist for escaping from the Mummy, but the user grew irate and insisted I forego the usual checklist and "get to the [expletive] point." I gave the user the instructions to reach the nearest active hard line and concluded with the advice that she cram her ears with the bovine excrement she was giving me. She inquired whether or not my "tiny [term for a phallus]" would fit in my own ear. I suggested she use her fingers in lieu of either.

The user then terminated the connection so that she could plug her ears and avoid the Mummy's hypnotic anecdotes. I later learned that she escaped unharmed.

Status: Closed
Flagging: None
Supervisor Citation: You MUST follow procedure on all calls. See me in my office on top of the giant rotating cogs ASAP. - DieHardFan