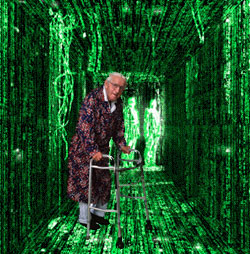 Whatever super computer over there in the evil data center is writing all these programs is seriously messed up.I received a priority one call from a Matrix user out of contact with his ship and in need of technical assistance. Operative Springsteen explained that he had become stuck in a terrain feature while moving with other operatives to find a magical chess piece or something. I didn't care about the details of the mission, but it sounded like the usual hung up on a wall with an invisible collision box larger than the wall.

I instructed the user to try walking in the opposite direction. This did not work, possibly because the user spent several minutes trying to escape before placing the call. The user became irate with me and demanded to know my name. I informed him of my name. He continued to hurl abuse, so I reminded him that the Matrix is an illusion and that anything is possible.

I instructed the user to visualize his genitalia growing in size and flexibility until it was capable of looping back around between his legs all the way to his rectum, allowing him to have intercourse with himself. He realized this suggestion was not literal and continued to hurl verbal abuse at me.

User became very concerned that he was in danger of being located by agents or similar hostile programs and he asserted that if he died it would be my responsibility. I informed the user that if he believed it was urgent that he escape he could chop or shoot his foot off with a gun. While the user continued to hurl invective at me I loaded a hulk program into his memory. I then instructed the user to punch apart the wall he was adhering to and then locate the nearest hard line.

The user followed my instructions and was able to restore contact with his ship. He declined to offer his thanks. 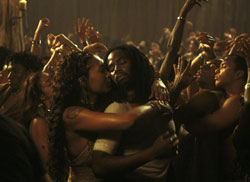 Some days I just sit by my desk during my lunch break, because this is what the break room looks like.Arrived less than five minutes late to work and was called into supervisor DieHardFan's office. I was given the "desert of the real" speech for the second time this month. War for the survival of mankind, blotting out the sun with nuclear fire, the short and heroic existence of our Matrix operatives; I've heard it at least a dozen times total. Nothing motivates punctuality quite like being given an overwrought speech first thing in the morning.

Yes, DieHardFan, my slight tardiness is akin to betraying our species. Thank you for that pep-talk.

It was almost a relief when this ticket popped up on one of my screens. A fresh red pill had arrived in training room ten and I was assigned to mentor him through the Matrix process.

Every part of my job is my least favorite part of my job, but mentoring the brats and morons that just found out their whole reality is artificial is the worst of the worst. My latest trainee turned out to be a scrawny kid no more than 14 with terrible acne, a rabbit's overbite, and one of the lamest names I have encountered: Alucard.

He makes the tenth Alucard I have trained. The only name more popular is Goku and it is followed closely by Neo. They're all unimaginative loser names and the kids that come in with them rarely survive their first week as an operative.

I headed down to the training room and introduced myself. It's the only time I ever meet them face-to-face. After that I'm just a voice over the intercom or on the other end of their trainee phone in the Matrix. We strap the trainee phone to their ear so they can't get lost in the Safetrix, our training version of the Matrix.

He seemed like a nice enough kid, but he was dumb as a post. I gave him the rundown on the Safetrix and how his life up until now was a lie told to him by supercomputers using him as a battery. No one has figured out how the science behind that one works, the smartest guys just sort of say, "It also uses fusion," and then their voices trail off.

Anyway, Alucard got the ground rules and he bought the whole human battery thing, so then I laid the rule book on him. I might as well outline it here as well. It's called the Protocols of the Learned Operators of Zion. The rules are:

2. If you can't get to a hard line then ask for help finding a hard line.

4. Be polite and be patient.

6. Don't ever pretend you know more than an operator.

7. You don't know more than the operator.

That last one is always the sticking point. Every user thinks they know more about the Matrix than an operator and most of them have already screwed up their situation further just by thinking they know more than they actually know.

Alucard seemed to get it, so I told him training would start tomorrow and I sent him on his way.

Status: Open
Flagging: Introduction to the Matrix - Fundamentals. Course completed by Alucard (0010).
Supervisor Citation: Inappropriate subject matter and informal tone. You need to adhere to the rules as outlined in your copy of the Protocols of the Operators of Zion. See me ASAP - DieHardFan