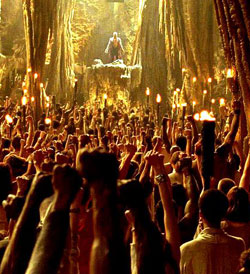 Maybe, like, this cave is the computer, and the computer is the real world. *smokes drugs, quits shitty job*I received a priority one call from a Matrix user out of contact with his ship and in need of tactical assistance. Operative Alucard (0010) was being pursued through the A-Maize-ing Maze at Knott's Farm by the Mummy.

I continued with proper procedure, instructing the user to activate his phone's restart code to reset its operating system. The user expressed some concern that the procedural checklist was taking too long and that the Mummy was closing on his position. I instructed the caller to remain calm and press and hold pound and star. I heard the tone that indicated he was following my instructions.

The user stated that he was complying, and then exclaimed that he could hear the Mummy speaking. I advised him to wait for the phone to finish resetting to determine if the cellular signal loss was due to software error. He mentioned that cellular signal loss was not his problem at the moment and inquired as to why I was being, "so [expletive] retarded" by having him reset the phone he was using to speak with me.

At this point the user became unresponsive to my instructions and began muttering about "pre-dive checks." I could also hear a second voice, muffled by distance and the position of the phone.

The last words spoken by the user were, "Confirm that you have ample air for the dive and confirm that your valves are open, that regulators and alternate air sources..."

At that point I began to clearly hear the words being spoken by the Mummy. It was something about, "the time your grandmother and I went to Cape Cod for a summer." I disconnected from the call after hearing the distinctive tone of a poison gas release.

Status: Closed
Flagging: Operative Alucard (0010) Deceased
Supervisor Citation: Not bad, but you need to work on your flexibility under pressure. - DieHardFan 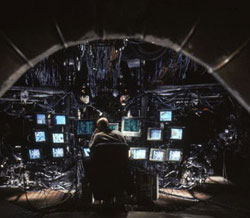 Time to get back to work, sit behind the 15 monitors, and wait for some mechanical squids to come eat my face with a laser.No happy ending, I'm sure you're thinking. Guess what? There is no happy ending in Zion. Period. Ever.

This grim asshole of planet earth is the last hope for mankind, but it's the sort of hope that makes you want to stop hoping. You've got rules lawyers like my boss forcing us to act like robots and then screaming at us to be more flexible when it gets someone killed. You've got the dipshit users that don't know how to get away from an old man that moves at about a mile an hour. These are the guys you want running the rules instead of the machines?

Christ, the machines. As much as I want to pretend that I don't care who wins, I guess I do, because what sort of fucking asshole of a computer comes up with an old man that chases you around telling anecdotes? It's just fucking sadistic.

Do I feel guilty about that kid getting killed? Nah, dead operatives grow on trees, but I feel bad that he was ever pulled out of the Matrix. What I wouldn't give to just sit around and play video games and watch Japanese cartoons while I get fat. It's a common sentiment here. Leads to all kinds of backlash like that Cypher incident last month.

But, you see, I'm not wired. It's not even an option for me. I am a dead-ender working a dead-end job.

Welcome to the desert of the bullshit.